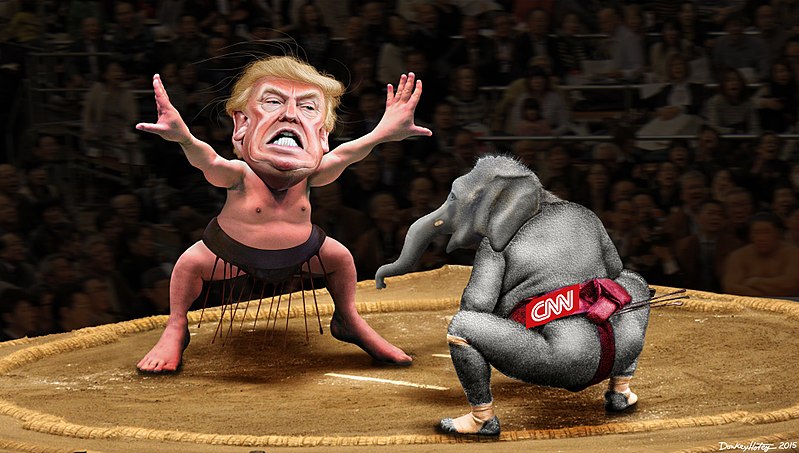 commons.wikimedia.org/wiki/File:Trump_vs._CNN.jpg
I thought the press coverage of President Trump was slanted but I didn’t think it was this bad.

The obvious bias has now been quantified in new research done by Pew Research Center looking into the negative stories on the president.

Over Trump’s first 100 days in office, 24 different media organizations found that reporting on the president has been the most negative of any other president who has been in office over the past 25 years. Research further revealed that only 5 percent of the media’s reporting during this period was positive while 62 percent was negative and 33 percent neither positive or negative.

The sad thing is that the mainstream media coverage has focused not on Trump’s specific policy proposals for the most part, but went to his character. Only 31 percent of all stories put out on Trump were focused on policy issues, Pew found, compared to 50 percent during Obama and 65 percent during Bush.

“The evaluations of President Trump were far more negative and less positive than those of his predecessors,” wrote the Pew Research Center. Well, that’s putting it mildly.

The mainstream media despise Trump and have been working hand in hand with the Democratic Party and the Deep State to remove President Trump from office since the day after he was elected. Evidence is now being brought forward for those that were still not convinced of the media’s utter bias against the president. At least, they are starting to be called on their failure to be objective by their declining ratings and the rise of alternative media. While the media continues to pounce on Trump’s low approval ratings, theirs are even lower. A recent charitable survey showed that only 36 percent of Americans approve of the mainstream media while 50 percent disapprove.

Here were the main topics covered by the Fake News media:

Ever since Trump was elected and America realized how racist they really are, much of the media coverage has sought to amplify this point and further divide the country, all while questioning the legitimacy of Trump’s presidency. He lost the popular vote after all! So freaking what? That’s not how it works. And thank God for that!

At least the Russian conspiracy story seems to finally be disappearing from the headlines and segments on television due to the fact that it has no legs and there is nothing to it. Zero evidence of collusion. Trump won. Deal with it.

The media continues to blast out erroneous reporting from anonymous sources within the intelligence community. FBI Director Comey discredited a February 15 front page story in The New York Times that claimed that members of Trump’s 2016 presidential campaign “had repeated contacts with senior Russian intelligence officials in the year before the election.”
At the time, The Epoch Times noted many flaws in the report, which The New York Times used to push its ridiculous collusion narrative. Comey called this story almost entirely wrong as he went on to discuss further inaccurate reporting by other media organizations. He said there have been many stories about the Russia investigations “that are dead wrong.”

Another fake news story was put out just this past week when Secretary of State Rex Tillerson responded to a story published by NBC News earlier this week which claimed Tillerson had considered resigning as they try to create divisions with the actual Trump White House. Fake news knows no bounds!

Tillerson told reporters that the story was false and he never considered resigning. NBC doubled down on its false reporting, however, and said they fact checked it and everything. The secretary rightly told us that the media is trying to divide the people. Ya think?

“This is what I don’t understand about Washington. I’m not from this place. But the places I come from we don’t deal with that kind of petty nonsense. It is intended to do nothing but to divide people. I’m just not going to be part of this effort to divide this administration,” Tillerson said.

President Trump was right when he called out Fake News NBC saying that “Rex Tillerson never threatened to resign. This is Fake News put out by @NBCNews.”

The mainstream media are a joke and they are trying to topple Trump by whatever means possible. Proof has now been put forward by Pew Research showing the bias inherent in the media that is throwing facts out the window for stories showing Trump in a negative light or failing to report on stories that put him in a good one. We need objective reporting. We need the truth and nothing but.

That’s why you go to sites like IWB and other alternative media for the real news. Nothing fake!