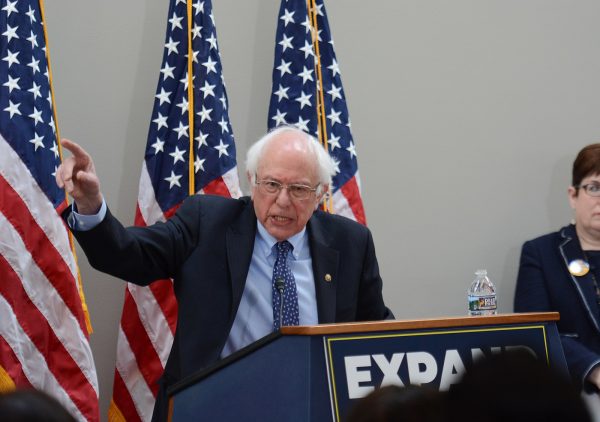 Bernie Sanders is on a roll, and this is absolutely terrifying many establishment Democrats.  He has raised far more money that any of the other Democratic candidates, he just took the lead in a major national poll, and a Fox News town hall featuring Sanders was just watched by nearly 2.6 million viewers.  You would think that the Democratic establishment would be thrilled to see such enthusiasm for one of their presidential candidates, but instead they are totally freaking out because they don’t want him to be the nominee.  On Tuesday, the New York Times published an article entitled “‘Stop Sanders’ Democrats Are Agonizing Over His Momentum”, and in that article we are told that “his critics are chiefly motivated by a fear that nominating an avowed socialist would all but ensure Mr. Trump a second term”.  And of course those critics are right.  If Sanders is the nominee, that will give Trump the best chance of winning again in 2020.  It would be a complete and total nightmare for the Democratic Party, and so in order to avoid that scenario some Democratic operatives are already plotting how to sabotage the Sanders campaign.

Right now there are 17 Democrats running for president, and it looks like Joe Biden will jump into the race very soon.

But most of the other candidates have not gained any traction at all, and a brand new poll that just came out actually shows Sanders beating Biden…

Sen. Bernie Sanders finished ahead of Joe Biden in the first major national poll of the year that did not find the former vice president leading the pack of potential 2020 Democratic presidential candidates.

When asked whom they would support from a list of 20 candidates – including “someone else” –  29% named Sanders, and 24% named Biden in an Emerson College poll released Monday. They were trailed by South Bend, Indiana, Mayor Pete Buttigieg, who was the pick of 9% of likely Democratic primary voters.

What is even more important is the trajectory of the support for the two candidates.  Biden’s support appears to be dropping because of his history of “inappropriate touching”, and support for Sanders has risen 12 points since February…

“Biden has seen his support drop. In February, he led Sanders 27% to 17%, and in March, the two were tied at 26%. Now, Sanders has a 5-point lead,” said Spencer Kimball, director of Emerson Polling.

If Biden ends up flopping as a candidate, establishment Democrats are going to be in quite a quandary because nobody else is even polling in double digits at this point.  Perhaps someone like Pete Buttigieg will end up catching fire, but there is no guarantee that will happen.

As it stands today, there is a very good chance that Bernie Sanders could be the Democratic nominee, and many establishment Democrats are trying to figure a way out of this mess…

From canapé-filled fund-raisers on the coasts to the cloakrooms of Washington, mainstream Democrats are increasingly worried that their effort to defeat President Trump in 2020 could be complicated by Mr. Sanders, in a political scenario all too reminiscent of how Mr. Trump himself seized the Republican nomination in 2016.

How, some Democrats are beginning to ask, do they thwart a 70-something candidate from outside the party structure who is immune to intimidation or incentive and wields support from an unwavering base, without simply reinforcing his “the establishment is out to get me”’ message — the same grievance Mr. Trump used to great effect?

Of course if Sanders supporters get the impression that the nominating process is being rigged against their guy again, that could cause a full-blown civil war in the Democratic Party.

Needless to say, Republicans would absolutely love that.

But despite that danger, establishment Democratic operatives such as David Brock are publicly talking about sabotaging Sanders…

“There’s a growing realization that Sanders could end up winning this thing, or certainly that he stays in so long that he damages the actual winner,” said David Brock, the liberal organizer, who said he has had discussions with other operatives about an anti-Sanders campaign and believes it should commence “sooner rather than later.”

Once this New York Times story came out, it was inevitable that there would be a tremendous amount of backlash from Bernie supporters.

For example, Bernie supporter Katherine Krueger very quickly released a response piece entitled “I’m Going to Have a Rage Stroke Over This Story About Dem Elites Trying to Take Bernie Out”…

I’m spent. I want nothing from these people; in fact, I’d prefer they retire from politics entirely for their role in losing what was arguably the most winnable presidential election in modern history. Neera Tanden might punch me in the chest for saying this, but that’s OK!

It’s insanely telling that the people featured in this story—who call themselves “progressives,” despite being wedded to deeply middle-of-the-road centrist policies—are so threatened by a candidate who, after being screwed by them in 2016, isn’t inclined to make concessions to the vast, useless apparatus of consultants and donors that they represent. Of course they want to stop Sanders. He’s sworn off big money, has actual progressive policy ideas, and is thumbing his nose at scolds like Tanden and her cronies! If the voters choose Bernie, he should be the nominee. End of story. If you’re the kind of person who would tack a “but,” onto the end of that sentence, you’re probably more wedded to rewriting the perceived wrongs of 2016 than actually taking back the White House in 2020.

The fact that Bernie Sanders has so much support shows how much America has moved to the left in 2019.  He represents just about the opposite of everything that our founders believed in, but a large percentage of the nation is embracing him anyway.

But could a self-described socialist actually go all the way and win the entire thing?

Probably not, and that is why establishment Democrats are so freaked out right now.

There is still plenty of time, and a lot can change in the coming months.  But at this moment, many are describing Sanders as the front-runner…

“Right now, he is the front-runner,” said Karine Jean-Pierre, the chief public affairs officer for MoveOn, a progressive group. “He is leading in the fundraising. He is leading in the polling — except for Biden, who has not jumped in yet. … Bernie’s start has been impressive. Clearly his base is still with him and still excited.”

Of course there is one Democrat that would beat Bernie very easily, but she has insisted over and over that she is not running.

However, the stronger the Sanders campaign gets, the louder the calls for her to run will become.