The entire world’s ruling elites are silent because they’re terrified that even mild murmurings might limit the blood-soaked billions they want to reap from trade with China.

Imagine the reaction in the global Muslim community if a western nation imprisoned hundreds of thousands of Muslims solely for being Muslim and subjected them to torture, “re-education” that amounts to treating their religious faith as a pathological mental illness, forcefully separating parents and children, incarcerating the children in state-run orphanages, and on and on in a ruthlessly efficient Nazi-like systemic oppression.

The Muslim “street” would erupt in mass protests, burning flags and calling for the downfall of The Great Satan, and the Muslim nations would cancel energy and trade contracts and lodge diplomatic protests.

But the global Muslim community, and indeed, the entire global community, is strangely silent as China pursues a high-tech suppression of its ethnic Muslims. This silence might be the one thing Tehran, Moscow and Washington have in common: a complete and utter disregard for China’s Muslim-only gulags.

While America’s ruling elite greedily rubs its hands over the wealth that will flow from a “trade deal” with China, where is America’s vaunted concern with human rights? Nowhere to be found. Where are the canceled energy and trade contracts between China and Iran, Turkey, Pakistan, Egypt, Indonesia, Malaysia, Iraq, Syria, Saudi Arabia, the Persian Gulf States and other Muslim-majority nations?

See also  Just looked at the news. Did we switch timelines to Crazy World?

The entire world’s ruling elites are silent because they’re terrified that even mild murmurings might limit the blood-soaked billions they want to reap from trade with China. That is the source of the world’s hypocritical silence about China’s Muslim-only gulags: the endless, insatiable, boundless greed of the ruling elites.

There’s a funny little thing called karma, or blowback if you prefer a secular label, and both China and its vast host of global ruling-elite enablers will eventually reap what they are sowing.

China employs vast armies of propagandists in the West whose favorite word is “debunked.” You can easily identify a Beijing-propaganda proxy by their use of “debunk” to counter any criticism of China’s Muslim-only gulags.

Meanwhile, the alarming reality has been covered in depth by what little remains of the global free press. If you look at only one article, start with this photo-essay: How China Turned a City into a Prison (New York Times)

See also  China's take-over in America's back yard: How Beijing has spent $140BILLION on ports, roads, and power plants in Latin America and the Caribbean as Cuba signs a new energy deal while US influence fades

Satellite images show expansion of ‘re-education’ centers in China’s Xinjiang region China has sharply expanded an internment program that initially targeted ethnic Uighur extremists but is now confining vast numbers of the largely Muslim minority group, including the secular, old and infirm, in camps across the country’s northwest.

Up to one million people, or about 7% of the Muslim population in China’s Xinjiang region, have now been incarcerated in an expanding network of ‘political re-education’ camps, according to U.S. officials and United Nations experts.

China Is Treating Islam Like a Mental Illness The country is putting Muslims in internment camps—and causing real psychological damage in the process.(TheAtlantic.com) 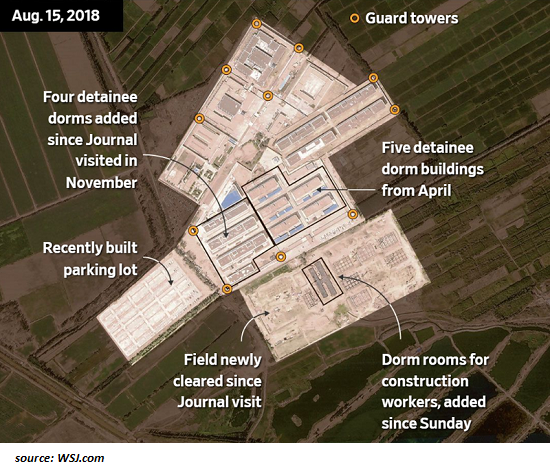