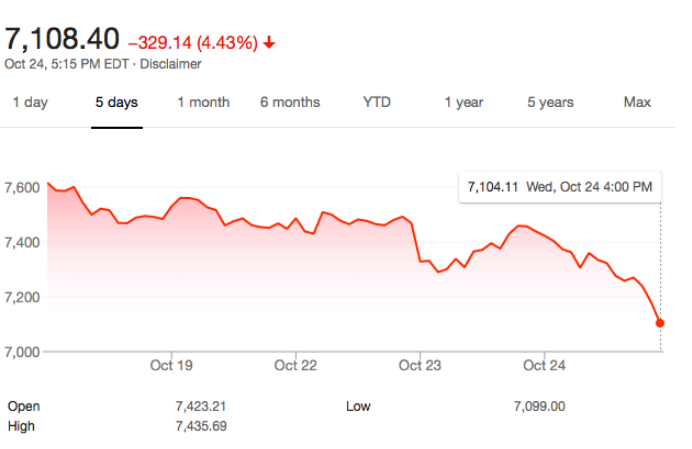 The Dow Jones Industrial Average dropped 2.41 percent on Wednesday, falling 608 points. The NASDAQ shed 329 points, a 4.43 percent decline in one day. The S&P 500 suffered a more than 3 percent loss too, losing 84 points yesterday.

The Everything Bubble will burst starting with the inevitable correction and crash of the U.S., European, and Asian stock markets. The eye-opening losses seen on Wednesday were a continuation of what occured on Tuesday when European stocks hit a two-year low and U.S. equity futures finished deep in the red.

In the past eight days, not even including Wednesday, $4 trillion in value has been lost in the stock market. The significant losses this week and through most of October have more than erased the U.S. market’s gains from earlier this year, when all President Trump could talk about was the record-setting but unsustainable pace of rising stock values. Stocks are now falling precipitously as the market is betting on on more interest rate hikes as we close the end of the year. Investors are also selling because of the politics being played in the dangerous trade war Trump is playing with China. 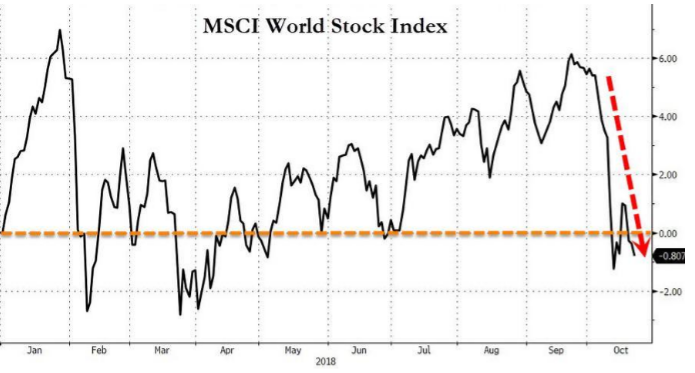 Even though the stock market’s sizable drop this week is disturbing, it should not be all that surprising. It was bound to happen sooner or later. Now the only question is how long will it continue and how bad will it get?

“Everybody knew this was coming — stocks are close to record valuations and it was a matter of when it was going to happen, not if,” said Dan North, chief economist at Euler Hermes North America. “I would expect that at this point, it’s probably sentiment-driven and we’ll get a rebound.” I’m not so sure about the rebound though. We’re heading into correction territory.

Peter Schiff had a more dire explanation for the current trajectory of the stock markets. It’s not just the trade war, or the financial problems in Italy, or political posturing over what to do with Saudi Arabia. He says we are very likely now in a bear market.

Are economists, politicians, and the media in denial about the dark clouds hanging over the American economy? Is it only a matter of time before it all comes crashing down? Will we be blindsided by what was inevitably going to happen? Unfortunately, it appears the party is coming to an abrupt end as we have seen with the steep drop off in stocks this week. There’s no more denying it. Surely, Trump will get blamed for it because presidents always get either too much credit or too much blame for the economy.

The 2020 presidential election will be all about which party is to blame for the stock and real estate market collapse and the worst recession in U.S. history. Trump will blame the Democratic Congress and the Fed; Democrats will blame Trump, tax cuts, deregulation, and tariffs.

Schiff has been sounding the alarm of a market collapse for quite some time now. With this week’s stock market correction showing few signs of slowing down, his concerns are being validated.

“Here this stuff is now happening, that I’ve been forecasting — these are the sure signs that the collapse is near,” Schiff says. Yet, the mainstream is completely oblivious because they have no idea there’s a problem. If you don’t know you’re in a bubble, you don’t see the pins. I’ve been calling this bubble for a long time and finally, it’s pin, pin, pin, right? And nobody sees it.”

Still don’t think it’s that bad? Here are a few more statistics to paint a more complete picture of the current situation: 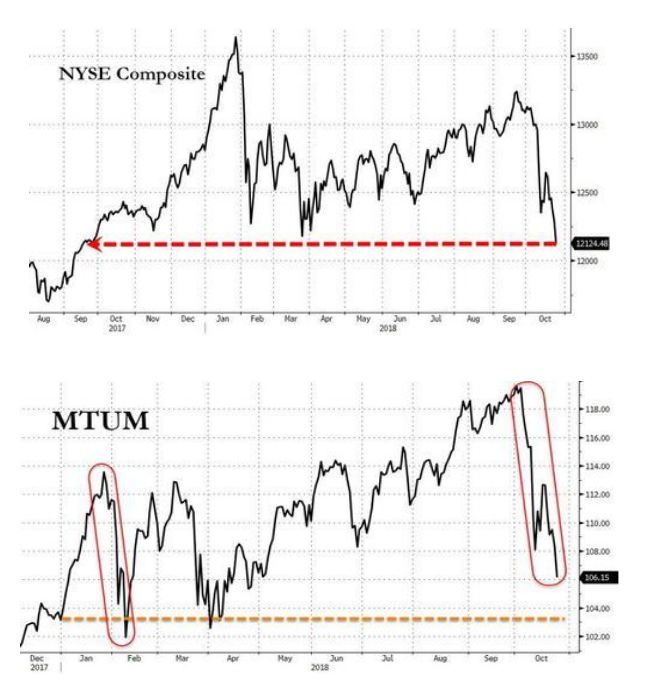 Oh yeah, and the U.S. housing market is in freefall… 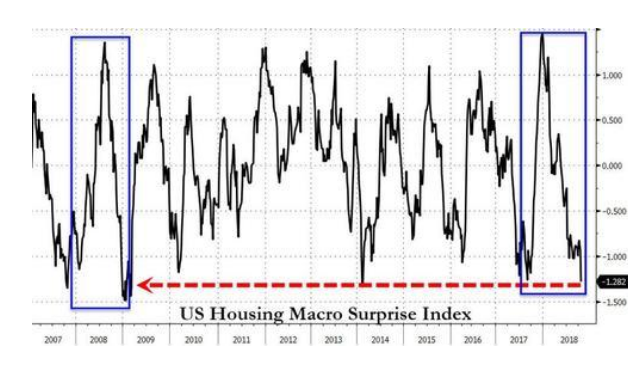 Get ready for the bubble to finally burst. Get ready for the Republicans to be blamed for this upcoming crisis. Get ready for a Democrat president in 2020. The next great recession is coming and this one could very well be worse than the last one that started a decade ago. Better buckle up!