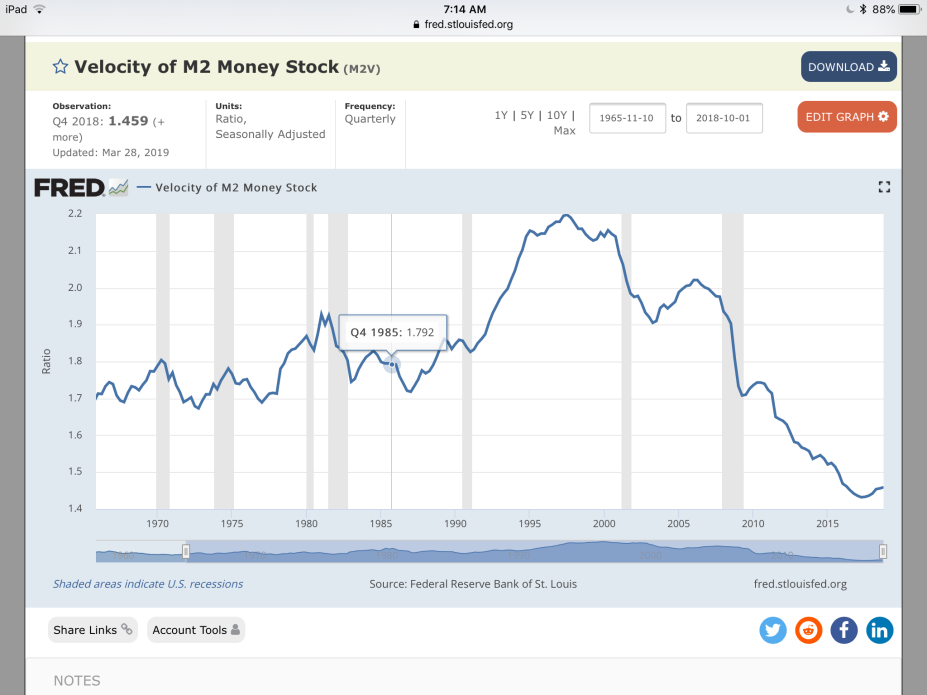 “There is no means of avoiding the final collapse of a boom brought about by credit expansion. The alternative is only whether the crisis should come sooner as the result of a voluntary abandonment of further credit expansion, or later as a final and total catastrophe of the currency system involved.”
– Ludwig von Mises

The Federal Reserve chart above only goes back to 1970, but its message is clear, nevertheless. The velocity of money has dropped below that which was necessary to maintain a productive economy in 2009 and has never recovered.

The velocity of money can be defined as, “the rate at which money circulates or is exchanged in an economy in a given period.” It’s generally measured as a ratio of gross national product (GNP) to a country’s total money supply.

No money turnover… no economy.

But, if that’s so – if the chart is correct and the money turnover is by far the lowest since 1970 – why did the economy recover after 2010 and why are we in a bull market? Surely, the quantitative easing programme initiated by the Fed corrected the problem and happy days are here again.

Well, actually, neither of those commonly-held assumptions is correct. Quantitative easing didn’t pump money back into the failing economy and, more to the point, it wasn’t intended to. Most of the money that was created through quantitative easing never actually hit the streets.

To back up a bit, in 1999, the Fed, then under Alan Greenspan, convinced the US government, then under President Bill Clinton, to repeal the Glass Steagall Act, an act created in 1933 to assure that banks would never again recklessly create loans to the public that could never be repaid. Mr. Greenspan argued that the Great Depression was long over and there would not be a reoccurrence but that, if the Clinton Administration would repeal Glass Steagall, it would usher in an era of investment of borrowed money that would create the greatest surge in business since World War II.

And he was correct in his argument. The repeal ushered in a period of reckless loans that accomplished two things – it allowed the Clinton Administration to end on a positive note – one in which the economy appeared to be vibrant. However, it also created a mammoth debt bubble.

As is always true, the creation of massive debt is like a shot of economic heroin in an economy. The euphoria is very real. Unfortunately, so is the withdrawal. This withdrawal kicked in with the real estate crash of 2007.

The Fed (which, if you remember, had created the bubble) recommended that, although the bankers had benefitted enormously through the creation of the debt, they were now in trouble. Rather than have them pay for their misdeeds, the Fed Chairman put forward the concept of quantitative easing (QE). Through QE, the government would pump money into the banks to bail them out. Therefore the banks benefitted hugely from the reckless loans, then benefitted hugely again, through the debt-funded QE.

The pretense was that QE would be used to pay off bad loans, re-energising the economy. And, interestingly, enough money was pumped into the banks through QE1, 2 and 3 to literally write off every mortgage in the country. Had that been done, those cleared of debt would indeed have had the ability to re-invest in the economy.

But that isn’t what happened. Very little of the money that was created actually hit the street. It was simply gobbled up by the banks.

A by-product of the crash is that it brought on the Greater Depression. Real income has not increased since 2007, but inflation has. Although the US government claims inflation to be at 1.52%, it’s actually far higher – over 5%.

Likewise, unemployment is claimed to be at 3.8%, yet the real unemployment rate (as calculated by John Williams’ Shadowstats) is over 21%.

By any of these measures, the US is unquestionably in a depression.

But, hang on, what about the markets? The stock market is booming. Yes, quite so. It has become the norm for companies to buy back their own stocks. Although, this is economically dangerous, it does temporarily inflate the apparent value of the stocks and politicians do point to the stock market boom as proof of their sound fiscal management.

And, of course, there’s the bond market. It’s at an all-time high.

But bonds are debt, plain and simple. And a bond is merely a promise to pay the lender back with interest on a future date. The more bonds in the market, the more debt.

And so, we see a boom in markets that’s a false-reading. It was created entirely through debt and that debt is now in a bubble of historic proportions.

All of the other indicators (if we use the correct figures, not the ones the government has helpfully ginned up) confirm that the US is decidedly in a depression.

But, if that’s so, why doesn’t it feel like a depression?

Well, the answer to that is, once again, the economic heroin. At this point, the regular injections of heroin are massive enough to provide a euphoric high. The only problem is that, when the heroin runs out, the withdrawal will be one for the record books.

What goes up must come down. And, if there remains any doubt as to whether, this time around, the Keynesian tooth fairies have some sort of pixie dust that will make the problem go away, we need only have a look at the chart above, which was produced by the Fed itself.

In the real world of Main Street, the velocity of money has declined dramatically since 2009 and has tanked in 2017, unable to recover.

Conditions overall could not be worse for a crash more massive than any the US has ever seen in its 243 year history.

At present, all that’s holding up the house of cards is the mistaken faith that the average citizen has that the false numbers are correct – that his country is bumping along nicely. When he figures out that that was a lie, it’s game over.

All that’s required to eliminate the notion and to send the economy into a tailspin is a black swan event.

Any one of these and perhaps another dozen other black swans are waiting in the wings. All that’s needed is for one of the swans to walk onto the world stage.