Amazon is partnering with police agencies and intelligence agencies to provide them facial recognition technology that can track and surveil the entire public.

The ACLU (American Civil Liberties Union) is ringing alarm bells trying to get people to take notice of this incredibly oppressive technology that the world’s richest man Jeff Bezos and his corporation Amazon are rolling out.

The police and intel agencies are going to justify using this facial recognition on everyone by saying that they are going to use it to track down criminals, terrorists and undocumented immigrants, but at the end of the day, that is just going to be their justification to get it rubber stamped by Congress or the Supreme Court, and it’ll be used against all Americans.

Just like how the Patriot Act was only supposed to be used to fight terrorism and now they tap everyone’s phones as a result of it.

Once this kind of technology is unleashed upon the public one time in America, repressive and authoritarian governments around the world will adopt and in a rather short span of time, humans will have lost a lot of freedom as a result of it.

People are going to be scared simply to attend political protests as a result of this Orwellian technology.

The technology giant Amazon is providing police agencies and private intelligence contractors in the United States with facial recognition and video tracking algorithms to conduct mass surveillance on the population.

Amazon’s artificial intelligence software, named Rekognition, transforms CCTV, police body camera and other government video sources into an omnipresent eye, constantly collecting data and analyzing it in real-time using databases of tens of millions of images of the population. It provides police agencies with the power to track the movements and activities of targeted individuals and identify individuals in public places such as at demonstrations.

The program was brought to public attention by a report published by the American Civil Liberties Union (ACLU) on Tuesday. It was accompanied by an open letter from the ACLU and other civil liberties groups to Amazon’s CEO and the world’s richest man, Jeff Bezos, calling on Amazon to cease providing the service to government agencies.

Amazon Web Solutions (AWS) unveiled Rekognition in November 2016, marketing it as a useful tool for government agencies to “inspect photos for objects or people of interest or concern.” One year later, Amazon announced the addition of a video monitoring feature, which “detects persons” captured on video, “even when the camera is in motion and, for each person, returns a bounding box” around their face, identifying “face attributes.”

The AWS website states: “For security and public safety applications, this helps identify persons of interest against a collection of millions of faces in real-time, enabling timely and accurate crime prevention.” The program can also identify “vehicles based on license plate numbers from images taken by street cameras.”

The company also announced a new feature, “Crowd-Mode Face Detection,” which can identify 100 individual faces in a single image. It states that the program can “capture demographics” and “analyze sentiments” based on facial analysis of “group photos, crowded events and public places.” The blog post includes an accompanying image of hundreds of people whose faces have been automatically detected. 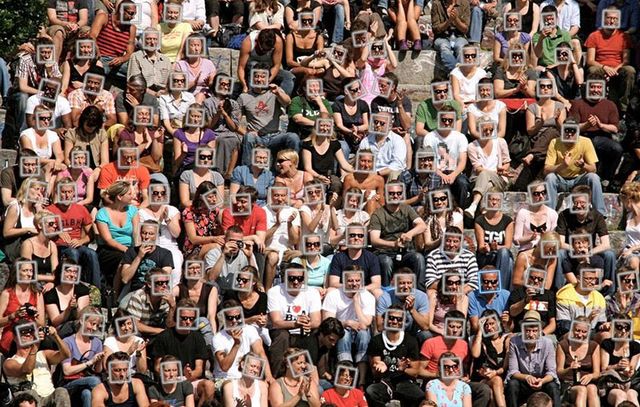 Both the Washington County Sheriff’s Office in Oregon, and the city of Orlando, Florida, are publicly listed as current Rekognition customers on the Amazon Web Solutions (AWS) website.

The operations in Orlando were described at a recent developer conference in Seoul, South Korea by the director of Rekognition, Ranju Das. “City of Orlando is a launch partner of ours,” Das said. “They have cameras all over the city. The authorized cameras are then streaming the data…. We analyze the video in real time [and] search against the collection of faces they have.”

Emails obtained by the ACLU under a freedom of information request submitted in January show that Washington County sheriffs introduced the software by February, 2017, within three months of its unveiling, and immediately combined it with a database of 300,000 police photos. The county also created a mobile app for its deputies to submit images for verification while on duty.

Another email obtained by the ACLU, dated July 10, 2017, shows a request from the Oregon Terrorism Information Threat Assessment Network (TITAN) Fusion Center to process images through the sheriff office’s Rekognition software. Fusion centers are under the control of the federal Department of Homeland Security and coordinate the sharing of information on “counter-terrorism” between the FBI and state, local government and private contractors.

The publicly-listed users of the Rekognition software also include ARMED Data Fusion Systems, a private intelligence contractor dedicated to “the development and integration of cutting-edge technology to combat acts of political violence, terrorism, organized criminal activities, and insider threats.” The contractor’s website lists a number of services, including responding to “mass public demonstrations and civil unrest,” and identifying “radicalized individuals who pose an imminent threat.”

During a speech to a four-day AWS re:Invent conference in November 2016, the chief data scientist for Motorola Solutions, Dan Law, promoted the company’s new software developed in conjunction with Amazon’s Rekognition. A video demonstration of the software shows police body-cam footage being live-streamed and processed to identify every person in the officer’s line of sight in real time. When a “missing” suspect is identified, it immediately calls all nearby officers to the scene.