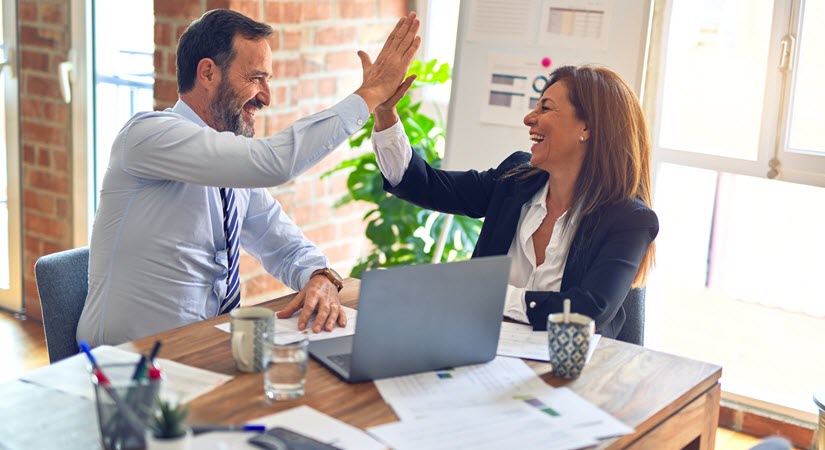 One of the reasons it’s a good idea to form a solid retirement plan is the uncertainty in the markets. But not just the stock markets…

We’ve witnessed absurd calculations about the returns pensions must generate to meet their funding objectives. Like when they use an absurdly-ambitious 7% (or higher) return on investment, for example. We say “absurdly ambitious” because the latest research indicates the next 10 years of stock market returns will be about 8% below Treasury bond returns, which themselves are already offering an after-inflation negative yield.

Pensions have all-too-often ended up well short of the mark, leaving their plans grossly underfunded. Retirees who rely on those pensions to provide a comfortable retirement can be left short-changed without much warning.

Another good example of uncertainty in the markets happens when a pandemic virus strikes. The resulting panic can trigger market meltdown, like the coronavirus did in March of last year.

And the catalyst doesn’t have to be nearly as big as a pandemic. Just one Fed announcement could trigger a crash, especially when Chairman Powell or President Biden even hints at the possibility of tapering asset purchases.

So why all the concern about being cautious, potential triggers, and absurd predictions?

It’s simple: Most people believe their own retirement plans will do much better than history indicates.

Garrison Keillor’s imaginary Midwestern town is a place where:

All the women are strong, all the men are good-looking, and all the children are above average.

Unfortunately, most retirement savers seem to think they’re from Lake Wobegon, too…

Here’s an example from the Natixis 2021 Global Survey of Individual Investors. When asked how much their retirement savings would return after inflation, American investors selected the truly shocking figure of 17.5%. By comparison, financial professionals estimated a significantly more realistic 6.7%.

The difference between individuals’ sky-high hopes and the more reality-based (but still optimistic) projections from financial pros is called “the expectation gap.” And that expectation gap is more than enough to devour your dreams of financial security.

Even worse than this expectation gap? People’s expectations keep rising, year after year: 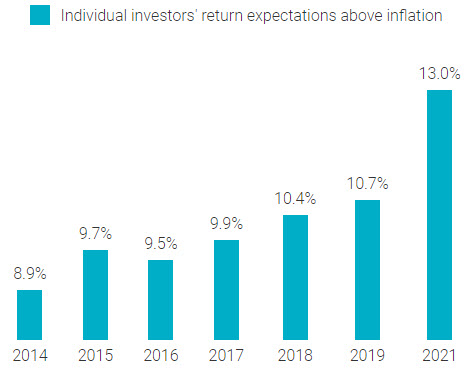 Again, these are after inflation returns. Considering November’s year-over-year inflation rate came in at 6.8%, everyday Americans are somehow expecting an astonishing 19.8% return on investment in 2021.

Based on history rather than hopes, and data rather than dreams, that’s simply unlikely. As Dimensional Fund Advisors remind us:

Going all the way back to 1926, the annualized inflation-adjusted return on stocks was 7.3%.

See also  Bars and gyms bustling as Americans learn to live with covid...

The bad news here? There’s simply no feasible way to meet those goals of earning twice the historical average return on stocks without taking extreme risks.

And when you’re saving for retirement, risk is usually something you want less of.

What if you’ve avoided this level of deluded overconfidence, and are confident your retirement is on track? We hope you’re right, but you might be mistaken…

Your “on track” retirement may be on the wrong track

As CNBC’s Mike Winters warns us, many Americans who think their retirement is “on track” are wrong:

“Most Americans feel like they’re saving up plenty to retire comfortably, but for many people, it’s probably not enough, according to recent data.”

After glancing through the data the CNBC piece mentioned, there were some particularly interesting findings like:

In an accompanying survey by the TransAmerica Center for Retirement Studies, the median amount saved for retirement wasn’t that much: $93,000.

Maybe that sounds like a lot? (It sounded like a king’s ransom back in college…) In fact, “$93,000 is terrific for a 31-year-old, not impressive for a 41-year-old, worrisome for a 51-year-old and woefully inadequate for a 61-year-old” said Peter T. Palion, a certified financial planner.

He’s right. The size of your nest egg is a function of how long you’ve been building your nest. If you’re just starting out, that’s great. If you’re less than 20 years from retirement, though, it’s bad news.

Worse news, even worse than the expectation gap, is that we’re seeing an awful lot of forecasts for future returns that look nothing like the past… 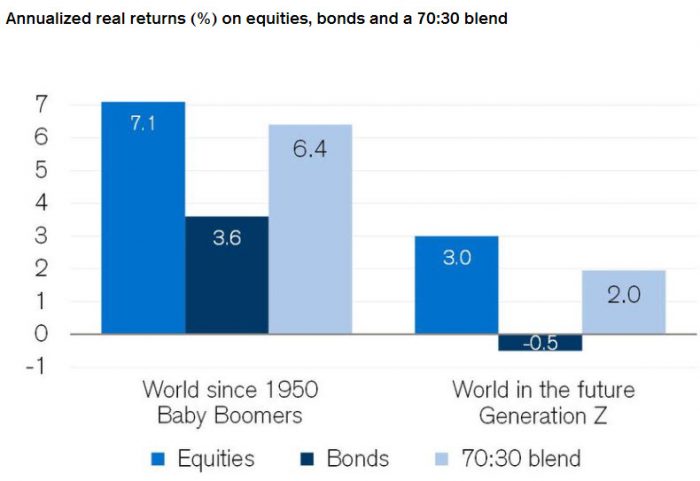 And believe it or not, that’s one of the more optimistic forecasts. Based on the cyclically-adjusted price to earnings ratio (CAPE), we can expect 10-year stock market returns to be between zero and -5% annually. Hussman Strategic Advisors extrapolate a more pessimistic -8% return.

See also  67% of Americans support bill to ban stock trading by members of Congress, even as Pelosi resists

For some, that’s not terrible news. As Dr. William Bernstein said:

A twenty-five-year-old who is actively saving for retirement should get down on his knees and pray for a decades-long, brutal bear market so that he can accumulate stocks cheaply.

What about those of us for whom the age of 25 is a fond and fading memory? What should we do? How much confidence should we have in our projections?

The TransAmerica Center’s survey we mentioned earlier revealed an unusual level of confidence about retiring with a comfortable lifestyle. A total of 73% of survey respondents claimed to be at least “somewhat confident” they would be able to retire comfortably. In addition, the survey revealed that of all respondents, almost two-thirds (or 64%) said “their retirement confidence has stayed the same in light of the pandemic.”

So with all of this in mind, the natural question to ask yourself is:

If another black swan were to appear in the near future, and the market tanks (again), or pensions and Social Security go up in smoke… would you still be confident?

There won’t be an obvious alarm that goes off when the market collapses. You aren’t likely to receive a text message on your phone that says your savings are in danger. (Anyway, based on the projections we’ve seen, the danger could be well on its way already.)

So it’s a good idea to exercise caution. You can start by taking a few minutes and reviewing your savings to make sure your risk exposure is in line with your goals. Ask yourself, is your retirement is on a stable foundation in case things do go south?

That review could mean a round of diversifying and reallocating your savings as you see fit. Physical precious metals are one asset class not available in most retirement plans, and that’s a shame. Gold and silver both have a reliable track record of holding their value relative to inflation, and can help provide a safe haven during financial catastrophes.

But whatever you choose to do, it’s better to exercise caution than to be overconfident in your situation. Remember, Lake Wobegon is imaginary. Your retirement shouldn’t be.