I am not a big fan of ideologies; actually, I don’t have an ideology as I view ideologies as completely irrelevant in 2021. Ideology means nothing to me, it’s just another mind-fuck to keep you blind to the truth and make you believe in utopias.

However, what happens in America in 2021 is strangely familiar to what happened in the Weimar Republic circa 1930.

What do I mean by that? Well, everything goes nowadays: child trannies, sex change operations, homosexuality running rampant and being promoted non-stop on mass media and by politicians. Basically, America is becoming a gay disco, and, even worse than that, it tries to export degeneracy everywhere.

This is exactly what happened in Berlin, Germany, in the thirties. The usual suspects are the same, then and now. What’s more interesting about America 2021 is that, unlike Germany, where fascism (the National Socialist party basically) appeared as an organic reaction to bolshevism and degeneracy, America is embracing fascism alongside with everything that national socialists abhorred.

I.e. America is becoming a fascist state, as big corporations are now becoming the Federal Government’s enforcers when it comes to censorship (you can’t own a bank account, a YouTube/Facebook/whatever social media account if you’re found guilty of wrong think, or lose your job if you’re not politically correct etc.), or mass vaccinations (you can’t fly a plane if you don’t have a vaccine passport for example, and it’s a private company doing it), and, in the same time, the Federal Government promotes all types of degeneracy one can think of, both home and abroad.

Fascism in America is basically (deep) state power working through so-called woke corporations to enforce various totalitarian measures. Allow me to demonstrate by offering you the latest example:

100 top business leaders met to discuss halting donations to politicians who back ‘restrictive’ voting laws, including in Georgia

We can no longer allow our Republic to be ruled by Oligarchs:

Instead…demand election integrity — and coalesce our movement to promote the agenda of American workers and Small Business! t.co/agZff1gwO0

According to this article from Business Insider, the biggest corporations in Amerika are working together with the Federal Government to punish “rogue” states trying to enforce common sense measures such as voter ID laws.

100 CEOs threatened to withhold campaign contributions and punish states by pulling investments in factories, stadiums and other projects and endorsements.

This is what happens when we have two parties that serve one master.

That master is NOT the Constitution or the American people. All politicians are bought and paid for by lobbyists, and they are not working for you.

The scary thing is that these corporations are not worried that, we, regular citizens who are also their customers, can boycott them, because they can get much more from the political elite and not even notice a boycott.

The political and the corporate elites have joined forces to enrich themselves and push the middle class into serfdom.

They own the media, the printing press (Federal Reserve), the administration at all levels, the legislative power and they can do whatever they want.

In the near future you will lose your job, career, family, money, face blacklisting, if you fail to comply to what the elite wants you to do.

Corporations are now doing what the Federal Government cannot actively do YET, i.e. to enforce policies they cannot yet enact by law, i.e. they are doing by proxy through corporate pressure on the public.

Expect this to get much worse.

The Federal Government cannot yet segregate/punish those who do not comply with mask/vaccine mandates or “wrong think” but you WILL feel it soon.

It’s 100 corporations now, but in a couple more months it will be 1000 corporations.  Then it will be small businesses pressured to act or be cut off from bank accounts, card services, google search results, surges in negative reviews, supply cutoff, etc.

Trust me, they are just getting started and you will soon see it affect your life.  Think coupons for good behavior, discounts for compliance, and store credits for reporting on someone.

The only thing they’ve left to solve is take people’s arms and their tyrannical rule will be complete!

Hopefully, it will come just in time for the collapse of the dollar, which these Modern Monetary Theory (MMT) people running the Biden Administration are going to cause as soon as people realize that these stocks are not actually worth trillions.

Here’s an infographic (you can figure out the problems with this yourself if you’ve got an average IQ or higher): 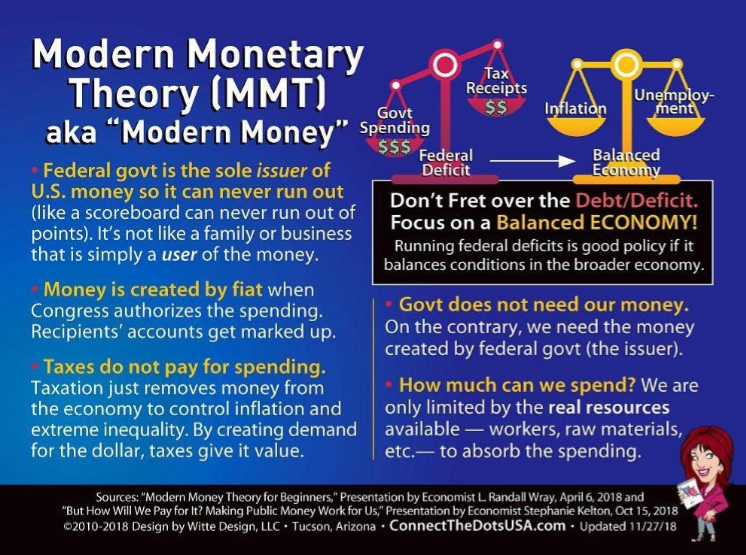 Biden is supposedly pushing some aggressive tax plan to try to balance this, but that is absurd. No one even knows how much money they’ve printed since this coronavirus thing started, but it’s enough to create a death spiral, as problems start popping up and their only solution is to print their way out of it.

At some point, a new digital currency will be introduced, and it will be linked to an app on your phone, and you’ll get some number of digital credits per month as a “UBI.” Probably, getting it will be tied to having been vaxxed, not being a racist, and so on. Though they might not attach those strings when it first rolls out – who knows.

What we do know is this: this is not a very long timeline. People will say things like “5 or 10 years out,” and I don’t think that is realistic. I think this is all happening now.