The United States of America is embarking on what could be the most consequential period in Its 242-year history. From its humble beginnings as a backwater colony of the British Empire, it became the most powerful nation in human history, an empire of its own. But the benefits of world conquest are eventually offset by economic decline, social decay and war.

This is a story as old as civilization. In the past 500+ years, Portugal, Spain, the Netherlands, France and Britain have all tasted world domination. Before that, it was the Ottomans, Mongols, Chinese, Greeks, Romans and many others. Inevitably, they were all displaced by emerging powers. 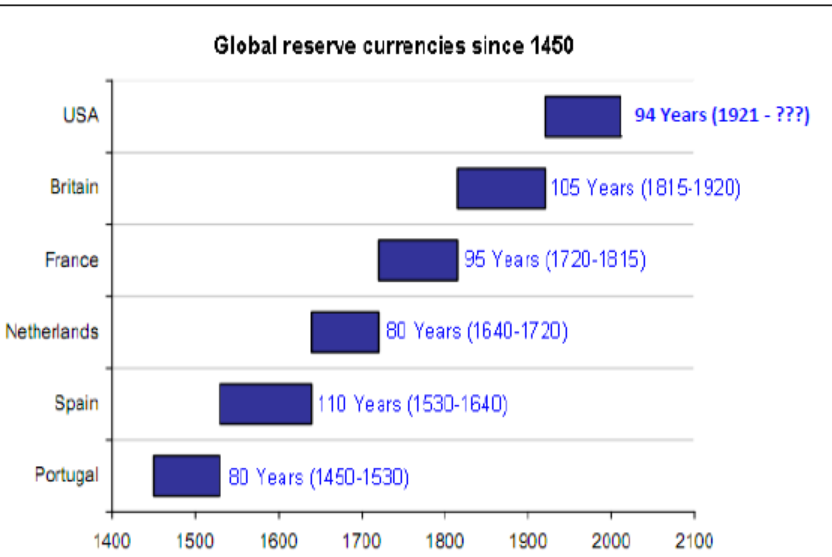 The end of a nations reign as world hegemony is usually rough, to say the least. Luckily for the five other nations on the chart above, they all survived the ending process. But think about the Ancient Romans or the Ottomans. The end of empires is dramatic. It is usually filled with chaos and war. Like I said above, the benefits of empire are offset by the costs of the ending.

So, what should the US do? If it keeps expanding militarily, it could prolong its imperial power. It could gain access to more resources and trade routes to keep its currency strong. But this choice presents a big downside as well. Russia and (especially) China are emerging powers, and the US is beginning to butt heads with those nations. With the military technology of all three nations, direct conflict could have cataclysmic results.

On the other hand, the US could choose to rein in their power. They could stop their military conquest, and even choose to bring military resources home. This would have a lot of downside as well. If the US voluntarily diminishes its power, the ability to print money at will ends. That means the US no longer has the cash to fund its extravagancies. Meaning, the government won’t be able to uphold its welfare state. The people will get angrier than they already are. Internal conflict could break out, and the US would be more vulnerable to outside forces (e.g. Russia and China).

And that is America’s predicament. Continue to push forward and risk war with emerging superpowers or pull back and risk economic viability and national sovereignty. Whatever happens, the US is likely to go through chaotic times. We could collapse like Rome or fade into the background like Britain. But I am an optimist in this case. I think we will prevail. I don’t think we need to be an empire to be great. We should get back to the basics that our founders intended: liberty, peace and prosperity.