From Bloomberg:
America’s working class is falling further behind.
The rich-poor gap — the difference in annual income between households in the top 20% and those in the bottom 20% — ballooned by $29,200 to $189,600 between 2010 and 2015, based on Bloomberg calculations using U.S. Census Bureau data. 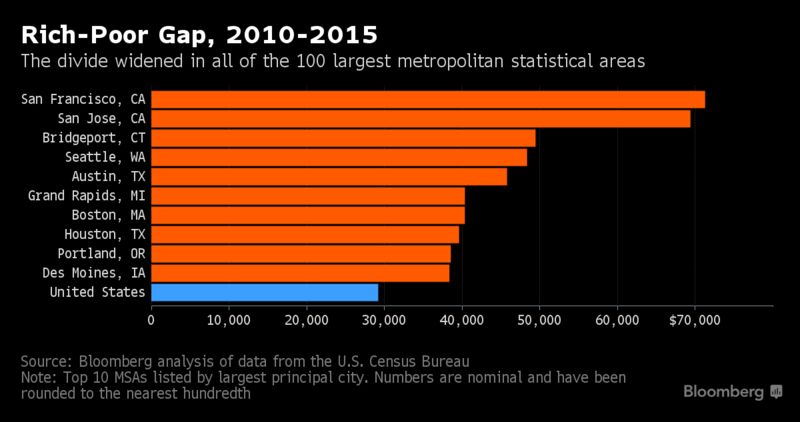 Computers and robots are taking over many types of tasks, shoving aside some workers while boosting the productivity of specialized employees, contributing to the gap.
“Technological developments have increasingly replaced low- and mid-skilled jobs while complementing higher-skilled jobs,” said Chad Sparber, an associate professor and chair of the economic department at Colgate University.
This shift is predicted to continue. About 38% of U.S. jobs could be at high risk of automation by the early 2030s, according to a study by PricewaterhouseCoopers LLP. The “most-exposed” industries include retail and wholesale trade, transportation and storage, and manufacturing, with less-educated workers facing the biggest challenges.
Companies’ use of temporary and part-time employees to cut costs also may be widening the disparity, with wage growth failing to keep up with rising residential and basic-necessity expenses. As the divide grows, hardships increase for the bottom 20%. Affordable housing, for example, is in short supply nationwide, forcing workers to find shelter further from their jobs and endure lengthier and costlier commutes. Rental costs rose nationally by 3.9% in March from a year earlier, according to the Labor Department.
High-tech hubs were among the five metropolitan statistical areas where the gap between the highest- and lowest-income households expanded the most: two in California, San Francisco and San Jose, as well as Austin and Seattle.
The fifth is Fairfield County in southwestern Connecticut. The majority of full-time, year-round employees in the high-income communities there, including Old Greenwich and Darien, work in sectors such as finance, insurance and scientific and technical services. Almost half the employees in lower-income cities, including Bridgeport, have jobs in retail, manufacturing, construction, administration and waste services. 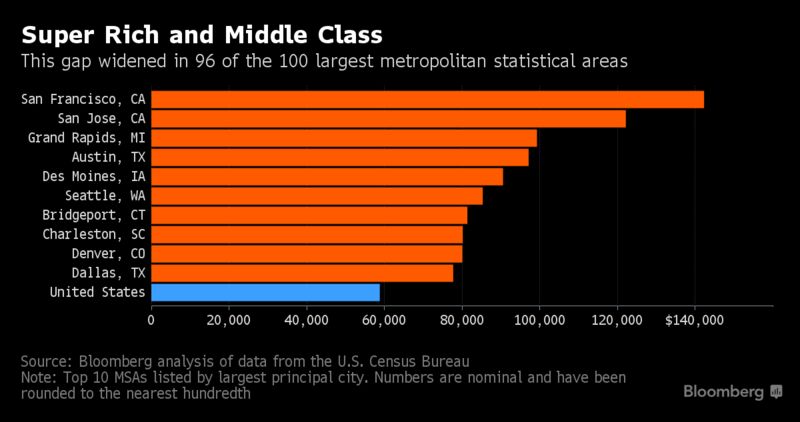 Bloomberg also calculated the change in the gap between the super rich (the top 5%) and the middle class (the middle 20%). It grew by $58,800, with Grand Rapids and Des Moines among the metro areas with the biggest changes.
Western Michigan has benefited from investment in industries including information technology, specialized manufacturing and life sciences, according to The Right Place, a private, nonprofit economic development organization. The Iowa metro area is a finance hub, with an insurance sector that’s expanded more than 11% in the past 15 years, the Iowa Economic Development Authority said. 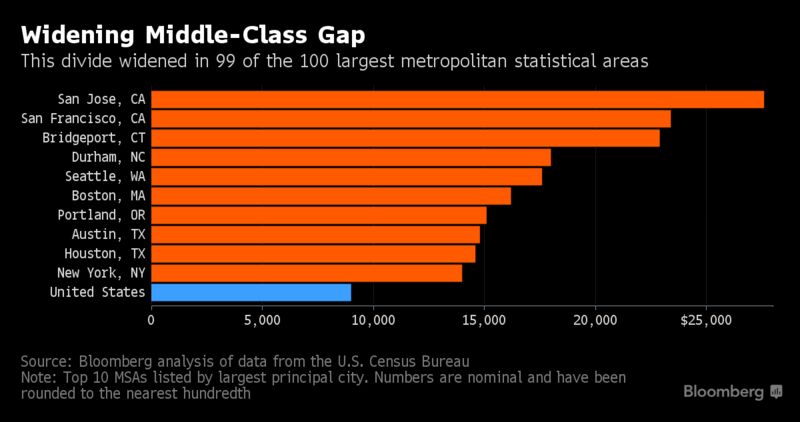 The gap even widened within the middle class, with the span between lower and upper household incomes at the 30th and 80th percentiles growing by $9,000.
“Companies are doubling down on costs cuts and streamlining their operations,” said Chris Rupkey, chief financial economist at MUFG Union Bank in New York. Workers “at the bottom have not seen as much improvement as those at the very top of society.”

See also  Some People are Still Under the Impression That Federal Courts in America are Serious
See also  Has A State Of Collective Insanity Descended Upon America?
Trending: Views: 1