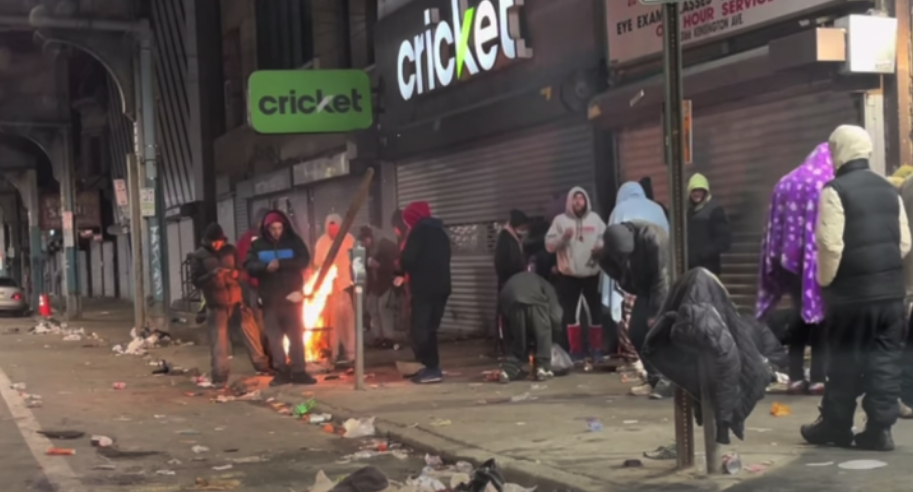 The big drug cartels absolutely love fentanyl for a couple of reasons.

First of all, it is extremely inexpensive to make, and it is very easy to move it long distances.

Secondly, it is exceedingly addictive, and so customers constantly come back for more.

But the only problem is that many of those customers don’t last too long.  Tens of thousands of Americans are dropping dead from fentanyl overdoses, and this has become a major national crisis.

Once again tonight, vast hordes of addicts will congregate in urban areas where they know they will be able to score some fentanyl.  One of those areas is Kensington Avenue in northeast Philadelphia…

The video looks like a scene from an apocalyptic movie – dozens of disheveled people shivering in the middle of a winter night as they camp out around a trash bin on fire among a street strewn with litter.

But the footage isn’t a Hollywood production but a candid snapshot of Kensington Avenue in northeast Philadelphia – an area that has been likened to the infamous Skid Row section of Los Angeles.

The neighborhood has previously been dubbed the ‘East Coast’s largest open-air drug market’ by DEA officials, according to the New York Times.

You can see footage of Kensington Avenue at night right here.  If you didn’t know better, you would probably be tempted to think that it was pulled right out of a post-apocalyptic horror film.

On Kensington Avenue, addicts can purchase a bag of fentanyl-laced heroin for as little as five dollars…

The Kensington section of Philadelphia, where anyone can buy a lethal dose of fentanyl-laced heroin for $5 a bag, has been known locally as the ‘ground zero’ of America’s opioid epidemic, Philadelphia Magazine reported.

It is not uncommon for locals who pass by the area to notice men lying motionless on the sidewalk.

Syringes and needles are also frequently seen out and used in plain sight.

Sometimes the men that are lying motionless on the sidewalk never get up, and that is because they have dropped dead from an overdose.

Of course scenes like this play out on a nightly basis all over America.  At this point, synthetic opioids such as fentanyl have become the leading cause of overdose deaths in the United States…

In 2016, synthetic opioids, primarily illegal fentanyl, passed prescription opioids as the most common drugs involved in overdose deaths in the United States, according to the National Institute on Drug Abuse.

It is incredibly easy to overdose on fentanyl.  In fact, an amount of fentanyl equivalent to “two grains of salt” is apparently enough to put you in the grave…

Some families are facing a fentanyl crisis and law enforcement is sounding the alarm. The tasteless, odorless drug is driving up the number of fatal overdoses.

People who are battling a substance use disorder are being fooled by fentanyl. Lisa Smittcamp, the District Attorney in Fresno County, California, says the amount it takes to overdose is about the size of two grains of salt.

For a number of years, this was primarily a problem in the eastern half of the nation, but that has all changed.

Fentanyl use is now spreading like wildfire in the western half of the country, and that spike is pushing the overall death toll dramatically higher.  The following comes from NPR…

The spike in fentanyl deaths in the West contributed to a record number of fatal overdoses last year, with roughly 72,000 Americans dead.

“It’s just getting worse, and it’s killing too many people,” said Matthew Donahue, deputy chief of operations for the Drug Enforcement Administration.

Sadly, the final number for 2021 is expected to be even higher.

These are deaths that do not need to happen, but Americans don’t seem to be getting the message that fentanyl use is extremely dangerous.

In fact, since the beginning of the pandemic the number of Americans testing positive for fentanyl use has absolutely skyrocketed…

Use of methamphetamine and fentanyl shot up after the pandemic hit the U.S. in March 2020, with a particularly sharp spike for the latter, according to a new report by drug testing company Millennium Health.

The adjusted positivity rate of urine drug screens was up 78% for fentanyl and 29% for methamphetamine during the first 9 months of the pandemic compared with the same period in 2019, according to the report. While cocaine and heroin saw small increases initially, both fell below pre-pandemic levels by the end of 2020.

This is yet another example of how the fabric of our society is unraveling all around us, and it is only going to get worse.

For years, much of the fentanyl being used in the U.S. was coming in from China, but then international pressure forced the Chinese to ban the sale of fentanyl.

Unfortunately, since that time vendors in China have found ways around that ban…

Under international pressure, China’s government banned the production and sale of fentanyl and many of its variants in May 2019, resulting in a significant reduction in the country’s illicit fentanyl trade.

But more than a year later, Chinese vendors have tapped into online networks to brazenly market fentanyl analogs and the precursor chemicals used to make fentanyl, and ship them directly to customers in the U.S. and Europe as well as to Mexican cartels, according to an NPR investigation and research from the Center for Advanced Defense Studies, or C4ADS, a nonprofit data analysis group.

This is one of the reasons why we need strong security on our southern border.

Right now the Mexican cartels are flooding our streets with fentanyl, and the new administration does not seem too concerned about doing anything to stop this from happening.