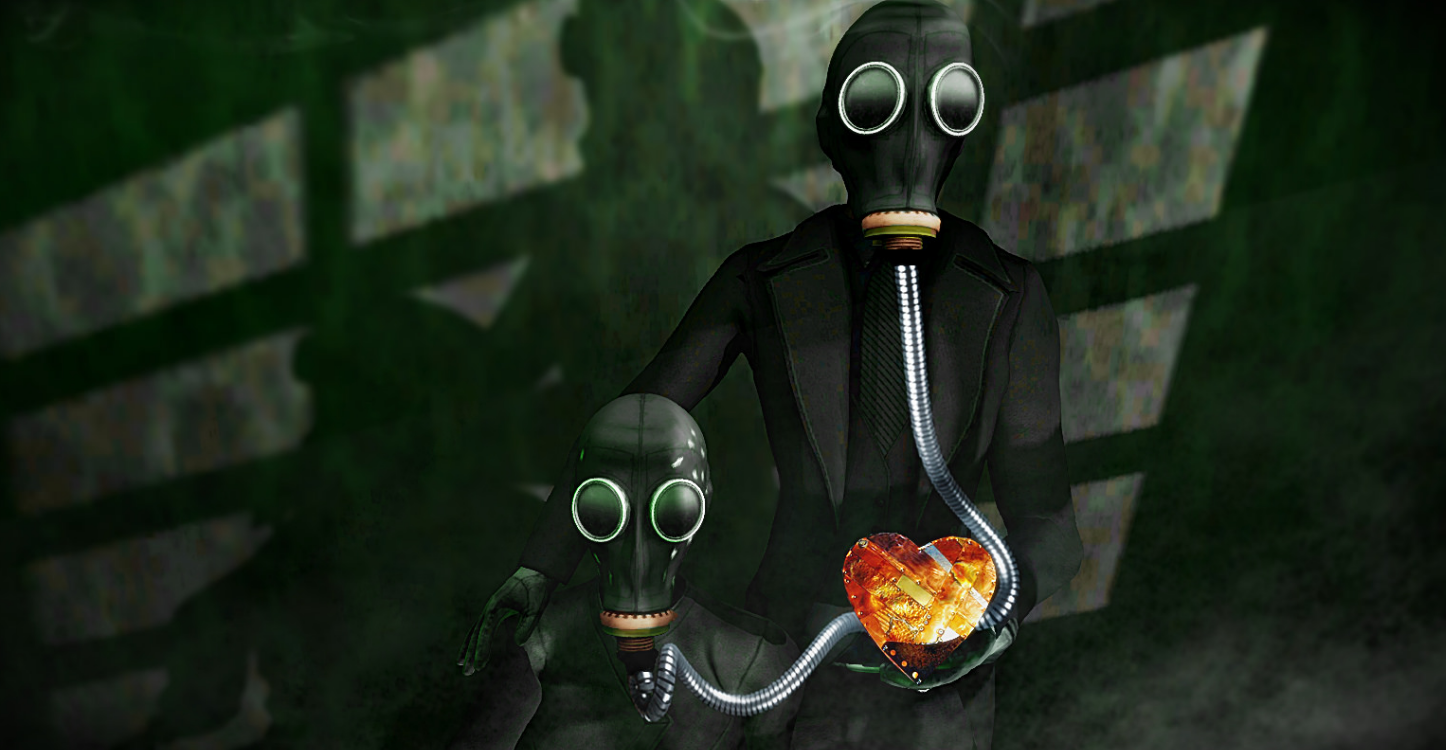 I am a Millennial. I am smackdab in the middle of this generation that now makes up the largest portion of the U.S. workforce. I write this out of love, a desire to inform, and a deep concern for where we are and where we are going.

The over-analyzed, overly entitled, and increasingly struggling generation of Americans born roughly between 1981 and 1997 have been berated by a never ending stream of articles about them in recent years. They are the most ethnically and racially diverse in America’s melting pot so far, behind only the generation to follow it. Millennials just passed Gen X-ers as the largest portion of the U.S. workforce as there are now 56 million either working or looking for work as of last year, according to the Pew Research Center.

They are upending retail, real estate, and the workplace. But here’s the thing. They don’t own much of anything, many do not save any money at all, and they are not having babies.

Millennials are not buying cars. They would rather bike or Uber around town instead. This strikes fear in the auto industry and puts a smile on the faces of climate change alarmists. These young Americans are saddled with debt from ridiculously expensive and laughably ineffective colleges that fail to adequately prepare them for the working world. The American middle class across all generations are now working longer and harder, being taxed more, and therefore have less to spend. So why buy a car?

Despite being the largest percentage of the workforce today, Millennials are not all that motivated to work. This generation has seen some of the lowest labor force participation rates and highest unemployment over the last couple of decades. Many Millennials entered the workforce in or around the 2008 recession and have since been saddled with a trifecta of economic baggage: tepid wage growth, high home prices, and excessive student debt.

The graph below details Millennials’ labor force participation rate growth since 2000, broken down into five-year age segments. Data (as of February 2018) from Advisor Perspectives. Teens are running away from work as fast as they can and those in their 20s and 30s are continuing to opt out of the labor force altogether. 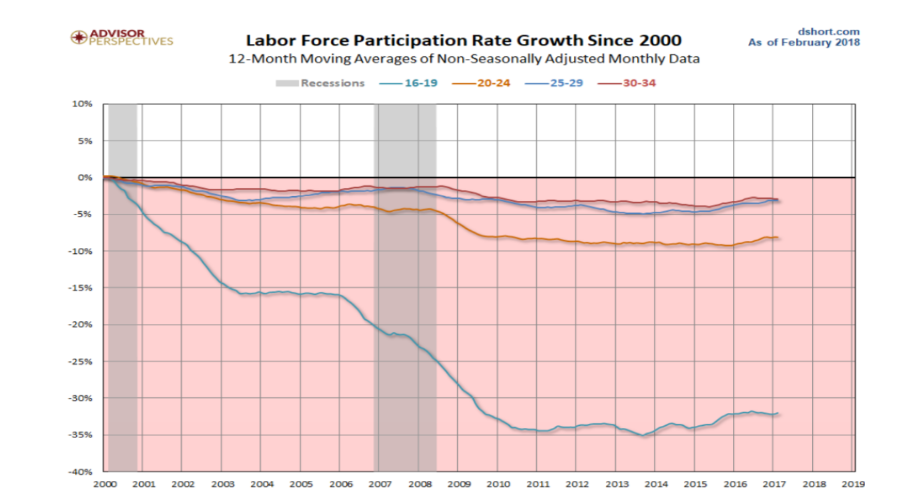 Even though an increasing number of Millennials are not working or looking for work at all, many still suffer from a severe case of FOMO (fear of missing out).

Credit Karma/Qualtrics studied 1,045 American Millennials and found that almost 40 percent of them spend money they don’t have, going into debt to keep up with their peers. When a friend suggests doing something they really can’t afford, 27 percent feel uncomfortable saying “no,” despite being strapped for cash. 39 percent of these Millennials have gone into debt to keep up with their friends and three-fourths of them have kept this fact a secret.

FOMO is very real in this social media age and is quite crippling for those that aren’t making six figures at a tech company or financial firm after graduating. Most are stuck with tens of thousands of dollars in student loan debt. Credit Karma’s Millennial members in the U.S. have an average of $46,713 in debt.

Millennials are facing a multitude of issues in an economy that was vastly different from when most of them started going to high school or college. There are many challenges, but in turn, an abundance of opportunities for America’s young workers, according to Generation Opportunity’s 2016 State of the Millennial Report.

One finding from the report lays out the lack of economic opportunity as many in this generation can be quite picky about where they work or what they do. As a result, unemployment for 18-29 year olds was about 8 percent in 2016, about double the 3.7 percent for those over 29. Today, the average unemployment rate since 2000 is 12.8 percent, more than double the combined average of 4.8 percent for other age groups. But these numbers do not tell the full story. As stated previously, many Millennials have given up looking for a job entirely after being frustrated with the country’s employment offerings so are therefore not even included in this unemployment statistic.

Another revelation is the devastating combination of exorbitant higher education costs and embarrassingly low wages Millennials are experiencing. As tuition rises far faster than inflation, millions of young Americans enter the workforce with heaps of debt to pay off and no good-paying job able to sustain their spending habits and mounting debt load. In a crushing blow to the American Dream, Millennials suffer from “lower levels of wealth and personal income than their two immediate predecessor generations,” making our generation the first American generation to be worse off than the previous one.

If this wasn’t bad enough, for my fiscal hawks out there, the U.S. national debt has surpassed $21 trillion and the Trump administration is poised to reach $1 trillion annual deficits as soon as next year. Millennials will be stuck with the bill that Baby Boomers have continued to rack up year after year. Politicians continue to spend far more than the country takes in and no one seems to care that the bill will eventually come due. What’s more disgusting is the fact that we are paying into a Social Security system that is set to go bankrupt by 2034 if no substantial changes are made. 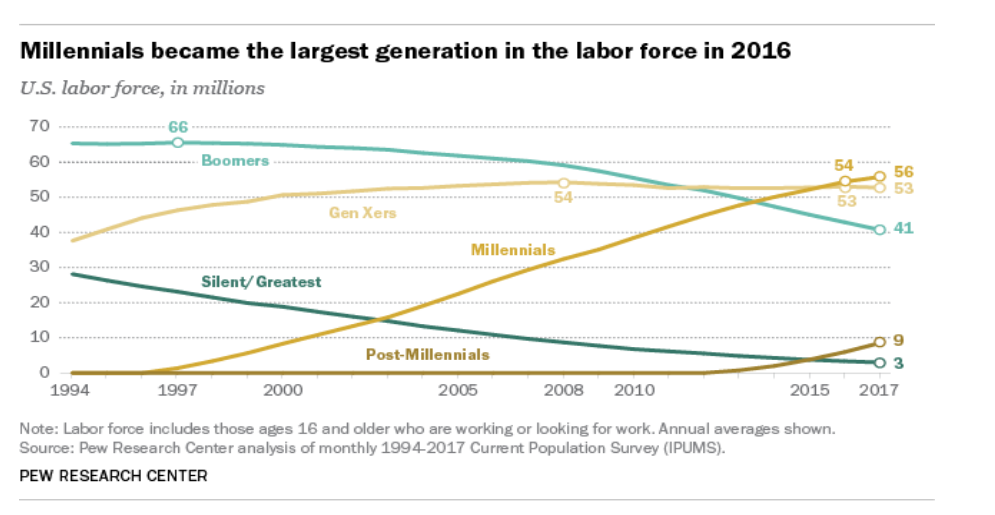 Millennials were buying homes for a minute, now they’re not. According to the U.S. Census Bureau, homeownership was ticking up from its record low point two years ago, but has now stalled. Millennials were driving the uptick in America’s homeownership rate, enjoying the biggest gains last year, but in the first three months of 2018 have pared back. Millennial homeownership is down from 36 percent at the end of last year to 35.3 percent today.

Home prices are still out of reach for many Millennials looking for that starter home. With housing inventory remaining suppressed, the supply of homes for sale has dropped to record lows. We just can’t get in on the housing market despite many of us wanting to own a house to call a home. “Millennials make up the largest share of those seeking starter homes, a portion of the market that saw inventory plummet 14.2 percent and prices leap nearly 10 percent year-over-year in Q1 2017,” according to Cheryl Young, senior economist at Trulia.

What is the remedy to this bleak economic situation?

I’ve tried briefly to make it full-time as a freelancer. It’s no easy task. The flexibility is great but the lack of a steady paycheck and unpredictability of income are near impossibilities. Unless you sign significant long-term contracts with a few big clients, you’ll find that the up and down nature of your freelancing paycheck is not enough to rely on. It’s necessary to start with a sizable amount of money in savings in order to cover those times when you are barely scraping by.

Are Millennials finally starting to save money?

But there’s a catch! A 2017 GoBankingRates survey found that most “young millennials,” between 18 and 24 years old, had less than $1,000 in savings. Even more alarming, almost half had nothing saved at all. Not a penny.

Why is it harder for Millennials to build up their net worth? What is holding them back?

READ  The Fed is Trapped

Susan Tompor, a Detroit Free Press Personal Finance Columnist reveals an eye-opening stat: young graduates with student debt find themselves facing a negative net wealth of $1,900 based on research from the Young Invincibles. Owing more than they own, this same age group had a median net wealth of $9,000 in 2013. “Overall, the median net worth — the difference between one’s assets and liabilities — rose 16% to $97,300 for all families in the survey group … For younger families under age 35, median net worth rose 4% to $11,100 in 2016,” Tompor further illuminated.

Unsurprisingly, a third of Millennials are currently living with their parents.

Who do Millennials blame for their desolate situation?

A majority blame Baby Boomers for destroying their lives, ZeroHedge recently posted, citing a new Axios/Survey Monkey poll, our generation is getting quite angry and despondent, resorting to casting blame.

The survey revealed that 51 percent of Millennials (18 to 34 years-old) blame Baby Boomers (51 to 69 years-old) for making “a raft of poor decisions since the 1980s, that have contributed to a weak political and economic environment.” Interestingly enough, 30 percent of boomers agreed that its generation’s policies really had made things worse, however, 32 percent also said they made it “better.”

As we enter the late stage in this precarious recovery, a widening gap is growing between Millennials and Boomers in the workplace with both sizable generations competing for a small pool of jobs.

Millennials would rather travel the world than own a house. Would rather Uber than own a car. And most upending, they would rather rack up debt keeping up with their friends’ lifestyles than start a family and have children.

America is in a “baby bust,” driven by millennials who are having kids at record low rates, so says a recent Washington Examiner article that refers to a new report warning that America is no longer making enough babies to keep pace with deaths.

Moms need to have 2.1 births to keep pace with deaths. This number was hit in 2010, but since then has fallen down to 1.8, according to a report from the Negative Population Growth Inc. The report went on to say that “The fertility rate decline is driven entirely by millennial mothers in their teens and twenties. Birth rates for all age groups of women under 30 fell to record lows in 2016.”

If we don’t have babies. We won’t have a country. We will become even more reliant on immigration and our country will continue to change as white Americans are slated to become a minority within the next decade. 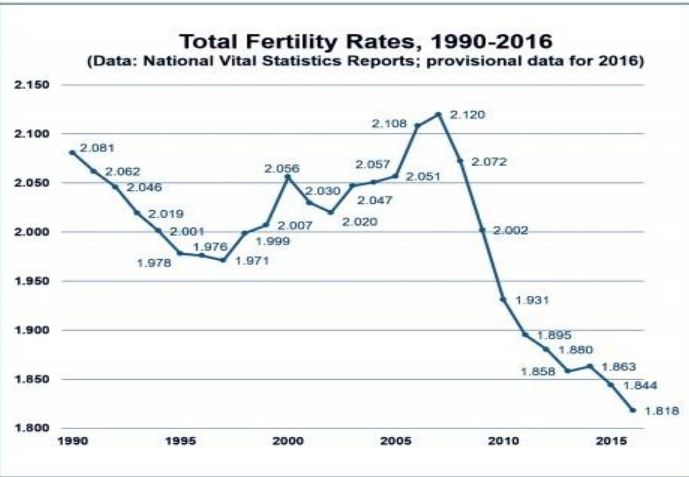 Millennials need to snap out of it. We need to save our money. Work hard. Work long. Have babies. Strive to own a home. Make fiscally responsible decisions and hold our politicians accountable who are bankrupting our country.

We have no other choice.

Bob is a freelance journalist and researcher. He remains forever skeptical of the mainstream media narrative and dedicated to uncovering the truth. Bob writes about politics (in DC and CA), economics, cultural trends, public policy, media, history, real estate, Trump Derangement Syndrome, and geopolitics. Bob grew up in Northern California, went to college in Southern California and lived 4+ years in Seattle. He now lives in sunny Sacramento. His writing also appears in Citizen Truth and has been posted on ZeroHedge.