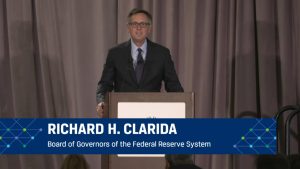 As I reported in November, Federal Reserve members are fleeing the central bank. Federal Reserve Vice Chairman Richard Clarida announced that he is resigning this Friday before his term ends in the midst of scandal. Similar to other Fed members who resigned in 2021, Clarida has come under harsh scrutiny for what many deem insider trading. With only two weeks left of his term, it comes as some surprise that Clarida chose to leave his position immediately.

What is of most interest is that Clarida will now be absent at the policy meeting set for late January when officials will decide when to raise interest rates and minimize the $8 trillion balance sheet. Having an active voice in that conversation is of less concern than escaping scrutiny. Following in the footsteps of Robert Kaplan and Eric Rosengren who resigned over alleged pandemic-related insider trader, Clarida is fleeing at the first sign of scandal despite denying wrongdoing.

“Rich’s contributions to our monetary policy deliberations, and his leadership of the Fed’s first-ever public review of our monetary policy framework, will leave a lasting impact in the field of central banking,” Fed Chairman Powell, who decided to stay at the Fed amid his own scandal, said in a statement. “I will miss his wise counsel and vital insights.” President Biden has already nominated Lael Brainard to take his place, which comes as no surprise as many suspected Brainard would replace Powell had he not been renominated.

See also  Biden Has a Secret List Of Americans & Editorial Board Demands Use Of Military Force Against Them!

When allegations of insider trading among Fed members came to light, Powell stated that he would have an ethics committee investigate board members. Perhaps the board members know that any potential investigation could end in legal disaster and abruptly stepping down is the safest preventative measure.