If the board refuse to sell to Musk at a price well above market value, could he sue the board of twitter as a shareholder for failing in its fiduciary responsibility to shareholder primacy (en.m.wikipedia.org/wiki/Shareholder_primacy)?

I don’t know much about corporate law, but Dodge vs. Ford, 1919 (en.m.wikipedia.org/wiki/Dodge_v._Ford_Motor_Co.) shows that such a case wouldn’t be without precedent in the US.

There have been cases which found both for and against shareholder primacy in the century since.

Nevertheless, as this essay points out (corpgov.law.harvard.edu/2017/04/11/a-legal-theory-of-shareholder-primacy/), the status of shareholder primacy in American law is very real although complicated and ambiguous.

The cause and effect of shareholder primacy rests on a legal foundation, and not some general notion of collective social belief that perhaps can change with enough persuasion or argumentation.

See also  Twitter says it overcounted its users over the past 3 years by as much as 1.9M

The board therefore has to surely come up with a strictly financial case for why they’re rejecting his bid, which it seems pretty clear they don’t have.

The question I have therefore is – if the Twitter board refuse to sell and Musk sues, would it go to SCOTUS?

If it does, surely the conservative majority works in Musk’s favor?

Say what you will about the Elon Musk Twitter buyout saga. The mask is being ripped off in real time revealing what Twitter truly is and how important it is to entrenched power in the Judeo-Corporate Territories of Weimerica. 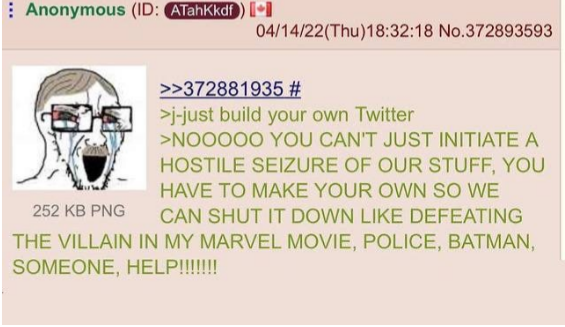