…………..
But monetary and fiscal interventions since 2008 have had massive consequences and created intense market distortions. They created the financial asset bubbles (that are now deflating) and have distorted the efficient allocation of capital by financial markets. By inflating the value of financial assets they made the rich richer, and the poor relatively poorer. The result has been widening income inequality. We’ve always known that at some stage the distortions of monetary policy would need to be addressed and purged – but… is this really the time to try?

Conventional economists – the ones in positions of power in Central Banks and editing national newspapers – are prescribing a course of economic purgatives to address inflation though conventional higher rates. Such conventional policy will drive a wave of business failures, a bankruptcy quake, a redundancy shock, and financial retrenchment. It will be described by politicians as tough medicine, but we will be told it will mitigate inflation and unravel the systemic instabilities that have multiplied in the system as a result of post 2009 experimental monetary policy. It will be look profoundly unfair as the poorest in society will suffer most.

It will all be a bit: “To save the global economy, we had to destroy it..”

See also  Luke Rudkowski: This is the 79 year old politician in charge of the baby formula crisis!

US productivity registered the biggest drop since…1947! 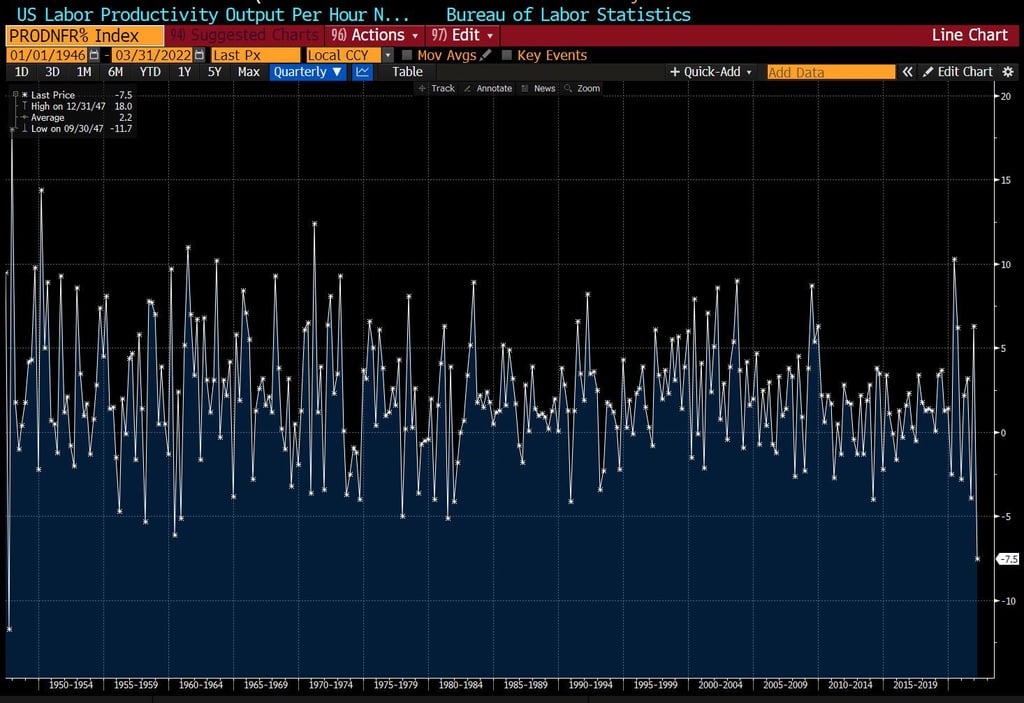 Soaring inflation pushing the price up for everyday items like gas and groceries in the United States is leading consumers with low credit scores to borrow more and default on their loans more often, a study by credit agency TransUnion found on Wednesday.

Credit card balances and delinquency rates among non-prime borrowers–people with credit scores below 660–increased by the greatest percentage since early 2021, when inflation began to rise significantly. If high inflation persists, the study projected delinquencies could rise to about 8.4% of total credit card loans by the first quarter 2023, up from 8% in the first quarter this year.

The findings show that despite most consumers being in good financial standing thanks to robust government stimulus and wage growth, consumers with the least financial cushion are increasingly vulnerable to price shocks caused by inflation.

“Despite everything that has happened in the last two years, the consumer is in extremely good shape, but not all of them,” said Charlie Wise, head of global research and consulting at TransUnion. “Averages gloss over the fact that some are struggling.”