Where Apartment Rents Fell & Where They Surged: March Update

In San Francisco, the most expensive major rental market in the US, the median asking rent in March for one-bedroom apartments jumped 8.8% from last year to $3,700. This is a new record, beating by $30 the old record set back in October 2015. Median asking rent means half the apartments are advertised at higher rents, half are advertised at lower rents. After that peak in October 2015 came a long trough. By February 2017, one-bedroom rents were down 11% from October 2015. So in March 2019, the trough has been filled.

This sort of peculiar noise of rents bumping into sky-high ceilings can be heard in other parts of the Bay Area.

In Oakland, sought-after by San Francisco’s housing refugees, the median asking rent for a 1-BR apartment edged down over the past few months. And in March, at $2,270 was 6% below its peak in April 2016.

In Southern California, where rents had been soaring over the past few years, a similar scenario emerges, including the sounds of rents bumping into sky-high ceilings.

The data is based on asking rents in multifamily apartment buildings. “Asking rent” is the amount the landlord advertises in the listing. Single-family houses for rent are not included. Rooms, efficiency apartments, and apartments with three bedrooms or more are also not included. Zumper collects this data from over 1 million active listings of apartments-for-rent in the 100 largest markets. This includes third-party listings received from Multiple Listings Service (MLS). Zumper releases this data monthly in its National Rent Report.

Also not included are incentives, such as “one month free” or “two months free,” which effectively slash the rent for the first year by 8% or 17%. The data includes asking rents from new construction, which other rent reports may not include.

The table below shows the 16 most expensive major rental markets. The shaded area indicates peak rents and the changes since then: 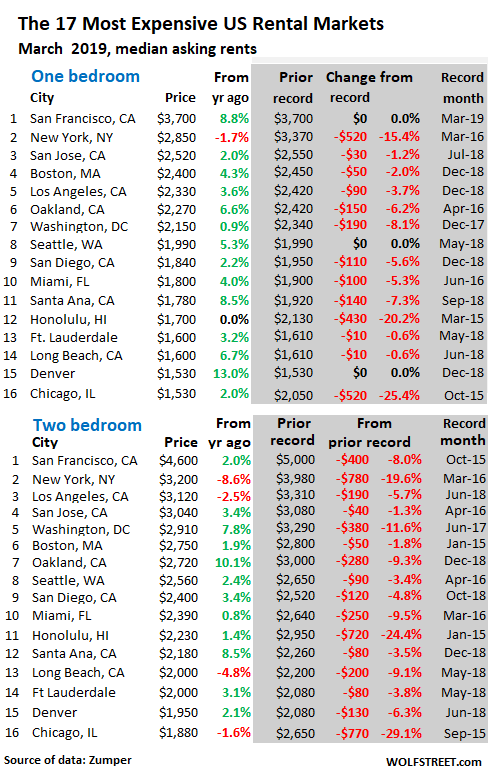 In Washington D.C., rents are also marked by sharp declines with 1-BR and 2-BR asking rents down 8% and nearly 12% from their respective peaks in December 2017 and June 2017.

Clearly, in the most expensive rental markets in the US, rents – particularly those of the more expensive 2-BR apartments – are bumping into ceilings and are bouncing off these ceiling.

Post-hurricane rent-gouge falls apart: In Houston, rents surged after Hurricane Harvey had laid waste to some of the housing stock. By March 2018, the median asking rent for a 1-BR had shot up 12% year-over-year to $1,290 and for a 2-BR by 14% to 1,630. This catapulted Houston into 25th place in the list of the 100 most expensive rental markets.

Below is Zumper’s list of the top 100 most expensive major rental markets, in order of 1-BR asking rents. The percentages are price movements in March compared to March last year. Use the browser’s search function to find a city (if your smartphone clips the right side of the table, hold your device in landscape position):

See also  The UK bond market does not believe the Bank of England
Trending: Views: 0