We’re almost two years away from the next presidential election, but Democrats have already begun to jostle for the position of Trump’s number one adversary. Gabbard, Harris, Gillibrand, Warren and Castro have already announced their candidacy for president. O’Rourke, Biden, Sanders, Booker and others are anticipated to announce their candidacy soon. When it’s all said and done, this will truly be a massive field of candidates.

This large number of presidential candidates highlights the weakness of the Democratic party. It shows their inability to put their efforts behind a cohesive set of ideas.

This wide-variety of candidates/ideologies to choose from may fragment leftist voters similarly to how it did in 2016. Except this time, it may be even worse. Remember, the Democratic party was fairly limited in the number of candidates they had in 2016, even though the ideological differences between Sanders and Clinton were stark. These differences, and the less than ethical treatment of Sanders by the DNC, led to such fragmentation that 1 in 10 Sanders supporters ended up siding with Trump over Hillary.

Now, with all these different candidates carrying the metaphorical flags of very different ideologies, how will the Democratic party manage to unite their base? Is the threat of Trump alone enough? Obviously, it wasn’t for many Bernie supporters in 2016. Many Gabbard supporters will be just as diehard. And look at O’Rourke’s new cult-like following. Think about all the mainstream Democrats that won’t settle for anything less than the comfortable and familiar Biden.

The division within the Democratic party is nothing new. In fact, it has been trending this way since the 1980’s. As you can see from the chart below, the two parties had quite a bit of overlap in 1980, but both sides have pulled away from each other in ideological terms. The right has managed to stay much more ideologically cohesive. However, the left is broadly spread across the ideological spectrum. Just think about the new Democrats like Alexandria Ocasio-Cortez compared to the old Democrats like Biden and Clinton. One side is socialist, and the other side is mainstream corporatist. 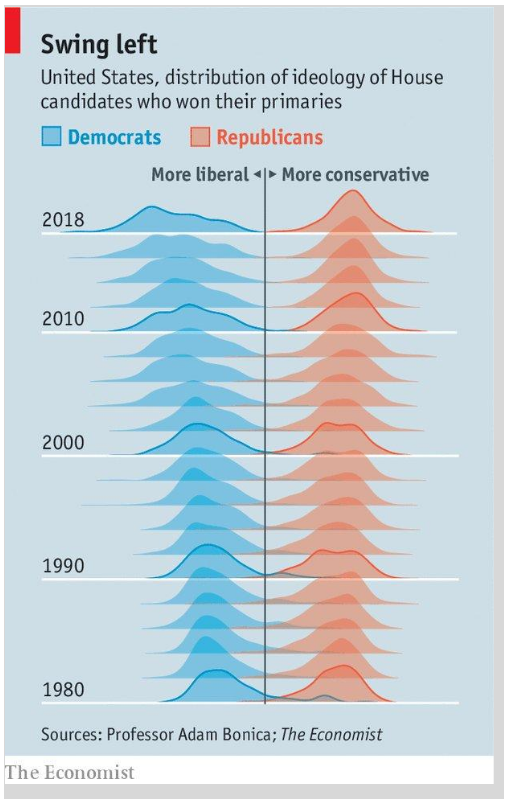 If you are an enemy of the left, there is not many weak points greater than this one. In these conditions, division can easily be fomented. As you can see from the hilarious Twitter troll Comfortably Smug, it doesn’t take much to cause chaos among Democratic voters.

However, this doesn’t mean Trump has the election locked up. As I’ve said many times in the past, the left has incredible power over the narrative. If the establishment has any serious dirt on Trump, they will drop it at the most opportune time to derail his campaign. Whatever happens, 2020 is setting up to be one of the most interesting years in US history for politics.