I get that it’s time for the holidays and we’re all playing our video games and watching our tv and f*cking about on social media, but all that stuff is a f*cking opiate for the masses. It has made us lazy and complacent.

This Covid “relief” bill is a f*cking JOKE. I won’t even go into what bullshit was pushed into it as it’s being covered everywhere else, but NO ONE in congress has the strength or balls to do what’s right here. Where are the real leaders? And are we as citizens really all so neutered that we can only protest when it’s being pushed by a mainstream news source?

Regardless of how you felt about the George Floyd protests, we HAD power and momentum there to demand real meaningful changes that would have helped not just minorities, but all Americans. A rising tide lifts all boats! We should have pushed for an end to the failed War on Drugs, should have demanded average citizens’ voices be able to be heard again by getting money out of politics, should have fought for anti-trust legislation to break up the mega-corporations’ foothold on our daily lives. But those protests fizzled out without much real change and people hopped back on Twitter and Reddit once the corporate overlords decided it was time to dial it down because it was becoming dangerous to their existence and stopped pushing it. Compare that to say, France, whose citizens riot over something f*cked up every other month. I commend them.

We need to unite as both left and right, Republican and Democrat and in between, in order to make changes necessary that would benefit ALL AMERICANS. A general strike, a massive protest, SOMETHING to demonstrate to our government that the time for greed and corruption at the expense of the citizenry is over. No more attaching completely irrelevant laws or billions in foreign aid onto a bill that is meant for something else just to get important legislation passed. No more being held hostage because both parties don’t want to work together due to political grandstanding, while congressmen and women still get paid in full with vacation time and priority health benefits, as the rest of us slide further into poverty and despair.

Congress needs to WAKE UP and start working together again to pass actual meaningful legislation, or failing that, must experience the same pain the average citizen does when they fail. They shouldn’t get one f*cking dime or be allowed to recess until they work out a REAL DEAL in times like these.

We all need to stop playing their games and flip the script. We don’t need the support of mainstream media to stand up and protest. Most importantly, we must be able to put aside our differences and find common ground again as a country so we can talk issues out rationally and find compromises to get our country back on track. We cannot allow the media to continue to divide us and use us. A grassroots movement of united citizens on demanding real change is necessary now more than ever, and those who got experience this year organizing protests (we’ve had many on both sides of the political spectrum) should be laying out what we need to do now.

TLDR: stop waiting for a corporation to direct your actions and stand up for what is right on your own terms. covid “relief” is a joke and we need real knowledgeable leaders to start organizing grassroots protests or a general strike to end legislative incompetence and greed, and to push for actual meaningful changes that would benefit every American, not just a few. 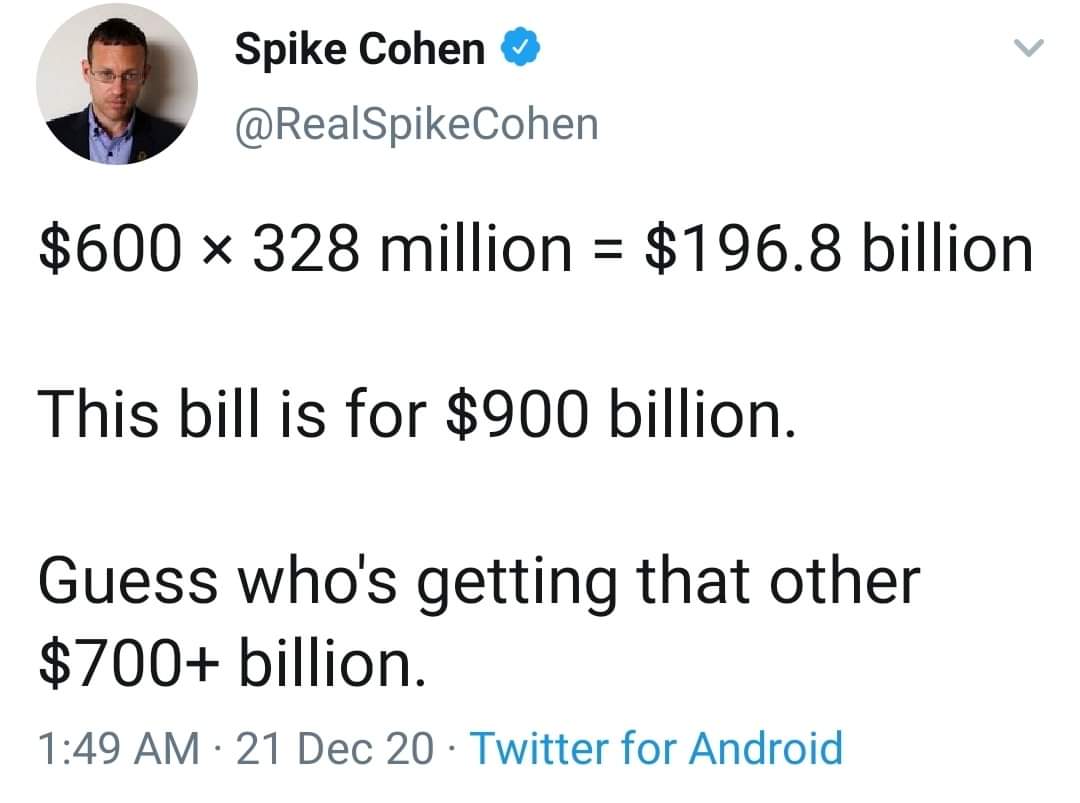 The gov't closes the economy. You lose your job. You face eviction.