The value of declaring the entire nation in or out of recession is limited.

Recessions are typically only visible to statisticians long after the fact, but they are often visible in real time on the ground: business volume drops, people stop buying houses and vehicles, restaurants that were jammed are suddenly sepulchral and so on.

There are well-known canaries in the coal mine in terms of indicators. These include building permits, architectural bookings, air travel, and auto and home sales.

Home sales are already dropping in most areas, and vehicle sales are softening. Airlines and tourism may continue on for awhile as people have already booked their travel, but the slowdown in other spending can be remarkably abrupt.

As a result, there can be areas where the Great Recession of 2008-09 never really ended, and other areas that have experienced unprecedented building booms (for example, the San Francisco Bay Area where I live part-time.)

Changes in sentiment are reflected in different sectors of the economy: people become hesitant about big purchases first (autos, houses) and then start deciding to save more by spending less (Christmas shopping, eating out, vacations, etc.)

Given the structural asymmetries of our economy (a few winners, most people lucky to be losing ground slowly), each economic class also responds differently. The lower 60% of households don’t have the disposable income of the top 10%, so “cutting back” for them might be buying fewer fast-food meals per week.

The top 10% have the majority of the nation’s disposable income, just as they own two-thirds of the wealth. If the sources of their income tanks (tech bubble pops, etc.), then signs of recession in this class will be a decline in high-cost consumption: luxury store sales, fancy restaurants, etc.

In other words, different classes, sectors and regions of the economy can be recession while others are still doing fine.

s a result, the value of declaring the entire nation in or out of recession is limited. While national conditions such as mortgage rates and Treasury yields are consequential, the recessionary effects will likely be as asymmetric as the economy: the effects will vary considerably depending on how each sector, class and region are doing.

To summarize: the top 10% may never experience a recession that guts the bottom 90%, who depend on wages rather than earnings from capital. As this chart illustrates, wages (employee compensation) has been in structural decline. 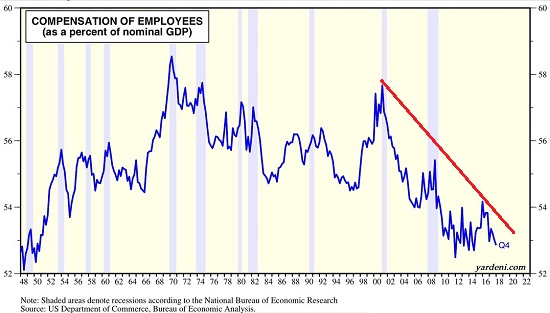 My new book Pathfinding our Destiny is available at a discount for the ebook and the print edition through December 15 ($5.95 ebook, $10.95 print). Read the first section for free in PDF format.