Market “fixes” fuel wealth/income inequality which feeds political and social instability.
There are two Grand Narratives about the U.S. economy and asset markets: the mainstream narrative is that nothing is fundamentally wrong with the economy, and so no structural changes (and the sacrifices such changes entail) are needed.
In this narrative, the only problem that needs solving is markets stop bubbling higher. The mainstream always expects markets to keep bubbling higher essentially forever, but reality intrudes and the asset bubbles pop.
The solution in this narrative is to “fix” markets with massive stimulus: fiscal stimulus from the Savior State and monetary stimulus from the central bank — Federal Reserve (reinflating bubbles that enrich the already-wealthy is our primary job).
I’ve marked up a chart of the S&P 500 stock index to reflect this narrative: 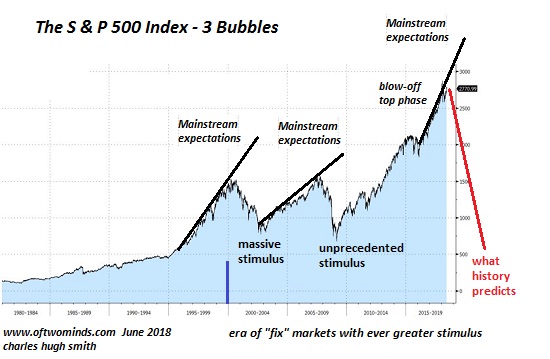 Note that the mainstream never expects bubbles to deflate. The economy is always doing great at the bubble top, and expectations are always that assets will consequently continue bubbling higher.
Then there’s a horrendously unexpected crash. The status quo panics, and the Federal Reserve and the Savior State rush to provide massive stimulus–tax cuts, tax rebates, more federal spending, lower interest rates, bond buying, easier lending standards, increased liquidity, and so on.
Asset prices respond to these constant injections of uppers very predictably:they leap higher as participants realize the “Fed put” is in place: the central bank will not let markets decline, so the profitable strategy is “buy the dip.”
Note that the quantity of stimulus required to “fix” the markets increases exponentially every bubble-pop. Where a sharp decline in interest rates and conventional monetary stimulus stopped the 2002 crash in its tracks and reinflated asset bubbles, the next bubble-pop crash in 2008-09 required an unprecedented range of unconventional stimulus to stop the crash and reinflate the era’s third asset bubble: zero interest rates (never done before), $4 trillion in bond and mortgage purchases (never done before), ending mark-to-market pricing of financial instruments (never done before) and unlimited liquidity to the banking sector and financial markets (never done before).
And so here we are again, at the top of a monumental parabolic blow-off top in stock markets and bubbles in other asset classes such as bonds and real estate.
And once again, the mainstream expects the bubble to keep rising. Doesn’t it strike you as a bit insane to keep inflating unprecedented bubbles after the previous bubbles popped, and expect this new bubble to never pop?
The alternative Grand Narrative is the economy has changed and the problems are systemic: “fixing” the markets (i.e. using markets as signaling devices) doesn’t address what’s structurally broken; it simply increases the eventual pain when “fixes” fail the next time.
I hate to break this to you, but parabolic blow-off top bubbles burst, with catastrophic consequences for everyone who believed bubbles never pop and everyone who placed their capital in the hands of Wall Street and the conventional financial sector.
We are entering troubled times. The opportunity to address what was broken 10 years ago has been squandered by the status quo’s reinflation of an even larger bubble as the “fix” to the bursting of the last bubble.
The question for individual investors is: are you prepared to invest in troubled times? Put another way: are you ready to entrust your wealth to Wall Street via passive investments in stock indices and funds that are betting that Netflix, which just doubled in a few months, will double again from $400 to $800 and then double again from $800 to $1,600 because the global demand for lousy movies is limitless and there’s no real competition for streaming lousy movies?
Investing in troubled times boils down to one thing: control of your capital.Give the control of your capital to others, and you’ll get what deflating bubbles deliver. Take control of your capital, and other possibilities emerge.
I wrote a book about taking control of one’s capital, An Unconventional Guide to Investing in Troubled Times, and since we’re entering troubled times, I’ve put the book on sale this month: $2.99 for the Kindle (digital) edition, and $9.95 for the print edition (a 50% discount).
Read the intro and chapter One for free here.
And let’s not forget the consequence of “fixing” markets rather than addressing fundamental imbalances: Market “fixes” fuel wealth/income inequality which feeds political and social instability.

SUMMER BOOK SALE through JUne 30, 2018:
22% discount on Inequality and the Collapse of Privilege and Why Our Status Quo Failed and Is Beyond Reform
See also  The tax rate for regular Americans is five times that of the wealthiest billionaires
See also  INSTANT KARMA: CNN's Chris Cuomo asks Twitter to name times he's denied facts he doesn't like - and gets mercilessly ripped apart on social media
730 views