Rioting broke out in Paris today as thousands gathered for May Day protests dubbed ‘Armageddon’ by extremist demonstrators. Thugs from the so-called Black Bloc anti-capitalist movement were involved in running battles with police soon after 1pm.

Members of the anti-capitalist agitator group Black Bloc have joined the Yellow Vest protestors on the streets of Paris today, resulting in an unbelievable level of rioting, fighting and violence today as French police struggled to keep the anarchists at bay.

President Macron must be beside himself at this point, wondering just what will it take to restore peace to the Paris streets since the city-wide protests began back in November of 2018. For those of you who have not been following this story closely, the protests began last year as a reaction to France attempting to impose a Climate Change tax on their gasoline purchases for their vehicles.

You can get a lot of Liberals in any country to sign on for so-called Climate Change legislation, but it’s a whole other story when you start reaching into people pockets to pay for it. President Trump was 100% right when he pulled America out of those stupid Climate Change accords, and the rioting on the streets of Paris is an excellent illustration of just how right he was.

French authorities announced tight security measures for May Day demonstrations, with the interior minister saying there was a risk that ‘radical activists’ could join anti-government yellow vest protesters and union workers in the streets of Paris and across the country.

FROM THE DAILY MAIL UK: By 2pm, there had been 165 arrests in Paris, most for public order offences related to the rioting. Weapons were also confiscated as the police used tear gas, rubber bullets and baton charges to try and restore order.

Black Bloc activists with their faces covered could be seen leading attacks on officers, and smashing up vehicles and shop fronts. The worst early violence was outside La Rotonde, President Emmanuel Macron’s favourite restaurant in Montparnasse. 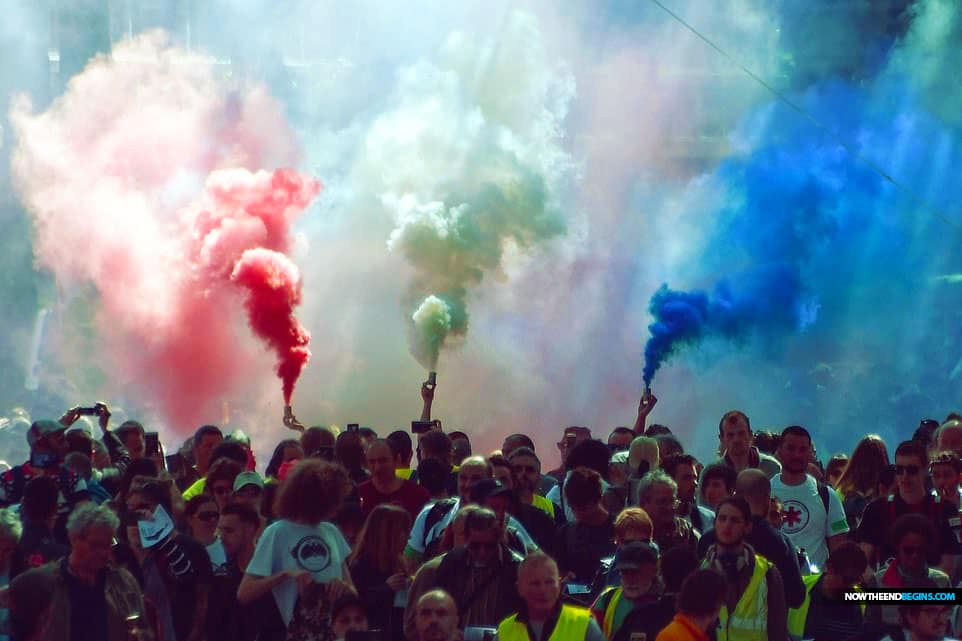 People hold blue, white and red smoke bombs as they demonstrate to mark May Day or Labour Day on May 1, 2019 in Toulouse, southwestern France

‘Black Bloc agitators were throwing stones and other missiles at us, and we had to charge,’ said a CRS riot control officer at the scene. ‘Tear gas has also been deployed to bring order to the situation. The situation is very tense.’

Huge parts of Paris were in lockdown as an unprecedented 7400 police officers were drafted on to the streets. The massive security presence was announced by Interior Minister Christophe Castaner who said: ‘There’s no question of dramatising anything, it is a question of being prepared.’

May Day is a Bank Holiday and a traditional time for Left-Wing workers to rise up against the ruling elite.

In France, there have been around 5000 police, gendarmes and soldiers deployed for recent Yellow Vest demonstrations that have descended into anarchy.

Today a further 2400 were deemed necessary as the Vests were joined by trade unionists, climate change protestors and Black Bloc who had posted messages on social media pleding an ‘Armageddon’ that would turn Paris into the ‘Riot Capital of Europe’.

Mr Castanar said the extra officers were needed because ‘1000 to 2000 extremists’ were expected to join in the trouble. These would be added to around 25,000 Yellow Vests in Paris alone, and some 100,000 more in other parts of France, said Mr Castaner.

MANY ‘RADICAL ACTIVISTS’ MORE ARE EXPECTED TO COME FROM NEIGHBOURING COUNTRIES INCLUDING BRITAIN, GERMANY AND ITALY TO JOIN IN THE MAYHEM. THERE ARE FEARS THAT THEY WILL TARGET PUBLIC MONUMENTS, BANKS AND HIGH-END SHOPS, WHILE ALSO THREATENING THE KIND OF FIRES THAT HAVE BECOME COMMON AT PROTESTS.

This has led to the Champs Elysee – the most famous avenue in France – being closed, along with Paris’s governmental and diplomatic districts. The Ile de la Cite – the island where Notre Dame Cathedral is situated was also in lockdown following the blaze that almost destroyed it last month.

Armoured cars and water cannons were also being deployed next to historic buildings such as the Eiffel Tower and Arc de Triomhe. The Vests – who are named after their high visibility motoring jackets – started as an online group calling for an end to high fuel prices last November.

They have been demonstrating in major cities such as Paris every Saturday since, and are now calling for President Emmanuel Macron to resign. READ MORE

2019 May Day Riots On The Streets Of Paris

French police fired tear gas to push back masked demonstrators in central Paris on Wednesday as thousands of people used an annual May Day rally to protest against President Emmanuel Macron’s policies.