by Pamela Williams
I had just reported recently that Obama had admitted to the American Center for Law and Justice that his State Department under Hillary Clinton had colluded with the Clinton Foundation. Cheryl Mill, Clinton’s lawyer, had asked that a “friend” be given a job at Gitmo as a “favor”…Obama complied. The name of the friend was Brock Johnson – his job: “Special Assistant to the Special Envoy for Guantanamo Closure.” The job description states that he was to help the Special Envoy “in furtherance of President Obama’s order to close the Guantanamo Bay detention facility.”
Who is Brock Johnson: reportedly a former Obama Campaign operative, who while he was Special Assistant to the Special Envoy for Guantanamo Closure “helped shepherd deals with less conventional allies such as Palau.” Brock Johnson later tipped off Cheryl Mills about a “Significant FOIA” request in 2012 that requested information about “the number of email accounts of, or associated with, Secretary Hillary Rodham Clinton, and the extent to which those email accounts are identifiable as those of or associated with Secretary Clinton.” The Inspector General found that the State Department then falsely stated that there were “no records responsive to your request,” when in fact numerous officials knew about Secretary Clinton’s private email address. To be clear, Johnson tipped off Cheryl Mills about the FOIA request that would have first publicly uncovered Secretary Clinton’s email scandal; instead the State Department covered it up for months longer. And Johnson obtained his job as a “favor” to the Clinton Foundation.

So I am sure that Hillary Clinton was quite surprised to hear that Obama had come clean on this to the ACLJ.  I am very happy to report that Obama has also sought to come clean on the “Russian hacking story.”  Since this is a breaking news story as of yesterday, I have not seen anything in MSM yet, but it is definitely a major news headline.

U.S. Intelligence Agencies CIA, NSA and FBI claim that IT-Systems of the Democratic National Committee were “hacked” in an operation related to the Russian government. They assert that emails copied during the “hack” were transferred by Russian government related hackers to Wikileaks which then published them.  President Obama just told them they were wrong! The emails WERE “LEAKED!”

So now I am trying to make sense of this and get it straight, and I pray President Trump is now aware of this breaking news.  I know he has been torn over the “Russian hacking” story, but if President Obama said it is false, then it is false.  I hope the CIA Ex Director John Brennan…no, I cannot say what I would like to say…so I will just say, I hope Brennan hears this directly from Obama.  I think if John Brennan is a man of his word, he will publically apologize to President Trump, as all he has done is to publically mock him.  We will be waiting, John Brennan.

See also  Biden admits that Americans are struggling under his presidency 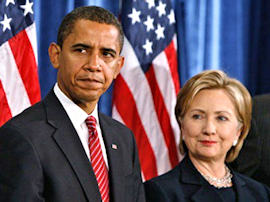 The President of the United States disagrees with those Intelligence Services. He says that the DNC emails were “leaked”, i.e. copied by an insider, and then transferred to Wikileaks. (At the time around the leaking the DNC IT-administrator Seth Rich was found murdered for no apparent reason in the streets of Washington DC. The murder case was never solved.)
Here is President Obama in his final press conference yesterday (vid @8:31):
First of all, I haven’t commented on WikiLeaks, generally. The conclusions of the intelligence community with respect to the Russian hacking were not conclusive as to whether Wikileaks was witting or not in being the conduit through which we heard about the DNC emails that were leaked.
The DNC emails “that were leaked” – not “hacked” or “stolen” but “leaked”.
One wonders if this parting shot is primarily aimed at the involved Intelligence Agencies led by James Clapper and John Brennan. Or is dissing Hillary Clinton and her narrative the main purpose?

4 thoughts on “As OBAMA Leaves The Presidency, He Makes It Clear To WASHINGTON Just What The Truth Really Is. Thank you, President Obama.”