The persistently soaring US debt is now well over $21 trillion. While most media focus on foreign holders of US Treasuries, they make up less than 30 percent of the total. RT breaks down who holds the rest.

Russia recently dropped out of the top-10 holders of US Treasuries, with its holdings falling from $96.1 billion in March to just $14.9 billion in May. According to the latest statistics from the US Treasury, the country disappeared from the list of the 33 largest foreign holders of the US sovereign bonds. 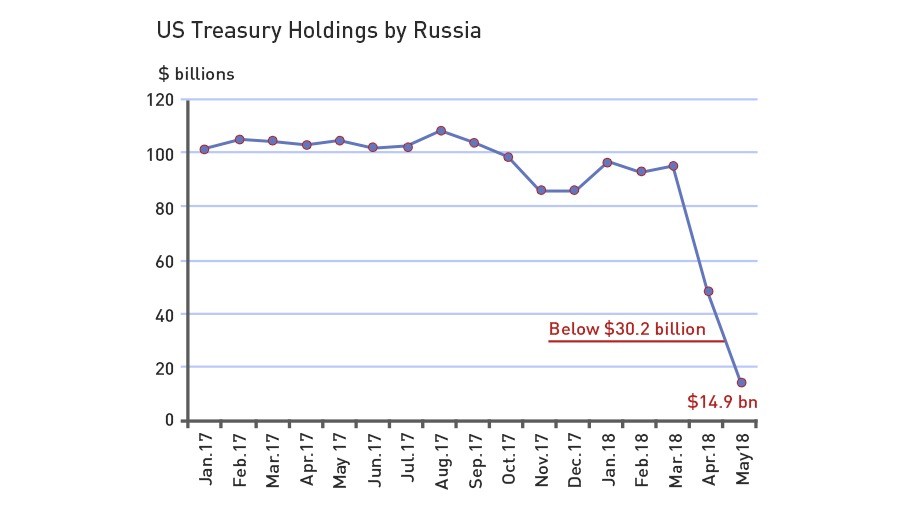 The reduction was due to an assessment of financial, economic, and geopolitical risks, according to the chief of Russia’s Central Bank Elvira Nabiullina. The official said gold purchases were helping Russia to diversify its wealth.

Despite the escalating threat of a trade war, China is still the number one foreign holder of US Treasury bonds. The latest data shows that the country’s holdings grew by $1.2 billion in May to $1.183 trillion, remaining within the same range since last August.

Despite systematic reductions, Japan remains the second largest investor in US securities. In April, Tokyo reduced holdings to $1.031 trillion, the lowest since October 2011, but increased them by $17.6 billion to $1.049 trillion in May. Apart China and Japan, the list of the largest holders of US Treasuries is made up of countries and offshores.

Russia continues to diversify state reserves away from US debt t.co/ryYkA0hLYi

According to latest study by advocacy group Tax Justice Network, only several states from the list are not included in the Financial Secrecy Index, which ranks jurisdictions according to their secrecy and the scale of their offshore financial activities.

Switzerland, Cayman Islands, Hong Kong, Singapore, Luxembourg and Japan were included into the top 15 nations demonstrating financial secrecy. The index, that places the US in second place, also includes the UK, Ireland and China. The minor holders of US Treasuries, such as Germany, the United Arab Emirates and Taiwan were also listed in the ranking.

When it comes to structure, foreign entities keep $6.17 trillion, which is some 29 percent of the entire US sovereign debt. More than 27 percent, or $5.72 trillion, is held by US government entities such as pension funds. About 11 percent, or $2.39 trillion, belongs to the Fed as a result of quantitative easing. The biggest portion of 32.2 percent, or $6.86 trillion, is owned by US institutional and individual investors.

A US Treasury bond is a fixed-interest government debt security with a maturity of more than 10 years. Treasury bonds make interest payments two times a year. The Treasury sell-off that had started last September peaked with the 10-year yield at 3.11 percent on May 17. Since then, the 10-year Treasury has rallied under heavy demand, and the yield has reportedly fallen.

Perhaps countries can now retaliate against the US by selling treasuries amid worsening trade war. This would cause the UST10Y >3% …