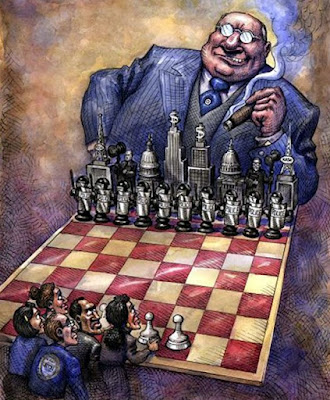 I spent thirty-three years and four months in active military service as a member of this country’s most agile military force, the Marine Corps. I served in all commissioned ranks from Second Lieutenant to Major-General.  And during that period, I spent most of my time being a high class muscle-man for Big Business, for Wall Street and for the Bankers.  In short, I was a racketeer, a gangster for capitalism.”

US Major General Smedley D. Butler, War Is a Racket

“The crash has laid bare many unpleasant truths about the United States. One of the most alarming, says a former chief economist of the International Monetary Fund, is that the finance industry has effectively captured our government—a state of affairs that more typically describes emerging markets, and is at the center of many emerging-market crises. If the IMF’s staff could speak freely about the U.S., it would tell us what it tells all countries in this situation: recovery will fail unless we break the financial oligarchy that is blocking essential reform.”

Most of them became wealthy by being well connected and crooked. And they are creating a society in which they can commit hugely damaging economic crimes with impunity, and in which only children of the wealthy have the opportunity to become successful. That’s what I have a problem with. And I think most people agree with me.”

“The wealth of another region excites their greed; and if it is weak, their lust for power as well.   Nothing from the rising to the setting of the sun is enough for them. Among all others only they are compelled to attack the poor as well as the rich.  Plunder, rape, and slaughter they falsely call empire; and where they make a desert, they call it peace.”