Over the past decade, the European Union has widely been viewed as being ahead of the renewables curve, and it recently-launched new hydrogen strategy has only served to cement its credentials. The EU has a highly ambitious plan to install 40 gigawatts of electrolyzers within its borders and support the development of another 40 gigawatts of green hydrogen in nearby countries by 2030 that can export to the EU. That is a good 320x the current global installed capacity of 250 MW. But one desert country could soon make the EU’s hydrogen plans seem pedestrian: Australia is single-handedly developing a monster 15,000-megawatt project that will generate hydrogen for export, potentially making the world’s driest continent the ‘Saudi Arabia of renewables.’

Dubbed the Asian Renewable Energy Hub, the $20B project is set to become the world’s largest wind-solar hybrid with the vast amounts of renewable energy generated used to produce hydrogen for export.

It is a classic example of the hydrogen economy finally taking off, with some experts predicting that hydrogen could soon become a globally traded energy source, just like oil and gas.

As part of the mega-project, a 5,000-megawatt renewable hydrogen export operation is being developed in Western Australia in the remote town of Kalbarri off the shores of the Indian Ocean about 2,715 miles from Sydney.

However, given the challenges of transporting hydrogen, the first phase of the Kalbarri project at first aims to blend the hydrogen directly with natural gas in order to lower its carbon footprint. Earlier in the year, the UK became one of the first countries to successfully implement grid injection of hydrogen, with the country injecting the gas into its natural gas network to create a 20% hydrogen/natural gas blend–the highest in Europe. A 20% volume blend allows customers to continue using their existing gas appliances and nat gas pipeworks with no need for extra adjustments. According to ITM Power, the company implementing a pilot project at Keele University,  a 20% hydrogen blend rolled out across the entire country could save ~6 million tonnes of CO2 emissions every year, or about the equivalent of taking 2.5 million cars off the roads.

Phase one of the project could be complete in just two years.

The second phase of the Kalbarri project will see the gas compressed and supercooled, just like LNG, and then exported to Asian nations like Korea, Japan, and Singapore. The hydrogen exports could kick off in four years and take another three years to scale.

The third phase of the project actually has the local residents most excited: Using the hydrogen to manufacture green steel for export. Given that steel production accounts for ~7% of global carbon emissions, steel made from renewable energy is expected to become a multi-billion industry as countries move to decarbonize. Kalbarri could be exporting green steel in a decade or less.

However, the hydrogen economy will have to face–and overcome–the same cost conundrum that wind and solar have faced over the past decade.

Over the years, the hydrogen economy has endured many false dawns, mainly due to technical and, mostly, cost issues. This has led to a situation whereby wind and solar energy are now competitive with traditional fossil fuels in electricity generation, whereas hydrogen remains considerably more expensive.

For instance, fueling a hydrogen fuel cell vehicle (FCEV) in California costs around $16.50 per kilogram compared to $3.232 per gallon of regular petrol in the same state. Light-duty FCEVs are typically 2.5x more fuel-efficient than comparable gasoline-powered vehicles, which means that achieving price parity with gasoline would require that 1 kilogram of hydrogen sells for not more than $8.08. In other words, hydrogen costs need to fall by 50% to become competitive with fossil fuels.

Luckily, there is hope on the horizon.

According to a recent report by the Hydrogen Council, “…scaling fuel cell production from 10,000 to 200,000 units can reduce unit costs by as much as 45%, irrespective of any major technological breakthroughs, and can impact multiple end-use cases. Scaling up to 70 GW of electrolysis will lead to electrolyser costs of less than $400 per kW.’’

This already appears to be happening in California: FirstElement Fuel has reported selling hydrogen for $12 per kilogram plus tax for a total $13.11 per kilogram and expects prices to continue coming down as hydrogen production cost falls.

Currently, California has a network of 43 open retail hydrogen refueling stations, capable of dispensing more than 11,800 kilograms of hydrogen each day. That is enough to support nearly 17,000 light-duty FCEVs or more than double California’s fleet of 7,000 FCEVs ( 5,000 FCEVs in 2018). 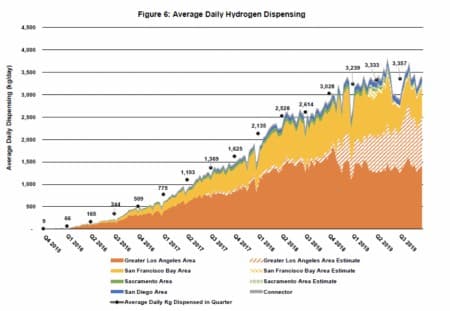 Looking beyond FCEVs, the Hydrogen Council says Fuel Cells for Combined Heat and Power (FC-CHP) are likely to achieve cost parity with both low-carbon (hydrogen boilers and heat pumps with grid electricity) and natural gas (boiler plus grid electricity and natural gas CHP) by around 2030. The organization estimates that the cost of fuel cells and hydrogen tanks could decline by 70% by 2030, driven by larger market volumes of fuel cells and tanks, while the cost of hydrogen supplied could fall by up to 40% by the same timeframe to $4.50/kg and $6/kg.

Hydrogen fuel cell generators may also become viable alternatives to backup generators that use diesel or natural gas in remote locations where batteries and renewables are not viable due to suboptimal conditions. For instance, currently, hydrogen generators could save more than 40% compared to a solar plant and battery in places like Edinburgh.

In a nutshell, it could take the hydrogen economy about a decade before it can fully compete with traditional fuel sources or renewables on a cost basis.