Australia is a full-throttle pedal-to-the-metal dictatorship. The government shut down internet service at ISP level in order to prevent Australians from showing the world what’s going on.

A Melbourne man who was flung headfirst to the ground by a police officer who approached him from behind amid a high-intensity anti-protest operation was “calling for his mum” when he woke up from being unconscious, according to a “distressed” witness.

Shit really is going down in #Australia, and with the media blackout of the Melbourne protests, it's important we highlight the struggle down under.

Australia's the test bed, if she falls, we'll be next.pic.twitter.com/Wko1X8Vb68

Australian police are out of control pic.twitter.com/aK7o8G5LJa

From a friend in Australia just now:
"They have really messed up the internet here today. No pages able to be loaded. They’ve gone to another level of authoritian control" t.co/nVKHWKGwWX

🚨They cut the internet in Victoria Australia🚨 t.co/KNdsSZYp8E

🇦🇺 MELBOURNE POLICE TREAT THEIR CITIZENS LIKE PIECES OF SHIT. THEY SHOULD NOT BE SURPRISED WHEN THE PEOPLE TURN ON THEM. 🤬#COVID19 #melbourne #australia pic.twitter.com/1bVssWqt7m 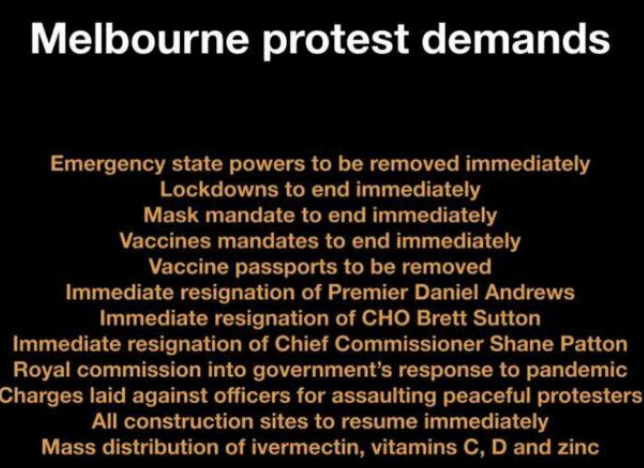