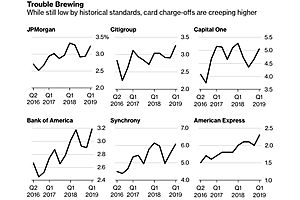 Red flags are flying in the credit-card industry after a key gauge of bad debt jumped to the highest level in almost seven years.

The charge-off rate — the percentage of loans companies have decided they’ll never collect — rose to 3.82 percent in the first three months of 2019, the highest since the second quarter of 2012, according to data compiled by Bloomberg Intelligence. And loans 30 days past due, a harbinger of future write-offs, increased at all seven of the largest U.S. card issuers.

See also  The Evergande credit contagion is spreading, with bonds of China's other leveraged developers tumbling.

Rates for home loans ticked up slightly, a reminder that the easy-money era for mortgages will likely have to end at some point.

See also  The battle for control over the future of money

Those rates don’t include fees associated with obtaining mortgage loans.