Palladium’s premium to platinum jumped to a record, building on its ranking as the best-performing metal of 2018.

Shortages of the metal used in autocatalysts for gasoline-fueled vehicles sent its price to yet another all-time high, widening the price difference with rival platinum to more than $500 an ounce on Tuesday. Most analysts don’t see supply relief for palladium anytime soon. 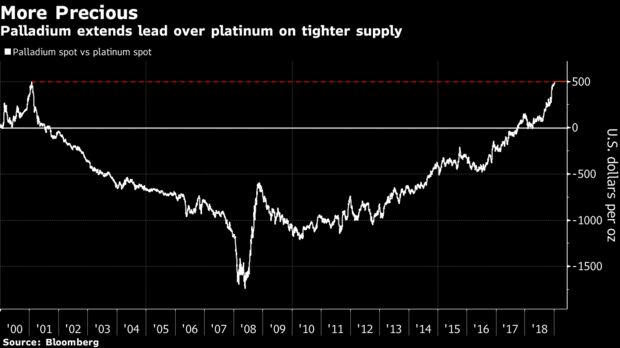 Both metals are used in catalytic converters to reduce vehicle emissions. Platinum, the more expensive of the two for most of this century, has seen usage decline from its key consumers, diesel carmakers. Demand slid as consumers turned away from diesel vehicles in the wake of Volkswagen AG’s emissions-cheating scandal.

The widening price gap has spurred speculation that petrol-carmakers may switch from palladium to cheaper platinum. Anton Berlin, head of analysis and market development at Russia’s Norilsk Nickel PJSC, says this is unlikely. Palladium has some features that make it more suitable for gasoline or hybrid cars, like better resistance to higher temperatures…