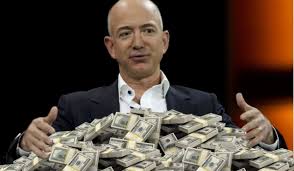 Capitalism’s global conquest continues as entrepreneurs around the globe mint fortunes in everything from cryptocurrencies to telecom to bridal dresses. Forbes has pinned down a record 2,208 billionaires from 72 countries and territories including the first ever from Hungary and Zimbabwe. This elite group is worth $9.1 trillion, up 18% since last year. Their average net worth is a record $4.1 billion. Americans lead the way with a record 585 billionaires, followed by mainland China with 373. Centi-billionaire Jeff Bezos secures the list’s top spot for the first time, becoming the only person to appear in the Forbes ranks with a 12-figure fortune. Bezos’s fortune leapt more than $39 billion, the list’s biggest one-year gain ever.

Amazon could rival the nation’s big banks in as few as five years, capitalizing off its digital prowess and massive consumer base, according to a Bain & Company report.
“We could imagine Amazon’s banking services growing to more than 70 million U.S. consumer relationships over the next five years or so — the same as Wells Fargo, the third-largest bank in the US.,” wrote Bain’s Gerard du Toit and Aaron Cheris. “Although many retail bankers and observers have pegged the nimble fintech start-ups as the likely disrupters, it has become clear that established technology firms pose a bigger threat.”
Pushing customers toward a co-branded banking account also allows Amazon to cut down on transaction costs, Bain said.

Amazon could – according to Bain calculations – avoid more than $250,000,000 in credit card interchange fees every year if finds a bank willing to partner on checking accounts.

There are plenty of stories of artificial intelligence gone wrong.

But recent reports from owners of Amazon Alexa devices are being called ‘bone chillingly creepy.’

READ  Half of the pandemic’s unemployment benefits money ($400 billion) may have been stolen
READ  RECORD REVERSE REPOS EXPLAINED- WHO IS THE FED LENDING MONEY TO?
753 views