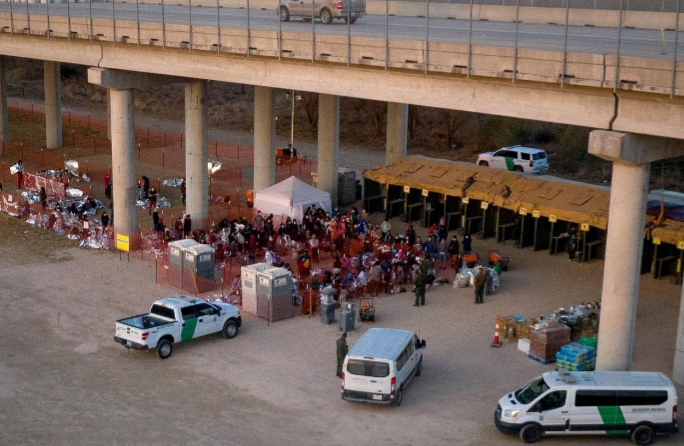 If you’re watching mainstream media on a regular basis, you may wonder why there are virtually no pictures of the border crisis. The logical assumption is that legacy media has imposed a boycott, as in they simply refuse to cover it.

This is the exact opposite of what legacy media did during Trump’s presidency, when every day was a scandal about what Trump did or said, even if he didn’t say or do anything. Now, with Biden in the White House, the media is pretty much complacent, and even those outlets that tried to cover the border crisis received a verbal order to put the kybosh on border-related-news-stories.

It’s pretty funny, but apparently, the media is mad about the Biden administration telling them what to do, and they even mention that Donald Trump never did that:

The Biden administration is restricting the information Border Patrol agents and sector chiefs can share with the media as a surge of migrants tests the agency’s capacity at the southern border, according to four current and two former Customs and Border Protection officials.

The officials say the restrictions are seen as an unofficial “gag order” and are often referred to that way among colleagues. The officials requested anonymity because they are not authorized to speak to the media about the topic.

Border Patrol officials have been told to deny all media requests for “ride-alongs” with agents along the southern land border; local press officers are instructed to send all information queries, even from local media, to the press office in Washington for approval; and those responsible for cultivating data about the number of migrants in custody have been reminded not to share the information with anyone to prevent leaks, the officials said.

Multiple news organizations, including NBC News, have requested access to or photos from inside overcrowded border processing facilities holding unaccompanied migrant children; they have been denied. The DHS press office released one photo late Tuesday of a mother and child undergoing a health screening inside a border facility, but no wider shots to show conditions or sleeping arrangements.

At the height of the Trump administration’s child separation policy in June 2018, it allowed media to tour facilities where separated children were held.

The new restrictions have been passed down verbally, not through an official memo, the officials said. The unofficial policy has led some agents at the border to release videos that show mass arrests and surges of migrants without permission from Washington, two officials said.

Customs and Border Protection and the Department of Homeland Security have not offered any media tours of the newly opened processing facility in Donna, Texas, which is reported to be over capacity with unaccompanied migrant children, a DHS official said.

It’s clear now that the Biden regime literally invited all Central America to come in the US and live on welfare, and obviously, a lot of people are taking up the offer. If you have a kid with you, even if not your own, you can deal with border officials more easily, so  illegals are just grabbing (borrowing/buying/kidnapping, who knows?) kids from wherever and they are bringing them in the US along for the ride.

Nobody knows how many illegal crossings take place, as the number is vastly increasing by the day; there are hundreds of thousands potentially every month since Biden took office. In February alone, 100,000 border jumpers were arrested, which means hundreds of thousands managed to make it across the border clean.

It’s obvious that at some point in time (sooner rather than later), the Biden regime will open the “child detention centers” and dump hundreds of thousands of illegal aliens into the US.

Welcome to Los Estados Unidos de Norteamerica, friend. This used to be the country of los gringos, but they gave it away for free:

The U.S. government plans to house up to 3,000 immigrant teenagers at a convention center in downtown Dallas as it struggles to find space for a surge of migrant children at the border who have strained the immigration system just two months into the Biden administration.

The Health and Human Services Department is rushing to open facilities across the country to house immigrant children who are otherwise being held by the Border Patrol, which is generally supposed to detain children for no more than three days. The Border Patrol is holding children longer because there is next to no space in the HHS system, similar to the last major increase in migration two years ago.

“I am incredibly proud of the agents of the Border Patrol, who have been working around the clock in difficult circumstances to take care of children temporarily in our care,” Mayorkas said in a statement. “Yet, as I have said many times, a Border Patrol facility is no place for a child.”

The growing number of child arrivals comes at politically charged moment, with Congress taking up immigration legislation this week. Biden has delighted pro-immigration advocates by backing a bill to offer a path to citizenship to all of the estimated 11 million people in the U.S. illegally. He also suspended several Trump-era policies to deter asylum, including one that forced them to wait in Mexico for court hearings in the U.S.

Border agents are apprehending more than 400 children a day on average, far more than the number of children that HHS is processing and releasing to sponsors. The Biden administration has announced several policy changes to try to expedite releases, but experts and immigration lawyers say the government could do more to speed up the process, particularly of releasing children to their parents in the U.S.

READ  IN BIDEN’S AMERICA, ONLY SOME LIVES MATTER:

This shows what incompetent scum this administration is. Now what the hell are you going to do with thousands of little children with no proof of citizenship or contact information? Seriously, these sociopaths didn’t see this coming? This is an unimaginable disaster and it’s only the beginning.

The truth is that the Biden people created this crisis on purpose, so they can literally stop processing illegal aliens altogether and go full open borders.

You might be inclined to believe that the “Democrats” are working hard at replacing the American people with these “new people”, the “new Americans” so to speak.

And you would not be wrong.

The media wants the same thing, and behind everything you will find the so-called donor class, plus the big money corporations, which all follow the globalist agenda, i.e. to replace the European population in the US and give citizenship to illegal aliens who just came in and grabbed a piece of the pie.

It blows my mind how people can’t put this together.

2) Lock down the population with continued covid-related bullshit

5) Statehood for PR to tip the Senate forever.

6) Unrestricted immigration into red states to turn them blue.

In Commiofornia it’s legal for illegals to get a driver’s license. The illegal can register to vote at the same time. They ask if you’re legal but don’t require proof if you say yes. Advocates also brief them on how to get all the freebies and forged papers.

The end game is one party state forever. Welcome to Amerika.