Something uniquely telling about these remarks today before the United Nations. Something transparently obvious that most will miss.

While bragging about how the United States is the world’s leading provider of COVID-19 mRNA gene therapy, Biden notes it will take a “collective act of political will” to deal with a public health emergency. Think about that carefully. WATCH:

TRANSCRIPT – “Bombs and bullets cannot defend against COVID-19 or its future variants. To fight this pandemic, we need a collective act of science and political will. We need to act now to get shots in arms as fast as possible and to expand access to oxygen, tests, treatments to save lives around the world.

And for the future, we need to create a new mechanism to finance global health security that builds on our existing development assistance, and Global Health Thr- — and a Global Health Threat Counc- — Council that is armed with the tools we need to monitor and identify emerging pandemics so that we can take immediate action.

Planes carrying vaccines from the United States have already landed in 100 countries, bringing people all over the world a little “dose of hope,” as one American nurse termed it to me. A “dose of hope,” direct from the American people — and, importantly, no strings attached.

And tomorrow, at the U.S.-hosted Global 19 — COVID-19 Summit, I’ll be announcing additional commitments as we seek to advance the fight against COVID-19 and hold ourselves accountable around specific targets on three key challenges: saving lives now, vaccinating the world, and building back better.” (Transcript Link)

See also  SHOCKING: Manchin Says NO to Biden When Asked To Doing This In The Senate 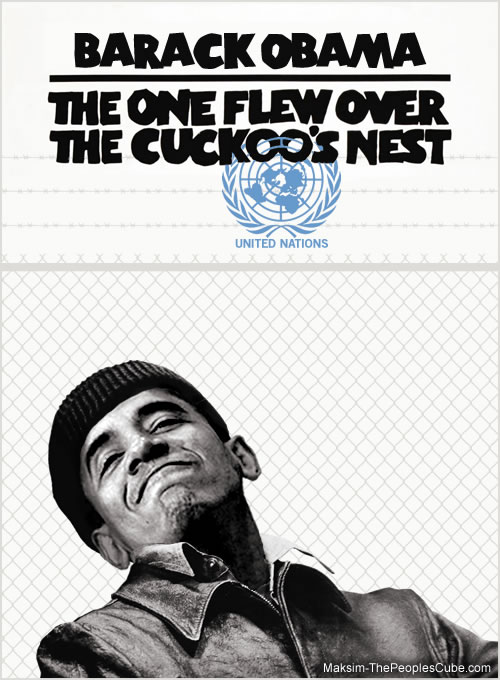 It’s easy to snark about the United Nations and the globalist ideological alignment between “build back better” and the “new world order.”   However, those who dismiss the overarching use of the U.N. to attain leftist objectives are leaving themselves very vulnerable to a blind spot in their defense of freedom.

It wasn’t an accident that Barack Obama received a Nobel prize for doing nothing in his first year other than getting elected president.  The ruling classes loves them some leftist Obama ideology; they worship at this altar of elitist government and control.

Never, and I do mean never, take your eyes off what is happening in/around the U.N. as it relates to domestic policy pushed by Obama’s network…. which is, not coincidentally, in direct alignment with the United States Department of State.

These are the radicals creating the architecture of the one-world government and open society.

The Chinese and Russians have no time or inclination to engage this crew on an ideological level… except to extend their own support -within the organization- toward anything that will destroy the mechanisms of the global economy, ie. the U.S. dollar as the trade currency.   The Chinese and Russians have their own interests, and they play amid this “we are the world crew” with specific intent that is not aligned with the ordinary citizen of any nation.  Why would they want to get in the way of Obama or Biden?

The Obama network always knew their biggest challenge were the people within the United States who were staunchly against big oppressive government.  Freedom, in almost all forms, is antithetical to the principles of government control.  As a consequence, Obama’s group have always worked to align themselves with any ally that can help to shift the dynamic within the U.S. as a constitutional republic.  The United Nations is one such allied group.

The core principle of the U.N. was a central governmental body that will act as an arbiter of equity around the world.  These are the people who view their role as distributing social, economic and technological wealth to those around the world with less capacity for creation.

We can call it different names, but the underlying value system they follow is a singular set of collective governing rules that control the outcomes of all independent nations.   This is the core mission of the United Nations.  Collectivism is their credo; and through that outlook, the natural and innate freedom of the individual is a threat.

Always keep this in mind.

When we do end up in that place where the proverbial ‘Skynet’ has been activated; and when we recognize that free people now have to operate as an insurgency against the forces of the collective agreement seeking to control every aspect of our lives; it is only by understanding how they will weaponize the desire for peace that you will recognize when your liberty is being removed.