Emerging markets traditionally refer to nations whose economies are growing steadily on the path to becoming advanced but are not yet classified as developed economies.

However, in the last couple of years, the stock markets of Asia have seen a rapid development that makes it difficult to refer to countries such as China and India as lagging. In fact, the economies of the Asian tigers, namely South Korea; Singapore; Taiwan; and Hong Kong, are arguably high-growth economies on track to becoming some of the biggest financial centers in the world.

Meir Barak, professional day trader and founder of Tradenet, an online trading academy – “ if you wanted to be rich in the 1800’s you would move to London, in the 1900’s you’d move to New York and in 2000’s you’d move to Hong Kong” – but that rule applies for business in general, he adds. “If you want to be a successful stock trader in the 21st century, it really doesn’t matter where you live as long as you have internet access to trade the NYSE and the NASDAQ”.

There are many speculations as per the reason for the lack of a strong, healthy day-trading community for the Asian markets. Although Asian markets have grown tremendously well (see chart) during the past four years, most of the trading is still concentrated in New York. Meir Barak’s response to the mystery is that “day trading in stock exchanges is a natural monopoly – everyone wants to be where everybody is. And that place is New York”, Meir adds.

Nonetheless, Asian countries have some common denominators such as high saving rates, educated populations, increased focus on exports, and resilience in the face of geopolitical instabilities. It is quite interesting that many stock traders are still fixated on trading in U.S. markets such as NYSE and NASDAQ despite the presence of opportunities for trading profits in Asia. This piece provides insight into the opportunities and risks in the unexplored markets on Asia.

The global markets are moving eastwards

China and India are two of the largest economies in the world, and the sheer economic figures support the macroeconomic factors of labor-intensive manufacturing. On top of that, the region enjoys surplus from mass-produced low to medium tech products in ASEAN countries. The reality is that the 21st century’s world order has moved eastwards. China could soon surpass the US to become the world’s largest economy, India is already an economic super-power, and the ‘Asian Tigers’ are growing ever stronger. 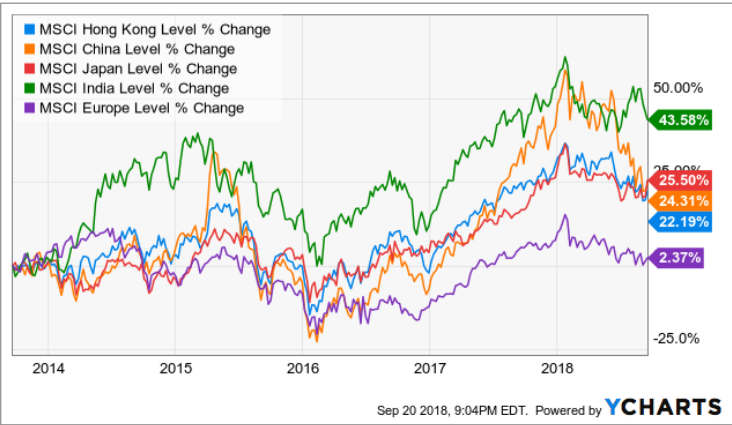 Here’s why you should be careful trading in Asian markets

There are enough macroeconomic factors suggesting that the economic superpowers of the next decade and beyond will surface in Asia. For stock traders, the opportunities for arbitrage trading in emerging markets are huge. For one, the fluctuations in exchange rates often means that stocks, commodities, and other assets tend to be priced differently on different exchanges in different countries. In the West, for comparison, more developed, computerized trading methods find means to close the gap for arbitrage.

In addition, Asian governments have committed fiercely to facilitate a turnaround that moves the economic power from the West to the East. China, for instance, has a manufacturing sector blueprint to attain make “Made in China” a global phenomenon by 2025. Those could provide for an unprecedented cash injection into the Chinese economy, which in turn would surely affect positively on markets.

The unique advantage of trading in US Markets

Despite the fact that there are some opportunities for profit by trading in Asia than by sticking to the established markets in U.S., many traders still choose to stick to the NYSE and NASDAQ. For one, the stock markets in emerging economies are still at the risk of external interventions that could result from geopolitical instabilities. The brewing trade wars between the U.S. and China could see some Asian countries such as South Korea, Singapore and Taiwan caught in the crossfire – and with debilitating effects on their stock markets’ stability.

Secondly, Asian stock markets have smaller trading volumes. Hence, they run bigger risks of front running and market manipulation by a determined and unscrupulous player.  The worst part is that there is less regulatory oversight. Therefore, a successful market manipulation might have gone on for far too long before regulators detect and stop the anomaly. Hence, going forward, many traders in the West would still prefer to keep their funds in the mature stock markets of US. In Meir Barak’s words, “NYSE and NASDAQ have proven themselves to be open, fair, and transparent. Asian exchanges have not been around long enough to prove the same.”

Finally, the US markets, NYSE and NASDAQ, are the only ones in which we see patterns that are repeating themselves and can be preidentified. Barak concludes: “even the best traders are dependant on some predictability on market behavior. I’ve never seen markets such as the American ones, where a trader can take advantage of predetermined market patterns.”

See also  Markets Gyrate as Debt Rhetoric Heats Up
See also  Hedge Fund Manager: 'The US stock market is the most overvalued to fundamentals in its history. It's poised to melt down quickly on the catalyst of China's Ponzi credit implosion.'