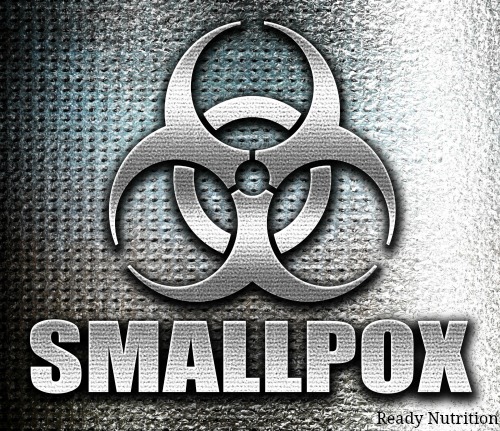 ReadyNutrition Readers, we have done several articles on biological weapons, as well as specific diseases that one might encounter with an attack by a so-called “rogue” state.  But we also know the value of a good “false flag,” that is an operation by a government and made to appear to be something different.  The burning of the Reichstag prior to World War II and blaming it on Marius Van Der Lubbe is one example.
In this vein, recently a vaccine for Smallpox has come to the forefront of news reports. An article from Outbreak News Today is reporting on an investigational smallpox vaccine that has successfully passed one of its clinical trial phases.  As a matter of fact, it is so successful that USAMRIID (the United States Army Medical Research Institute of Infectious Diseases) has been doing the testing…and is developing this as an alternative to the current U.S. smallpox vaccine.

“If approved, this vaccine will have a direct impact on improving force health protection for U.S. Soldiers and other service members who are required to be immunized against smallpox,” said COL Gary Wheeler, commander of USAMRIID.
According to Paul Chaplin, President and Chief Executive Officer of Bavarian Nordic, IMVAMUNE has been given to more than 7,800 subjects in 21 clinical studies, including this trial and one other Phase 3 study. He said the company plans to file a Biological License Application with the U.S. Food and Drug Administration later this year.
“This program has only been possible through the consistent and strong support of numerous U.S. Government agencies and demonstrates what can be achieved through a successful public-private partnership to protect the public from the deliberate release of the smallpox virus,” Chaplin added.

If the disease was eradicated more than 40 years ago, then why all the concern now?

Smallpox does not exist in its natural state outside of laboratories.  It is, however, kept as a biological weapon in many countries, including North Korea, China, Russia, and Iran, as well as the United States.  USAMRIID is located at Fort Dietrich, Maryland, the premier research facility for bioweapons in the United States, as well as a “repository” for many devastating pathogens such as Ebola Virus and Avian Flu (Bird Flu) Virus.
The kicker: the U.S. government has ordered $133 million of the smallpox vaccine, and Canada recently ordered just over 65,000 doses of this experimental vaccine, going by the name “IMVAMUNE” and produced by the Bavarian Nordic corporation.

Prepare for pandemics and other disasters with this comprehensive preparedness guide

How This Deadly Pathogen Can Affect You

Firstly, I strongly recommend going into the archives and reading the articles on bioweapons and smallpox.  I have detailed a good deal of information about herbal aids with such a threat.  In addition, emphasis must be placed on the fact that it is possible to obtain such medicines in Canada and bring them into the United States.  Before you are rendered completely aghast, remember there are legal methods for obtaining such meds, provided they aren’t banned in the United States.
But if the United States government is testing them for its use it makes it highly likely that you may be able to import some for yourself.  We faced a similar situation back around 2009-2010 with stockpiles of Tamiflu running out.  Granted, it is not a “perfect medicine,” but it is better to have something and have the choice of whether to use it or not than not to have it and have no choice whatsoever.
Again, as with all SHTF scenarios, you’ll have to weigh what you can do and what you will do in order to ensure that you have a fighting chance with all of it.  Stay in that good fight.

READ  Biden to US Troops in EUROPE: “This is Not a Joke – The Greatest Threat Facing America is Global Warming” (VIDEO)
710 views