I did an interview a couple of weeks back and predicted that the stock markets would begin a large decline soon. I based that on tea-leaf reading of the DSI readings for the S&P, the Nasdaq and the Nikkei. Since then the DSI for volatility has also dropped to a potential extreme level.

In the very first piece I ever wrote about investing in gold and silver I talked about reading a news article in March of 2000 about inmates in a jail in Baltimore holding stock picking contests marking the top. Or ringing a bell as it were.

If you want to make money investing or even keep what you have, you must understand contrarian thinking. They absolutely do ring a bell at tops and bottoms but you have to be listening for the sound of bells to notice.

See also  Are We Setting Up for Another 1987-Type Crash?

Barron’s did a piece two weeks back titled This Bull Market Has No Expiration. Ding. Ding. Ding. So the stock market is going to keep going up forever. Why didn’t I think of that?

Not to be outdone, Bloomberg Businessweek released a piece dated the 22nd of April where the cover showed a picture of a dead dragon. I suppose representing inflation. The piece was titled Is Inflation Dead? 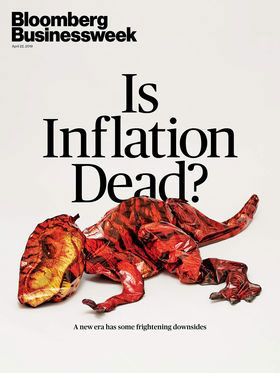 In an effort to prove the theory of Einstein that stupidity is without limit, theHouston Chronicle did a story about a politician in Houston who is investing the spare cash from his campaign in the stock market.

The DSI on volatility dropped to as low as 14 a couple of days ago. Certainly it is not in the same category as it hitting 97 in late December just before shares exploded higher. Nor is it as low as it got in January of 2018 when it touched 7. However in both cases, I noticed that a number of seemingly unrelated commodities all turned at the same time. I suspect that is going to happen once again. Lumber, soybeans, wheat, the Swiss Franc and gasoline are all at or near extreme readings.

When Barron’s takes a position that the stock market is going up forever and Bloomberg realizes that inflation will never again be an issue and politicians start day trading with campaign funds there is clanging as you rarely will hear.

Sometime in the few days or so, the stock market is going to crash.