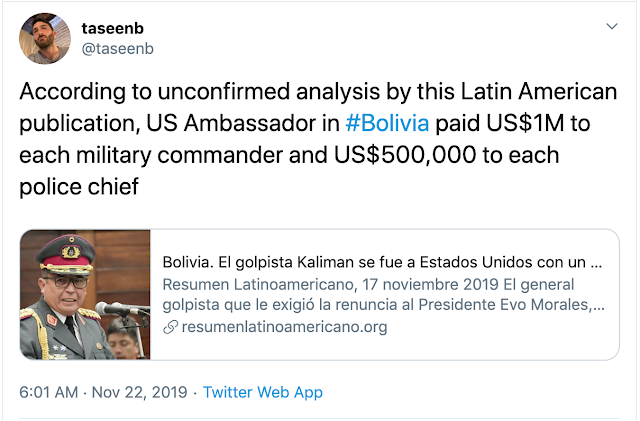 Evo Morales fled the country after a U.S. engineered Fascist Military Coup. The U.S. bribed Bolivia’s Army chiefs with $1m each and the senior police chiefs with $500,000 each.

There were no election irregularities.

This is a complete fabrication by the Neocon / Neoliberal Fascist US funded OAS, in order to prepare the ground for the Fascist Military Coup which occurred on November 10.

No Evidence That Bolivian Election Results Were Affected by Irregularities or Fraud, Statistical Analysis Shows
cepr.net/press-center/press-releases/no-evidence-that-bolivian-election-results-were-affected-by-irregularities-or-fraud-statistical-analysis-shows

None of the above is ever mentioned in Western Corporate Disinfo Media, who are all supporting the illegal Fascist Military Coup that has put extreme racists into power in Bolivia who are already persecuting and murdering the indigenous people who make up 70% of the population, shutting down the Free Press and rounding up and jailing opposition (Morales supporting) politicians and journalists.

My prediction one day after the US engineered Fascist Military Coup in Bolivia.
Watch the video of Morales’ VP and senior government colleague being paraded in front of a Kangaroo Court by members of the Coup Regime:
twitter.com/Ian56789/status/1193707571212902402 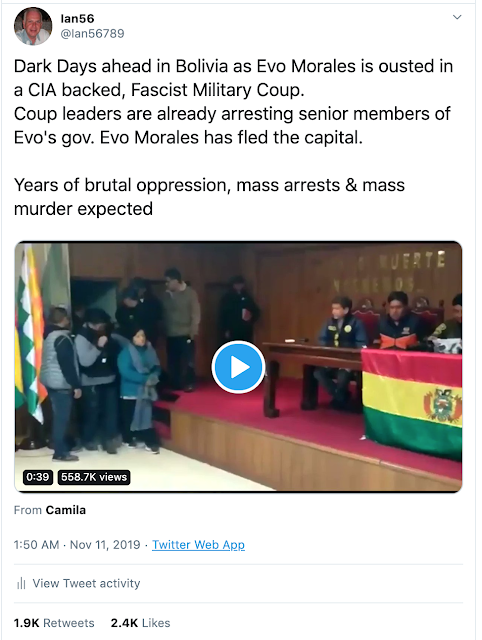 This is what the US government and media calls “Restoring Democracy”.

The fraudulent claims by the OAS and Western sourced propaganda were used to trigger violent protests against the Morales government. Morales refused (or was unable) to use force to put down the violent US and Plutocrat backed protests.

Morales made the catastrophic mistake of putting people into senior positions of power in the Army and Police, who had spent time in Washington DC (and were thus able to be recruited by the CIA) and the infamous School of the America’s (now renamed WHINSEC) at Fort Benning, Georgia – the training ground for right wing Military Dictators, Death Squads and Torturers since the 1980’s.

Morales legitimately won the election held on October 20.
The final result was Morales 47.1% and Carlos Mesa 36.5%.
This fulfilled Bolivia’s election rules to not require a second run off election (winner has to get more than 40% of the vote and be more than 10% ahead of the second place challenger).

After the result was fraudulently challenged by the OAS and there were violent protests on the street, Morales offered to hold a second run off election anyway, to placate the protesters.

This was rejected by the Coup plotters and the US.
The US and the Plutocrats knew they couldn’t win in a legitimate and fair election – they would lose by around 10% of the vote.
The only way they could oust Morales was by some kind of anti democracy Coup D’Etat – which they were already busily engaged in planning and engineering even before October’s election.

Morales’s calls on the Bolivian army and the police to protect his government fell on deaf ears. Police units almost immediately abandoned their posts, including protecting government buildings. They joined the fascist-led marches against the Morales government. When the head of the army called for Morales to resign the coup was completed. As with the U.S. coup effort in Venezuela, reports are emerging that various generals and police officials were secretly offered U.S. bribes to defect. The price of a Bolivian general, according to these reports, was said to be $1 million, while lower racking police officials were said to be had for $100,000 – both sums a mere pittance to be paid by CIA officials via a briefcase stuffed with bills printed by the Federal Reserve or U.S. Treasury for such occasions! But the heads of Bolivia’s police and military are no strangers to political intrigue. Defecting commander-in-chief of Bolivia’s police, Vladimir Yuri Calderon, served as military attaché at Bolivia’s embassy in Washington, D.C. until December 2018. Defecting Williams Kaliman, who heads Bolivia’s armed forces, held the same position between 2013 and 2016.

The above is extracted from “Bolivia: Anatomy of a Coup”
www.counterpunch.org/2019/11/29/bolivia-anatomy-of-a-coup/

It is now thought the real reason for Ivanka Trump’s strange visit to Jujuy in Northern Argentina, September 5, was to arrange or make the payments to bribe Bolivia’s Army & Police Chiefs with $1m and $500,000 each for the Fascist Military Coup on November 10. 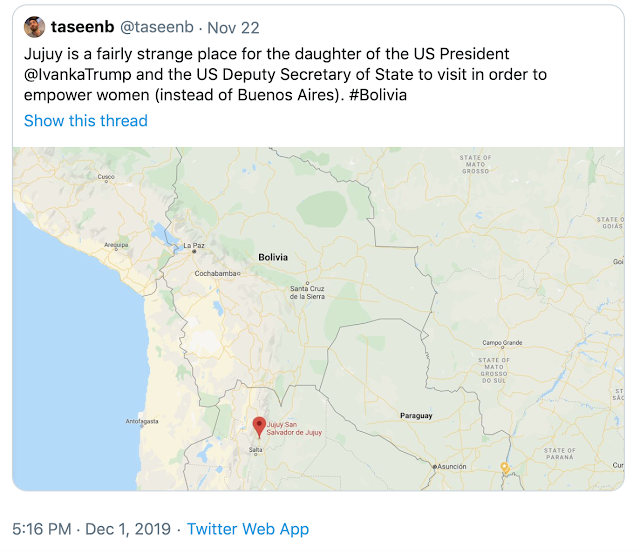 The US government has been plotting to overthrow Morales, to install a right wing Neoliberal Corporatist government more favorable to their interests, in Bolivia for some time.

Bolivia has the largest reserves of Lithium in the world.
These reserves have yet to be developed.
Morales was negotiating deals with China and Germany to use these reserves to manufacture electric car batteries in Bolivia for export, instead of just exporting the raw material.
This would have created thousands of jobs in Bolivia, lifted many more people out of poverty, and grown Bolivia’s economy. 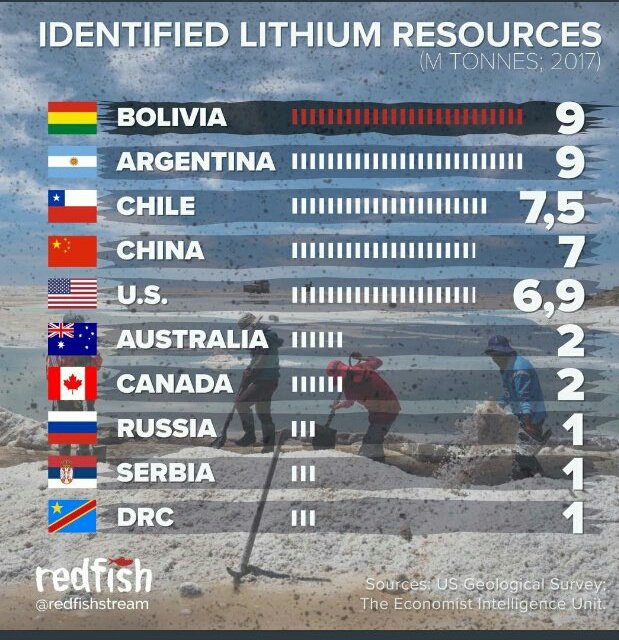 Using Bolivia’s Lithium reserves to manufacture car batteries instead of exporting the raw material to American car companies was unacceptable to the U.S. government.
The U.S. government wants to keep Latin America poor so it can more easily control it.
The same reason European Colonialists have wanted to keep Africa poor since they started colonising it, 200 or more years ago.
And the Spanish and Portuguese colonised South and Latin America 500 years ago.

The new US installed Regime in Bolivia will now impose somewhat similar conditions to that imposed on South America by the Conquistadors and Jesuits 500 years ago.
They will persecute, impoverish and enslave the indigenous population which makes up 70% of Bolivia’s current population, for the benefit of people of White European extraction.
The self declared “Interim President” of Bolivia, Jeanine Anez is an extreme self confessed racist and “Christian” Fundamentalist, who has called the indigenous people and their culture “Satanic”. 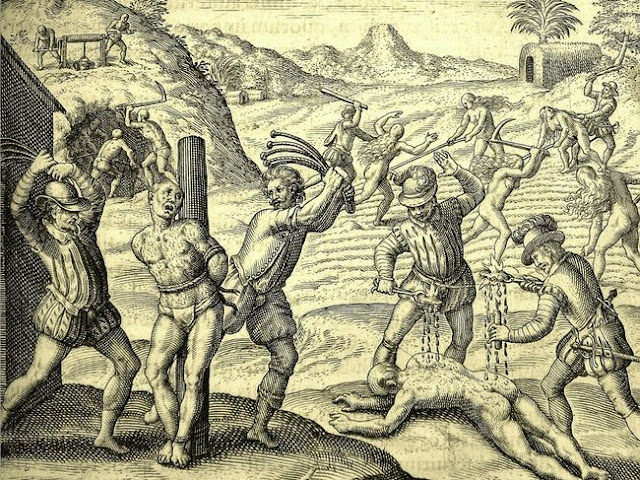 Morales supporting “Opposition” politicians and journalists are already being rounded up and jailed for “sedition”.
The Morales supporting Free Press is being shut down.
Morales has been accused of being “a terrorist”. He is now in exile in Mexico who have given him political asylum.

The new Regime is NOT a democracy.
Having come to power in a Military Coup they will not give up power easily, otherwise they will be the ones legitimately being locked up for Treason and Sedition for overthrowing the legitimate government of Evo Morales by force, with the aid of a Foreign Power (the U.S.).

Morales wasn’t really a Socialist as portrayed in the Western media.
He was more of a pragmatic capitalist who encouraged economic investment (including foreign investment) and private enterprise to grow Bolivia’s economy.
Morales did nationalise Bolivia’s natural resources, such as its sizeable Natural Gas reserves to benefit ordinary Bolivians instead of benefitting US and Canadian multinationals.
He also set up social safety nets for the poor.

Morales definitely wasn’t a Neoliberal – the system of Corporatism and Endemic Corruption in place in the US, the EU, and US backed countries in South and Central America.
Neoliberalism transfers wealth and power to the very rich at the expense of the middle class and the poor – Morales did the exact opposite, see below.

Morales had the best economic record of any country in South America since he became President in 2006.
All of the benefits of rapid economic growth went to the lower 90% of the population and hardly anything at all to the top 10% wealthy Bolivians of European extraction who owned and controlled the country before he became President and who have now been restored to power by the US engineered Fascist Military Coup. 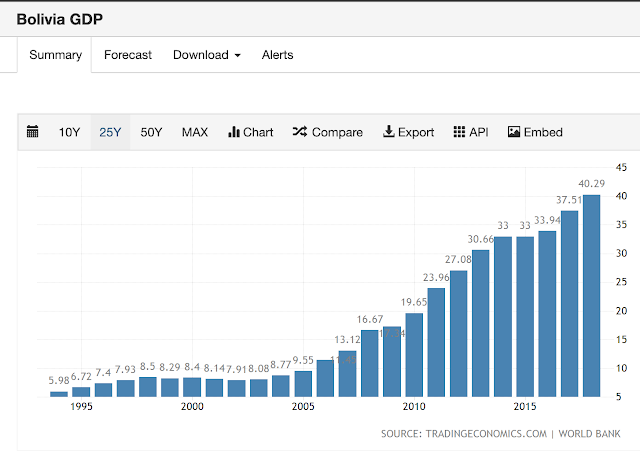 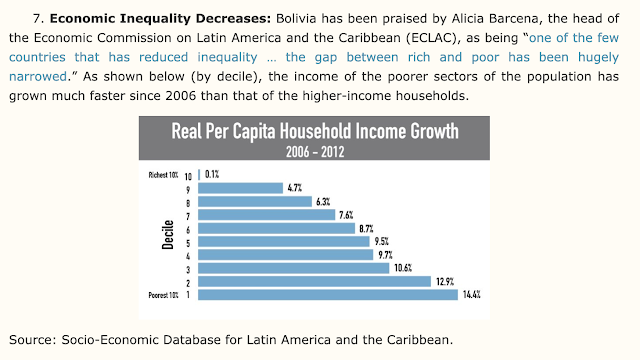 Morales lifted huge numbers of Bolivians out of the poverty they had suffered under the wealthy Plutocrat class for centuries before he became President.
He reduced the illiteracy rate to near zero.
The living standards of ordinary Bolivians were greatly improved.

Which other country has had 400% economic growth in the last 12 years?
Not too many.

Bolivia’s minimum wage.
These numbers are in Bolivian Bolivianos – divide by 6.9 for current US dollar equivalents. 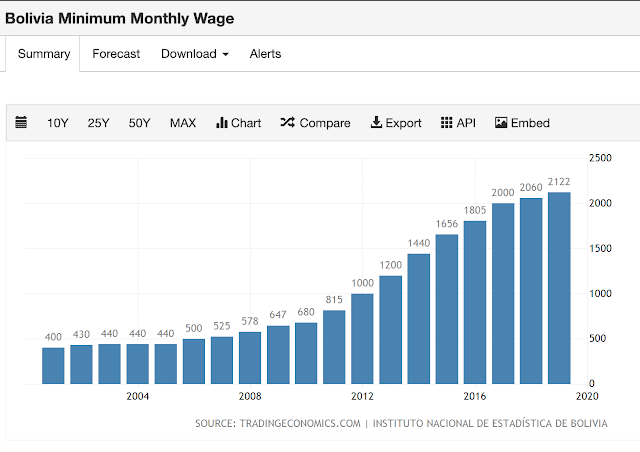 Morales also angered the U.S. government by closing the US military base in Bolivia early in his Presidency, supporting the Palestinians instead of the Israelis, and for making a very famous speech at the UN in 2018, sitting two seats down from Donald Trump and Mike Pompeo at the UN Security Council.
If you haven’t seen it yet, I highly recommend watching it: 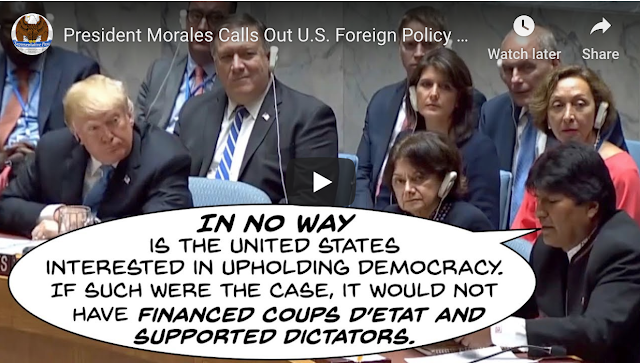 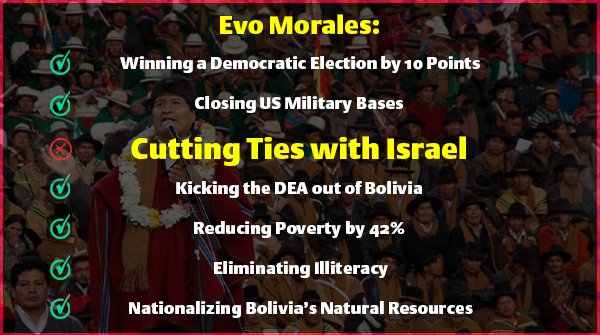 The new US installed Coup Regime in Bolivia was very quick to reverse Morales’ Foreign Policy –
shutting down ties and cooperation with Venezuela, Cuba, and China; and reopening diplomatic ties with Israel.