Page #294 contains notes an FBI agent wrote down in regards to what was found on Anthony Wiener’s laptop. 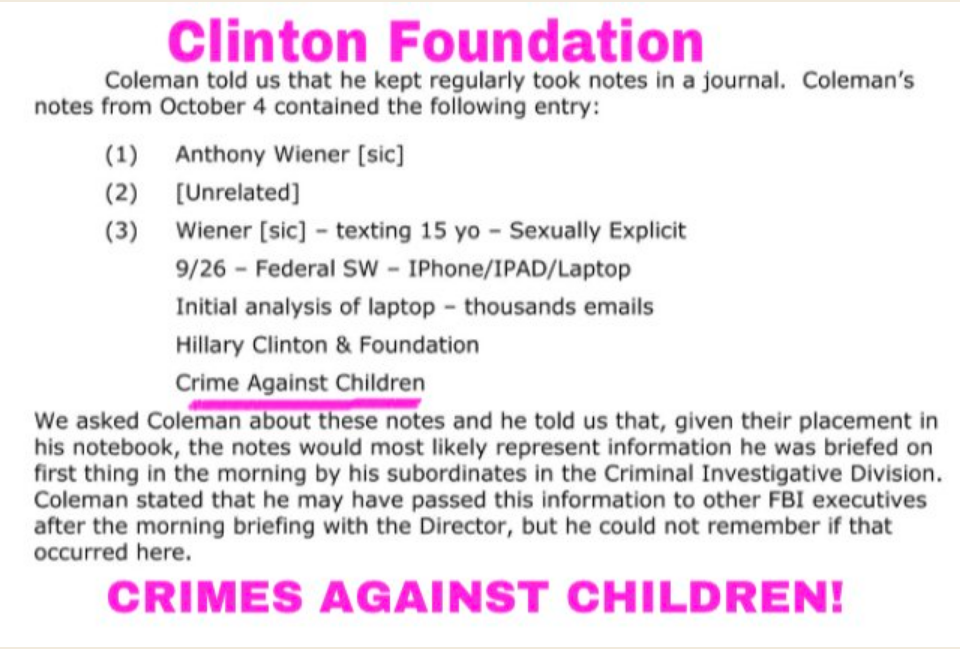 Laura : “On page 294 of the (IG) report Bobby…It kinda jumps out from the page at you…It’s titled Hillary Clinton and Foundation crime against children….And it references all the emails that were on this (Anthony Wiener’s) laptop… And there was an effort to I guess sequester certain emails away from the probe.. You can see Coleman’s notes from Oct 4th contain the following entry…Anthony Wiener texting 15 yo- sexually explicit…Initial analysis of laptop thousands emails Hillary Clinton and Foundation crime against childrenBut they had a conversation about which ones would be allowed to be looked at in this case and which would be set aside… And that also raises a lot of questions…..I mean… Huma Abedein and Hillary Clinton exchanged thousands of emails apparently…That I don’t think were even looked at- at all….And Bobby your reaction here……

Bobby: “Yeah I think that specific question had to do with the search warrant….So the NY office of the FBI who initially got the search warrant for that laptop…It was for the sexual crimes case against Anthony Wiener…And that had specificity requirements of the warrant..So you can only look at certain things….So they were looking for emails of that type…When it was transferred down to DC for the Clinton email (inaudible) they were looking for different things and that’s why the call went from NY to DC 2 weeks later saying “Hey did you guys get your warrant? You need to get a warrant for the stuff you want to look at on that laptop”… And to Sol’s point it’s my opinion they were sitting on that laptop… And they thought they could sit on it till after the election…But when NY called down and said what are you doing with this…why haven’t you got a warrant for your stuff…that panicked them then they went and told Comey…. I don’t even think Comey knew because he claims not to have known…. but there’s no reason why he didn’t know.. because didn’t he go to McCabe and say why did you wait 2 weeks before you brought this to me? It’s beyond the pale…. It’s not believable…..