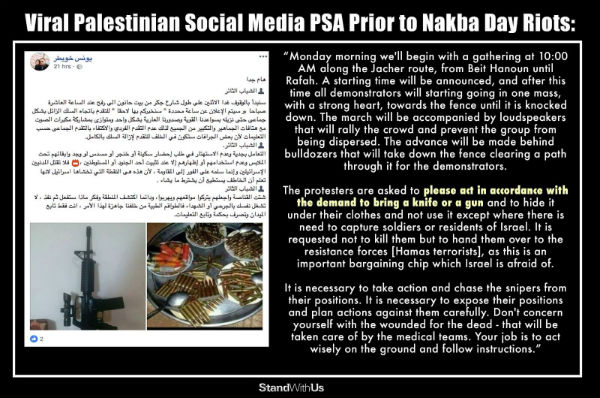 It is very obvious to me that even smart people are incredibly gullible, as they’re demonstrably propagandized by the left-wing MSM, and they are ignoring absolutely everything Israel says (by the way, since when do you believe what the mainstream media is telling you?), while taking reports from basically Islamic terrorist organizations (Hamas et al) like they were the word of God, today we just got word about  a Hamas official, Dr. Salah Al-Bardawi, who admitted live on TV that 50 out of the 62 so-called martyrs (all Muslims who die in Jihad against the infidels are martyrs) killed by the IDF during the Gaza protests yesterday were Hamas operatives. So, the so-called peaceful protesters killed by those monstrous child-eaters (that would be the Jews) were actually Islamic terrorists, Hamas operatives and all that. What do you know? Here’s from the mouth of Dr. Salah Al-Bardawi himself:

Senior Hamas official sets the record straight on who was killed in last Hamas-orchestrated riots: "50 of the 62 martyrs were Hamas". Take his word for it. This was no peaceful protest. pic.twitter.com/oop2y3oWrB

He’s not confessing. Not admitting. Not setting the record straight. He’s boasting. This jihadist knows his support base. The more martyrs, the greater the support. They know the West too. Hence, they pretend it’s a march for some sort of return. That works too.

Currently, Israel suffers from global condemnation over the death of 62 Palestinians, described as peaceful protesters by the mainstream media, who tried to breach the Israel-Gaza border in the same day the United States inaugurated our new embassy in Jerusalem. Now, Dr. Salah Al-Bardawi boasts in an interview that the vast majority of the casualties were members of a world known terrorist organization, backed by Iran of all people. Another “peaceful” organization, freedom loving folk from the Palestinian Islamic Jihad, also admitted that 3 of the “protesters” killed by the Israeli army on Monday were members of its Saraya al-Quds military wing. Which means jihadists, Islamic terrorists.

READ  PFIZER CEO's Israel visit CANCELLED because he is UNVACCINATED!

Now, if you put two and two together, you’ll see how the globalist left-wing mainstream media is playing Westerners for fools, taking the side of Islamic terrorists who are trying to wipe Israel off the map. As per IDF spokeman Lt. Col. Jonathan Conricus in an interview for the Times of Israel:

“This proves what so many have tried to ignore: Hamas is behind these riots, and the branding of the riots as ‘peaceful protests’ could not be further from the truth,”

And speaking of peaceful protesters, here’s what was circulated on Twitter by Palestinian Muslims prior to the Monday protest, calling on Gazans to bring weapons to the “peaceful” border protest:

Dozens and dozens of posts calling for Palestinians to bring guns and knives to kidnap Israeli civilians: #Gaza pic.twitter.com/6Fh8oEaJrH

This is the reality behind the mainstream media propaganda. The Jews overreacted, right?

Why does Hamas want to destroy the security fence? pic.twitter.com/XCt04ZeJSm

If the Muslim apologist media did report on the catapult it would be to insist the “peaceful” Palestinians were catapulting bouquets of flowers into Israel. Joke aside, these latest revelations kind of screw up the whole “oh, they’re just innocent Palestinians out there, no relation to our organization at all, just out shopping and picking posies” narrative the FraudStream Media has been grooming so carefully for them, doesn’t it? If you ask me, protesting is one thing, yet rioting is another. These are professional terrorists and should have been dealt with much more harshly and with greater deadly force by Israel. This is war by Hamas, but it is war on two different fronts (and by the way, this is nothing new). They are sending women and children to protest at the border, because, the death of a woman or child protesting might cause outrage by people around the world; however, they are attempting to actually kill Israelis too. It’s a no win situation for Israel, and they are doing the best that they can do imho.

READ  Media blackout in Israel—“When you don’t take the vaccination, your life is basically over”

What’s really sad is that  their plan is working perfectly. They constantly get sympathy from the West even though they’re an Islamic  terrorist organization. And now they infiltrate the Europe and the US through immigration via Syria et al, and they’ll try to take over and cause violence from within (they’re already doing it in Europe) – all while the media paints them as good people.