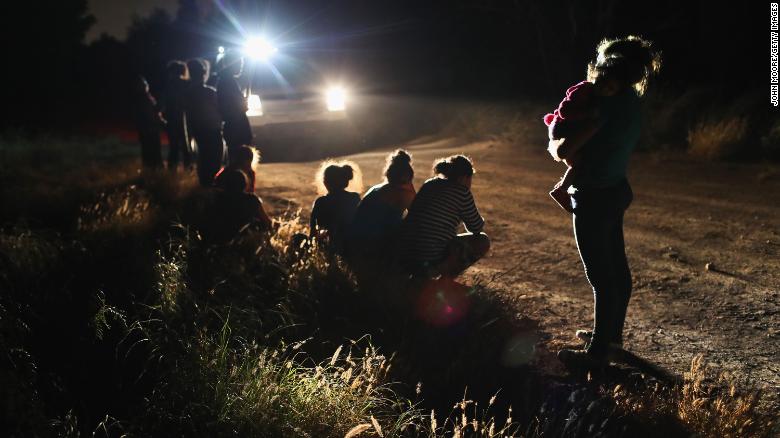 Here’s the easiest solution to the current controversy regarding illegal immigrant children being separated from their families: don’t enter the country illegally, don’t break the law, don’t try to sneak into America. If you don’t do that, you won’t take the risk of being torn apart from your families and children won’t be crying for all of us to see so we can signal our virtue.

Don’t like what President Trump is doing? Change the law! He is not embarking upon some dark-rooted quest to destroy families and keep children apart from their parents. He is merely enforcing the law and defending our country from criminals. These laws were passed by both Democrats and Republicans.

No human being is illegal, you say? I respond with borders, language, and culture. If you don’t have those three things, you don’t have a country. But you don’t want that anyway because you hate America and all we stand for, right? All other countries in the world have strict immigration laws. They adhere to low immigration quotas and implement a merit-based system, only allowing in people who will significantly contribute to their economy and support themselves. The open borders experiment is crumbling across the European continent as we speak.

Enough of the outrage over children being separated from their families. It’s not happening like you think. This whole story that broke last weekend is full of half-truths, misinformation, and Fake News. It is being blown out of proportion and the Democrats are using it to their advantage in an attempt to take back the House this November and uproot Donald Trump from the White House in 2020.

I’m sorry my lefty friends, but that tactic ain’t gonna work. You can only call Republicans heartless racist so many times. Americans really care about safety and immigration, craving a country with impenetrable borders, a shared language, and a thriving culture.

Oh yeah, and guess what? Obama did it too. Barry O was regularly hailed as the deporter in chief and while responding to a spike in illegal border crossings, he stepped up enforcement and children were regularly separated from their families. But of course this was never covered to the extent that Trump’s enforcement of current federal law is today by our biased, hypocritical, and lying mainstream media.

Since 2008, the U.S. has had a policy known as the Alien Transfer Exit Program (ATEP), which focuses on detaining male migrants of Mexican descent. Once an illegal alien is detained crossing the border, they are flown or bused elsewhere in the country and sent back across the border at another point of entry, usually thousands of miles from where they first entered.

Although Obama barely used it over his first few years, his administration stepped up its use of ATEP by 2011 as Mexican nationals poured over the border. Many male Mexican nationals detained at the border often come with their families. When ATEP is used, the men are taken away from their families, while the wives and children are placed in detention centers. The men are eventually released into some other part of Mexico far from home while their families are likely to be deported to where they originally entered.

A few stories about the family detention centers the wives and children were held in were written during the Obama era. However, the mainstream media was blind to it, to no one’s shock. In fact, dozens of stories about the Nogales Placement Center were written by journalists at Shadowproof. Never heard of them? Yeah, me neither.

Senior White House advisor Stephen Miller blames Obama and the Democrats for the current immigration crisis. However, both parties are certainly culpable.

As the White House is trying to secure the border and enforce federal immigration law, it is blaming former President Obama’s catch and release policies and other legal loopholes promoted by Democrats in Congress as children continue to pour across the border because we fail to detain them and almost always let them stay in the country without any consequences, despite the fact that they are breaking the law.

Here’s what Miller had to say:

“When you want to talk about what’s cruel and what’s inhumane, we should talk about the consequence of loopholes that make it almost impossible to remove individuals showing up in our country illegally, therefore driving massive numbers to take the dangerous trek, leading to more instability in sending countries; leading to more instability in receiving communities; and contributing to the rise of very dangerous transnational smuggling organizations.”

That’s one point to mention, the coyotes who smuggle these immigrant children across the border are very bad hombres. They regularly rob, rape, and kill. They’re all either working for the drug cartels or financially indebted to them. The Clinton-Bush-Obama policies that failed to enforce the laws as are written have resulted in this out of control calamity we are witnessing today across our southern border.

Therefore, the Trump administration is poised to do away with the Obama era loopholes that have only encouraged more children to dangerously make the trek into America.

Here are the statistics the White House claims to back up their current strategy to curtail illegal immigration:

Let’s keep this in perspective, these are not undocumented workers, these are not Dreamers, these are not immigrants, they are illegal aliens and they are breaking the law and using its loopholes to their advantage. Increasingly, children come across the border without their real parents and claim that their human traffickers are their family so they can gain entry into the U.S. I’m sorry if this all sounds harsh, but it’s reality. If we don’t disincentivize illegal immigration we are only encouraging more of it. Interestingly enough, with Trump’s tough talk on immigration, it appears that the rush of illegals coming across the border is surging again as they fear a real change of in the law might be soon coming down from Washington.

It is the Democrats fault for being weak and ineffective with Boarder Security and Crime. Tell them to start thinking about the people devastated by Crime coming from illegal immigration. Change the laws!

The Trump administration has regularly attempted to blame Congress for the separation of families who illegally cross the southern border. Remember the separation of powers. Congress passes the laws and the executive enforces them. That is what’s happening today.

Unsurprisingly, Republicans and Democrats appear far apart on a significant immigration bill that would put an end to family separation and institute a secure border.

The debate erupting over family separation has diminished prospects for GOP immigration legislation nearing House votes later this week. As the partisans dig in to their respective sides, families will continue to be separated because the Donald’s Department of Homeland Security has no other choice. If Congress really wanted to fix this, they could. There is widespread support that illegals in our country already should be either granted some kind of legal status or path to citizenship. They’re not going to all be deported. There is also resounding support for the ending of illegal immigration and sanctuary cities, as well as securing the border. Nevertheless, politicians want this crisis to rally their base and help them at the polls come November 2018 and 2020.

DHS Secretary Kirstjen Nielsen told reporters Monday night that the situation (1,995 children were separated from 1,940 alleged parents between mid-April and the end of May) was the “product of loopholes in our federal immigration laws” and only Congress “can fix it.” The time of turning our backs on the law is over since there is a new Sheriff in town. We are a nation of immigrants, fine, but we are more importantly a nation of law and order and we must maintain both if we are to continue to remain a country and have a culture worth protecting.

GOP lawmakers are scheduled to meet with President Trump this morning and immigration will surely dominate the conversation.

Don’t hold your breath though. Nothing of any substance will be done on immigration. It remains an unsolvable problem because of the hapless politicians who claim to be attempting to solve it. The hot button issue of immigration galvanizes the base of both parties. It excites Trump’s core supporters like nothing else. Almost a third of Republicans in the latest WSJ/NBC poll said immigration was the number one issue they cared about. Democrats also care about immigration because they want to legalize the almost one million illegals Obama let stay in the country and give them a path to citizenship. Nothing will get done because the midterm elections are approaching and strong feelings always get in the way of compromise. Cooler heads never prevail in DC.

Despite the continuing of the status quo in the halls of Congress, the White House is taking action to enforce the law. Therefore, the Trump administration could be holding up to 30,000 illegal immigrant children by the end of August as 250 children have been taken in each day over the last few weeks. Here’s something to get your blood boiling even more. When children are separated from their families, they are taken in by Health and Human Services and subsequently given medical and dental care.

“The United States will not be a migrant camp. And it will not be a refugee holding facility,” Trump said in a speech earlier this week. He went on to add, “We’re stuck with these horrible laws … what’s happening is so sad, it’s so sad, and it can be taken care of quickly and carefully,” blaming Democrats for obstructing and grandstanding in the way of a real impactful bill from being signed into law.

The Trump administration is correct in defending its current policy, which again, is nothing more than enforcing the laws on the books. Illegal immigrants need to know that if they try to enter the country, they will be prosecuted. When that happens, children can get separated from their families. That is the risk they take. The same risk involves U.S. citizens who commit crimes.

It’s time to build that wall and make Mexico pay for it. It’s time for politicians to take action if they want different results instead of lobbing rhetorical bombs at each other and signalling their virtue on cable news. It’s time to stop getting outraged over people facing hardships when they are committing a crime by trying to live in our country illegally.

It’s time to take our country back.