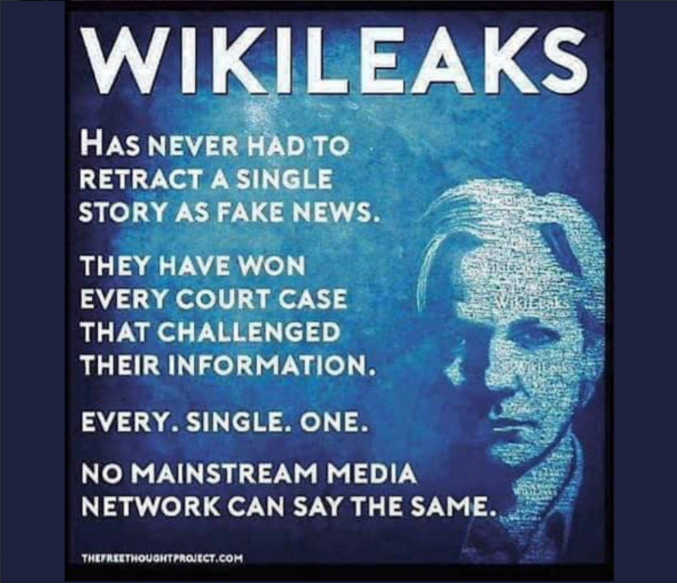 This is a breaking news story, and it is shocking to say the least.  It was broken by The Hill’s contributor, John Solomon.

In March of 2017, a ‘behind the scenes’ deal to negotiate with Julian Assange was in the works.  It was essentially brokered to persuade Assange to the redaction of agency personnel in hostile jurisdictions and foreign espionage risks to WikiLeaks staff.

This was when Wikileaks was ready to publish the Vault of tools used by United States Intelligence Community to spy on the population and whomever they chose.

Those involved in this shocking story were James Comey,  Sen. Mark Warner (D-Va,), Department of Justice (DOJ) official Bruce Ohr, and Julian Assange.  American attorney, Adam Waldman, was, also a key figure throughout the failed attempt at the deal between Assange and the U.S. Intelligence Community.

Assange offered to discuss technical evidence ruling out certain parties in the controversial leak of Democratic Party emails to WikiLeaks during the 2016 election. The U.S. government believes those emails were hacked by Russia; Assange insists they did not come from Moscow.

Yes, you read that right, Assange was willing  to give technical evidence to this team of United States officials that Russia did not hack the DNC.  Of course, one cannot help but think of Seth Rich and the high probability he was the leaker. If you can believe it, the United States officials involved in communicating with Assange were about to the receive the ‘keys to the kingdom.’

In the spring of 2017, one of Julian Assange’s lawyers Adam Waldman negotiated with the Justice Department on a possible deal to get the WikiLeaks founder limited immunity and safe passage out of a London embassy to talk with U.S. officials.

In return, Assange would provide technical information to the U.S. ruling out certain suspects in the release of hacked DNC emails key to the Russia case, identify vulnerabilities in the CIA’s computer systems and talk about measures to protect certain sensitive information in future releases by Wikileaks.

The outlines of the deal were memorialized in a March 28, 2017 email between Waldman and Justice Department counterintelligence section chief David Laufman.

Here is the text of that email:

“Subject to adequate and binding protections, including but not limited to an acceptable immunity and safe passage agreement, Mr. Assange welcomes the opportunity to discuss with the U.S. government risk mitigation approaches relating to CIA documents in WikiLeaks’ possession or control, such as the redaction of agency personnel in hostile jurisdictions and foreign espionage risks to WikiLeaks staff,” Waldman wrote Laufman on March 28, 2017.

“Derived directly from this discussion of risk mitigation, Mr. Assange is also prepared to discuss (within the source protection boundaries expected of a journalist and publisher operating at the highest level of integrity) (i) a description of CIA information in the possession or control of WikiLeaks; (ii) the risks of third parties who may have obtained access to such information (not withstanding the foregoing, for the avoidance of doubt this category specifically and others generally will not include any information that may effect WikiLeaks obligations to protect its sources) and (iii) information regarding the timing of further publications in so far as they relate to the risk mitigation approaches developed.”

So as you can see, the United States had the opportunity to discover technical evidence that Russia had not hacked the DNC.  Who would want to stop this?

James Comey told Warner to ‘stand down’ on the deal with Julian Assange; thus, Assange unleashed a series of leaks that U.S. officials say damaged their cyber warfare capabilities for a long time to come.

This intervention by James Comey must be recognized for what it was – an intentional suppression of technical evidence, which could have prevented the witch hunt against President Trump.  It, also, might have led to the true DNC leaker’s identity.

In my opinion,  this is absolute proof that James Comey is guilty of suppressing evidence, which was a part of the attempt by the Deep State to destroy the Trump Presidency.

We can confirm the accuracy of the Hill report on Comey, however, it should be noted that 'immunity/safe passage' was limited to covering the talks.

For background see Vault7: t.co/6PEgsXDfEi
and this Assage OpEd in WaPo: t.co/6t8y2pKBMRt.co/gMcIgvT2x9

‘We can confirm the accuracy of the Hill report on Comey, however, it should be noted that ‘immunity/safe passage’ was limited to covering the talks.

In conclusion, this is so new I could not find a video to support it.  I want to thank THE HILL AND JOHN SOLOMON for their amazing work.