Countries that install a lot of wind and solar must raise the price of electricity. British Steel had good sales, but the expense of the escalating electricity price ate up all their profits. Large business’s that compete globally can’t do so when the cost of energy exceeds by a wide margin that in foreign countries. Germany and South Australia have seen business’s leave or go bankrupt as electricity costs skyrocket.

“If we look at the company’s latest annual report, we find that the company went from a profit of £92 million in FY ending 2017 to a £19 million loss in FY ending 2018. To douse water on the Brexit claims, the company’s revenues actually increased 11% year-over-year. The real problem was the company’s expenses bloated by a tremendous 25% over the same period. The steel production process is energy intensive, so a significant portion of this price increase is related to a sharp spike in energy prices in the UK over late 2017 to early 2018. The second major cost driver is British Steel was no longer able to delay paying for the EU’s mandatory cap-and-trade policy. Under the cap-and-trade system, companies were able to pull forward future credits to pay for current years. British Steel’s future credits ran out in 2018 and were facing a £100 million bill to cover their 2018 charges. This amount represents a full 10% of the company’s annual revenue base and was so large thatthe company requested the British Government to provide a loan to cover the costs as the company only has around £5 million in cash to make such a payment. A good deal of the aforementioned energy price spike is also related to the EU’s cap-and-trade regime becoming more aggressive as it moves into the 2021-2030 phase of the program .”

Germany is the poster child for bankrupting business’s by installing costly wind and solar. Here is a businessman that presides over a 7 generation tool making company:

Dr. Karl Tack is a managing director of a family-owned business that manufactures grinding tools. The company has been in operation over 7 generations and is just one of many that operate all across Germany.

According to Blick aktuell here, family-owned businesses make up 90% of the country’s number of privately owned companies. These German family-run businesses are often innovative, are export powerhouses over a broad range of niche sectors, and not surprisingly they are a major part of the German economic back bone. They are a critical pillar of Germany’s 3-trillion-euro economy.

Tack is also a board member of the industry association Die Familienunternehmer — family business owners — which represents 6000 family operated businesses in Germany with combined annual sales of 460 billion euros, reports the online Blick aktuell here. He is also the Chairman of the association’s energy policy commission.

The Association of Family Business Owners stands by the values of freedom, property, competition and responsibility.

The success of family-run companies is not only dependent on world-class innovation, but also on a business-friendly environment. Lately, however, Germany’s energy supply has gone from being an asset to one that is now a burden for many. And as a member of the board of family-owned companies, Tack wishes “to shift his focus on energy policy“, Blick writes.

The Energiewende [transition to green energies] ushered in by the German government has resulted in electricity becoming massively more expensive. The long-term consequence: Jobs are being lost, investments being moved to foreign countries and the industrial base is slowly being destroyed. Policymaking has also failed with its climate-political goals. The high-wire act of climate protection targets and efficient support programs has failed spectacularly“. 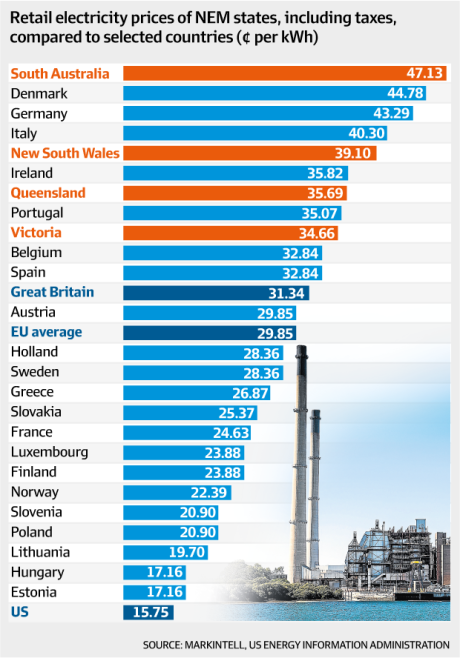 It’s a relationship for which the economic backwater has become world renowned. Along with its notoriety as a (notionally) first world economy with a third world power supply.

If you’re looking to attack the infantile nonsense of running an economy on sunshine and breezes, then routine load shedding and mass blackouts will do it every time.