I’m going to show you a chart based on data that the Atlanta Fed released today. We’ll dissect it in a moment. The chart would be funny, if it weren’t so serious. At first, just look at the chart superficially. These results are based on surveys of businesses of a wide variety of sizes, spread across all sectors of the economy (except agriculture and government), in all regions of the US. They’re asked about their own businesses, in terms of sales, employment, and capital investment over the next 12 months. And the chart also shows how uncertain the participants are about their own expectations.

So this is about expectations for their own businesses, and about the uncertainty of their own expectations. For now, just look at the chart without analyzing it: It shows better than just about anything else what mess businesses face going forward: Their world has gone haywire. 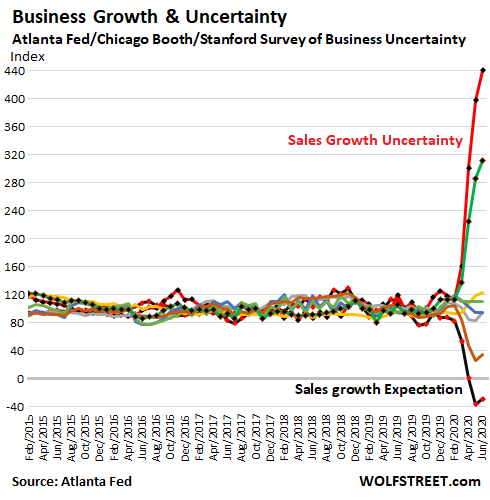 The pandemic has hit businesses differently. Some businesses have reported booms in demand because of the shifts cause by the lockdowns and other factors, and they have trouble keeping up. Other businesses are in a state of collapse or have filed for bankruptcy. And then there’s every business in between. And these results are the averages of the pandemic’s winners and losers combined.

There are two factors here in the Atlanta Fed/Chicago Booth/Stanford Survey of Business Uncertainty: These companies’ expectations; and their uncertainty about their own expectations.

Expectations of sales growth over the next 12 months (red line in the chart below has been trending down since November 2018 (high of 128.5). This was later borne out by the slowing economy. Those expectations were already low before the pandemic hit in December 2019 (86.7), indicating a further slowdown of the economy for 2020, and remained roughly in that range in January and February.

Expectations about growth for capital investment (green line) and employment (black line) over the next 12 months declined in March, April, and May, but didn’t collapse. And both ticked up in June. 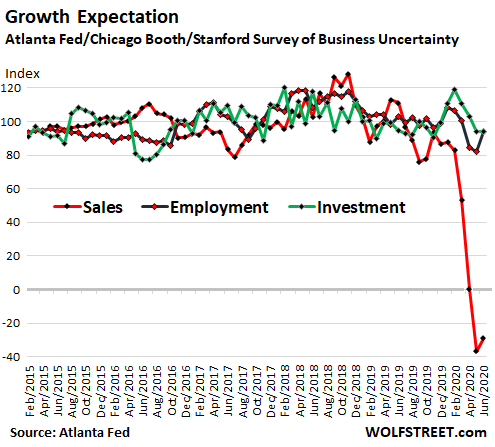 Each of the indices captures the direction and magnitude of how these companies expect sales, employment, and capital investment to change over the next 12 months. The indices have been set with a mean of 100 from January 2015 through December 2018.

Uncertainty about of those expectations.

In comparison, the uncertainty about their employment expectations remained relatively low, but nevertheless ticked up in June the highest level in the data series. Uncertainty about investment remained range-bound: 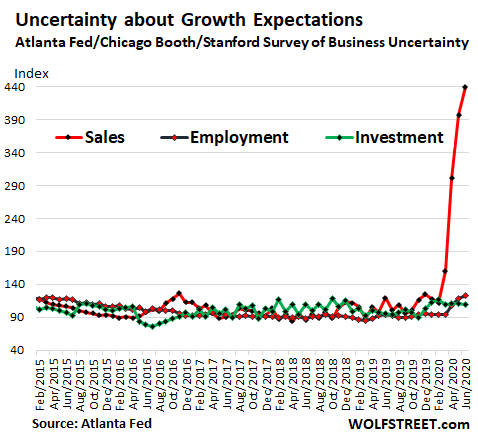 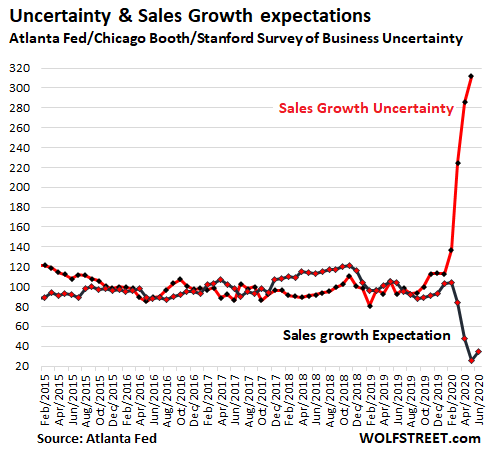 What these businesses are saying is this: They took a big hit in sales and in June still expected those sales to remain at low levels for the next 12 months, but they have no visibility over those 12 months, and have no clue how this will turn out, and lack any kind of confidence in their own expectations of where sales might go.

Practically by definition, a business decision maker has to expect sales growth, and has to figure out how to make it happen. That’s part of the job.

But unless visibility increases and certainty about their own expectations increases, it’s going to be tough to plan and make long-term decisions with confidence. From a business point of view, this is a mess.