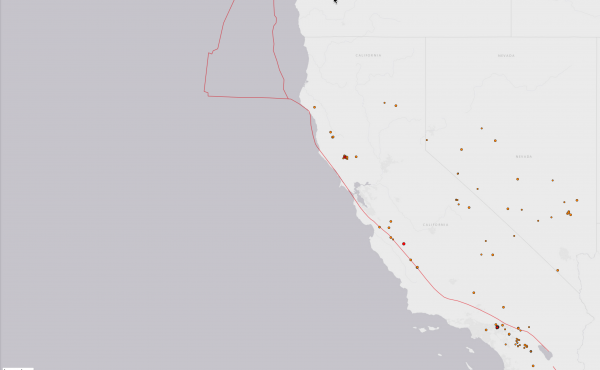 The unusual shaking on the west coast continues to intensify. As you can see from this map, 240 earthquakes have struck the states of California and Nevada over the last 24 hours. Yes, the west coast gets hit by quakes every day, but this is definitely an unusually high number. Fortunately, most of the earthquakes have been very small, but a couple of them were greater than magnitude 3.0. The following comes from the Los Angeles Times…

A magnitude 3.3 earthquake was felt in parts of Southern California on Sunday afternoon, one in a series of quakes to hit the Riverside County area.

The latest quake occurred at 4:36 p.m. and was centered on Glen Avon, south of Fontana. The seismic activity continued into Monday morning with dozens of new small quakes.

According to the U.S. Geological Survey, the quakes were felt across swaths of the Inland Empire, a region that has had hundreds of small quakes over the weekend, including one that registered a magnitude of 3.1.

This comes during a stretch of time when there has been a heightened level of seismic activity along the west coast. For much more on this please see my previous article entitled “California Is Shaken By More Than 80 Earthquakes As Chile Is Hit By The Largest Quake In 12 Years”. So when I got this latest news, I wanted to get this update out to you all right away.

Hopefully it will not happen immediately, but at some point there will be a history-altering earthquake along the southern California coastline that will cause death and destruction on a scale that most of us don’t even want to think about right now.

In fact, scientists have specifically warned us that someday a colossal earthquake “could plunge large parts of California into the sea almost instantly”.

Unfortunately, most California residents will not care about these warnings until it is too late to do anything about them.