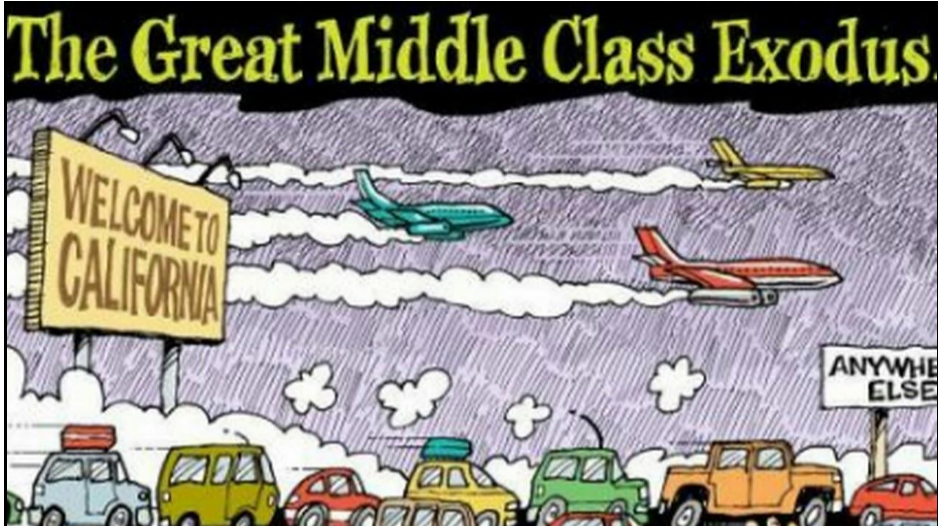 If California is the gold standard among the 50 states in the country, then why are thousands leaving every year for lower taxed, less regulated, less Democrat-dominated locales?

Reading the DC/NY-centric press, the Golden State is regularly held up as a role model for America. But the mainstream media always fails to report on the mass exodus of struggling Californians leaving at a higher and higher rate each year. Particularly, many young parents and families are picking up and moving somewhere else because they have simply been priced out of the state.

According to the American Community Survey, California’s net domestic out-migration has almost tripled to 140,000 annually since 2010. Over the last seven and a half years, the state has lost about a million people, with a great number of that coming from the Los Angeles area.

Before the recession, the Bay Area enjoyed a wave of new residents. Today, almost half of Bay Area residents are planning to move out of the most expensive place to live in the country in the next three years. A February 2018 Redfin report found that the Bay Area leads the country in outbound home searches.

What is most alarming for California’s future is the out-migration of middle class, middle-aged families.

Furthermore, the largest group leaving the state are people aged 35 to 44, the prime ages for family formation. Another third of those leaving were 26 to 34 or 45 to 54. Tough to raise a family in a state that is becoming unlivable and unaffordable.

California has simply gotten too expensive. People are being priced out of the state and have had enough of high taxes, poor schools, congestion, homelessness, sanctuary cities, and bullet trains to nowhere. The coastal areas of California are only affordable to about 15 percent of Californians, which is down from 30 percent in 2000. California’s home prices are well over double the average price for a house in the rest of the country. The average monthly mortgage for a starter home in LA or San Francisco costs around 40 percent of one’s income, versus 15 percent nationally.

With all of this bearing down on Californians trying to make a living, many, especially younger residents, are giving up the sunshine and for greener pastures in places such as Utah, Texas, and Tennessee, which are seeing massive surges in Millennial populations. Many, from both in and out of the state, to up-and-coming and extremely affordable Sacramento, which ranked third in the nation in net Millennial migration in 2016, according to SmartAsset.

Californians are not dumb. They know they’re getting screwed. A recent USC Downside/LA Times poll revealed that 17 percent believe the state’s current generation is doing better than previous ones while 50 percent thought younger Californians were doing worse. In addition, a UCLA Luskin School survey found that 18 to 29 year olds were the least satisfied with life in LA while older Californians were much more at peace with their current circumstances. Up in the Bay Area, an Urban Land Institute study discovered that 74 percent of residents in the liberal capital of the country are considering a move to another location. Perhaps dense communities, rent controlled housing, and transit-oriented development are not all they’re cracked up to be?

And yet, with this demographic, economic, and political reality staring them in the face, California’s media elite and political leaders continue to tout the California Model and boast about its diversity and political correctness. They are too busy banning plastic straws to do anything about out of control housing costs or homelessness. They are too worried about protecting illegal immigrants to bother with creating a more business friendly environment to help legal Californians make ends meet. They are more attentive to passing laws to make sure women serve on corporate boards and building bullet trains no one wants instead of taking a hard look at how burdensome their tax system is and how it is driving out thousands of taxpayers every year.

There’s a mass exodus underway in California. But if you listen to Democratic candidate for Governor, Gavin Newsom, and other Democrats here you’d think everything is going great. It’s time for a change in Sacramento. We need new leadership. We need a state government that puts citizens first and makes real progress in making housing affordable again. We need to build more. We don’t need rent control. Newsom will be more of the same when he is elected in November. God help us all when that happens.