There are 18 active wildfires in California right now. A layer of haze and smoke has engulfed much of Northern California. The Carr Fire in Redding over the last week has already claimed two firefighters and at least four residents’ lives, and 1,500 homes have been destroyed. More recently, two fires in Lake County, which surged 25 percent in size on Friday night, became the largest fire in the state at more than 229,000 acres. Called the Mendocino Complex Fire, the Lake County fire has grown to more than two-thirds the size of Los Angeles.

Unrelenting winds, low humidity, dry and dense forests, and temperatures in the 90s have provided perfect conditions for the fires to grow. Firefighters are spread thin battling this devastating fire season in California. Both the Carr Fire and Mendocino Complex Fire are well less than 50 percent contained as of this writing and at least seven people have died. The Mendocino Complex Fire threatens 12,300 structures and almost than 20,000 people are under evacuation warning. The Carr Fire was ignited by a tire blowout just over a week ago on a road 10 miles west of Redding, a city of about 92,000.

More than 290,000 acres have burned in California so far this year, more than double the five-year average, according to Cal Fire. The Golden State is on fire and the smoky skies have been hard to take here in Sacramento where I write this and the haze has drifted south throughout the Central Valley. But the Western U.S. is also feeling the burn with 14 states currently reporting wildfires, in addition to fires underway in both Texas and Florida. 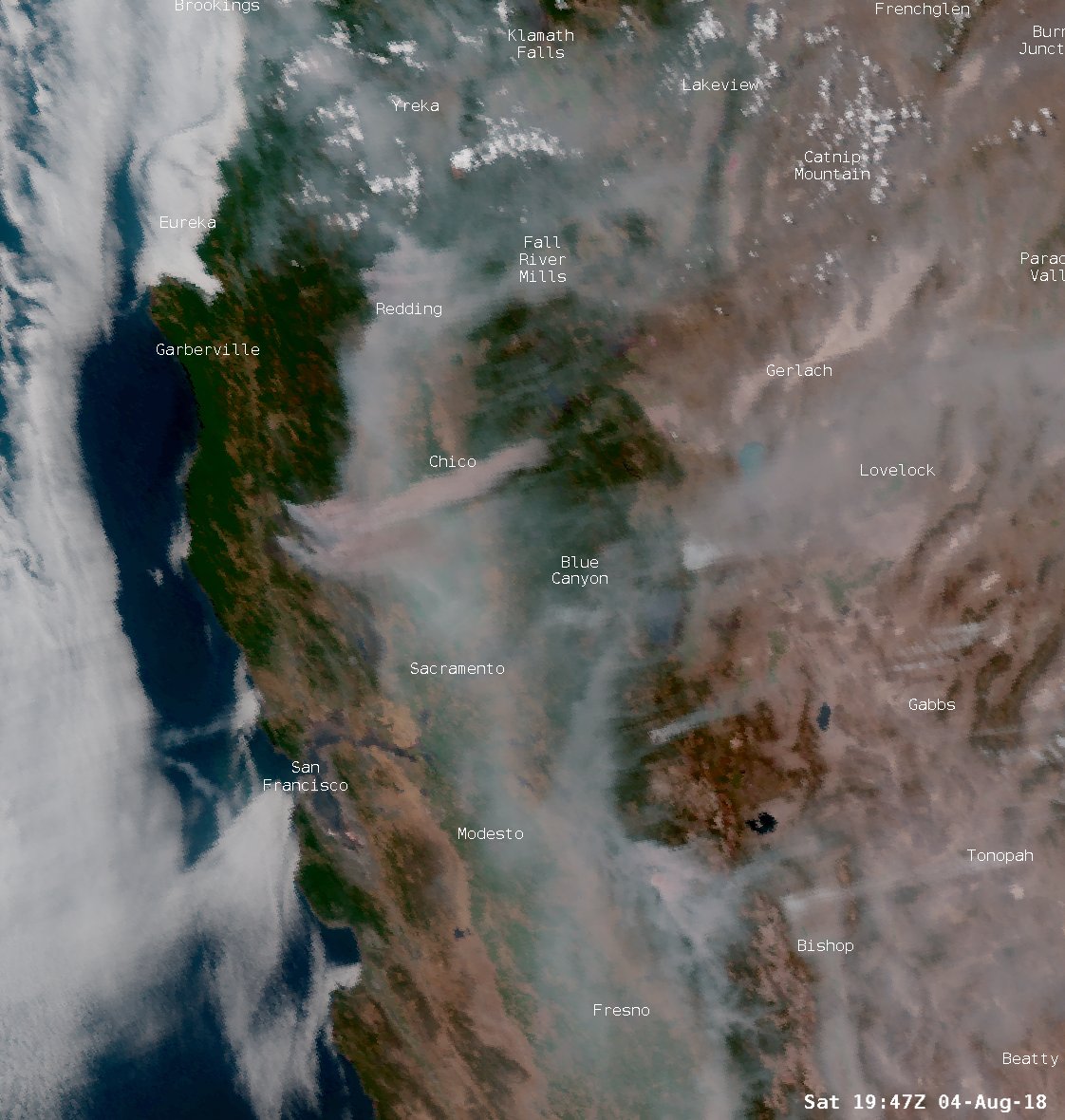 And while California is busy outlawing plastic straws, authorities have still not learned how to properly warn residents of the coming fires.

In western Redding, a great tragedy occurred. When the flames were approaching, Shasta County issued mandatory evacuation orders, but not everyone got the message. Some people did not know of the coming danger to their lives and maybe that is their fault, but authorities should still do everything necessary to ensure everyone knows they need to leave the area. Sadly, a woman and her two great grandchildren were trapped in their home when the fire came to their property. All three died.

Shasta County officials claim they did all they could to alert residents, using social media, reverse 911 calls, and public announcements. But they acknowledged there may have been some that were not aware and did not receive the message.

“It’s highly possible they didn’t get a notification,” said Sherry Bartolo, operations manager for Shasta County’s emergency dispatch system. “In my 38-year career, I’ve never had anything that was that devastating to my staff. Now I know what Napa and Santa Rosa and those agencies went through. I couldn’t imagine it until I went through it.”

More than 40 people died last October when fires swept through wine country in Napa and Sonoma County. More than 10,000 homes have been lost to wildfires since the start of 2018. And we have still not found out how to properly warn all residents.

California’s emergency alert system needs to be improved. The government and its host of agencies that we pay for with our many tax dollars have to protect us. That is and should be their number one priority.

“This is not a perfect world, but people like me think there’s a way to lessen the loss of life,” said Richard Rudman, vice chair of California’s Emergency Alert System. “We need an overall learning strategy so everyone is reading out of the same playbook.”

Disasters in Napa and elsewhere have given officials plenty of time and data to sift through in order to improve the emergency alert process, but it appears that little to no progress has been made on this front. A state report released last year wrote that Sonoma County emergency managers failed to use all means at their disposal to warn residents during last October’s deadly and devastating fire. Evacuation orders were sent out to only a fraction of the residents and the rapidly moving fire left entire communities in the dark about the coming danger to their lives.

The Shasta County sheriff said authorities alerted residents using door-to-door notifications as well as loudspeakers on emergency vehicles. But tragic stories of families caught unaware proves these methods are not getting the job done. Authorities also use electronic means, such as an emergency alert system on local news channels and an automated calling system targeting phones within a certain geographic area. The Integrated Public Alert and Warning System, another method, can be used to call or text any cell phone within reach of a particular transmission tower. However, the automated calling system is designed to dial landlines, which are hardly used anymore, and residents must register their cell phones if they are to receive alerts. I didn’t know that and I doubt many others in the fire-affected areas did. Public outreach on this needs to be better if we are to ensure less deaths from these fires in the future.

Why are all these fires happening and why are they so much worse than years past? Sure, the climate has something to do with it. It is a hot, dry summer. But the climate is always changing. In addition, we barely had any rainfall in California over the last year, creating very dry conditions this summer. And finally, fires used to run their course throughout history, but in modern times, with sizable populations residing throughout the state, fires are put out quickly and forests therefore become more dense and burn up much more swiftly than they did when fires trimmed down the many forests in the state. 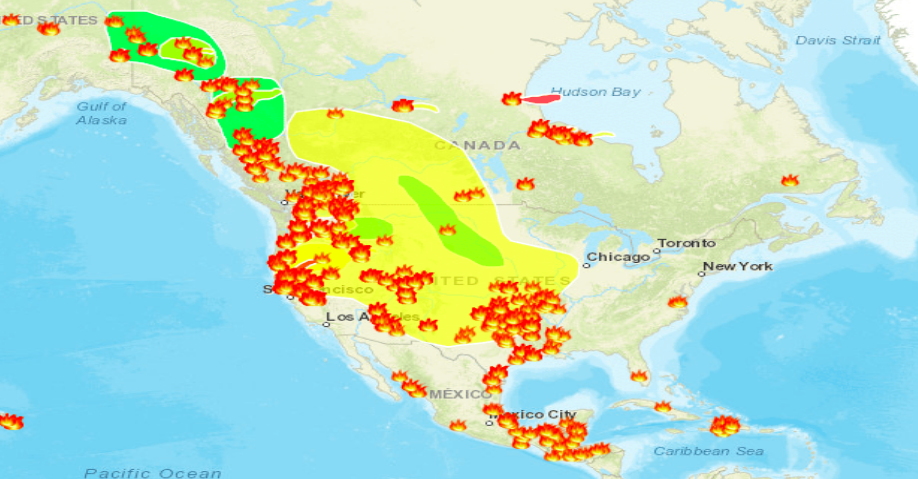 Climate change is not the reason for the wildfires, despite the howling from climate alarmists like Governor Jerry Brown and his green energy cabal in Sacramento. It is population growth. It is the stupidity of the human race.

The raging wildfires in Northern California are a “new normal,” said Jerry Brown on Wednesday. Though he does mention the state’s exploding population as a contributing factor to the ravaging fires, he also claimed that climate change has been the reason for the blazes.

More than 12,000 firefighters and even 3,000 prison inmates are battling the massive fires in the state. And it seems they are growing day by day in number and size. But it’s not global warming, it’s not climate change, it is population growth that is the culprit. More people living in California puts more people at risk and more people who are able to start fires.

The Carr Fire is now the 6th most destructive in California’s history.

But how are these fires started in the first place?

The virtue signalling left would breathlessly claim that the fires are happening because of climate change. But that is a laughable assertion. Here’s the real reason: 90 percent of the fires that are burning in the U.S. right now and in recent years have been caused by people, either through carelessness, accident, or deliberate action.

Here’s what the U.S. Department of Interior said:

“Wildfires can be caused by nature — mostly due to lightning strikes — but the vast majority are caused by humans. Research estimates that 90 percent of wildland fires in the United States are caused by people. Some human-caused fires result from campfires left unattended, the burning of debris, and intentional acts of arson. It can also be caused unintentionally by heat and sparks from vehicles and equipment. Public education and personal responsibility can greatly reduce the number of wildfires each year.”

Human beings are careless, reckless, and idiotic. Add onto that the fact that it is hot and dry and the forests are dense and you have a recipe for disaster. Environmentalists, especially in California, have done everything they can to protect the forests, which has actually led to their destruction. Lack of competent forest management has created unnaturally dense forests that go up in flames with the amount of trees packed in close together. All it needs is a spark.

Wildfires have always happened and have always been Mother Earth’s go-to method of forest management. Again, the Department of Interior:

“Fire has always been a natural process that is essential to healthy ecological systems. In the early 1900s, land management agencies sought to suppress all fires in an effort to preserve the timber supply. Over the decades, fire exclusion led to more living and dead vegetation on the landscape, increasing the fuel and as a result, the risk of large wildfires in our forests, rangelands, and near communities.”

Fires had to be put out with California adding a millions of new residents over the last century to protect communities from the flames. But environmentalists went way overboard in protecting the forests. Fires are a valuable tool for forest regeneration. It renews the soil and resets the clock for a new and vibrant forest. But that has not been allowed to happen since the early 20th Century and we are paying the price for it now. Controlled burns are a thing of the past as air quality and “forest protection” are elevated above healthy forests. Without these fires cleaning out the forests and setting them up to start again, we have a massive layer of brush and ground litter, prime conditions for rapidly growing fires in California when paired with an on-and-off again drought over the last decade.

Humans have carelessly caused almost all of the fires in the U.S. Only YOU can prevent wildfires. To make matters worse, a third of the country’s population lives in areas that are much more prone for forest fires. As our population continues to grow and a sizable chunk still resides in more rural areas outside of the city and closer to dense forests, a great number of Americans will need to start carrying fire insurance (if they can get it) as they are at greater risk for their home being engulfed in flames.

So spare me the climate change rhetoric. Enough with the authorities have done all they can. Our firefighters are brave men and women are literally trying to save our homes and lives. But our government officials need to do more to keep us safe and alert us to quickly growing wildfires.

The deadly and devastating fires across California have wrecked many homes and only seem to be growing in size despite the best efforts of our firefighters. These fires were caused by humans, not climate change, and environmentalists’ insistence on letting the forests grow instead of the occasional controlled burn have only added fuel to the fire.

Human beings are starting the fires and only we can stop them.