To plagiarize T.S. Eliot, April is the cruelest month. But not for the reasons the poet wrote. Rather, for all the taxes.

And there are bills in the Legislature to make taxes sting even worse.

By April 10, Californians must pay their local property taxes. Five days later is the deadline for filing state and federal income tax returns. Also, the state and the feds want any initial pre-tax payment that’s required on current earnings.

So tax collectors get three swings at us this month.

It’s a perfect storm for millions of Californians because of the federal tax overhaul enacted in 2017 by the Republican Congress and President Trump. For the first time, deductions for state and local taxes on federal returns are limited to $10,000. That’s much less than Californians have been deducting in this high-tax state.

Making the bite even sharper for salaried employees who receive a W-2, non-reimbursed job expenses are no longer deductible on federal returns. That hits teachers particularly hard because they often buy their own classroom supplies and have been deducting the costs.

So blame that tax shaft on Trump and Republicans.

But in California under Democrats, it’s tax, tax, tax — a drip and a drop, nickel and a dime — all the time. That’s not a political statement. It’s a fact.

Not all taxes are evil. Some are justified. But many are unwarranted. And others are eye-rollers. 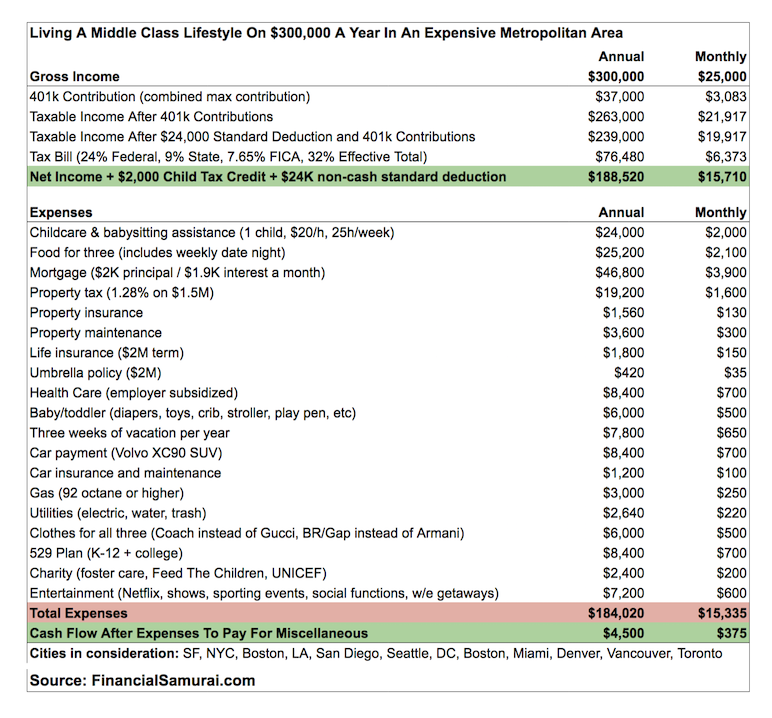 With the median price of a home in the U.S. at $300,000, you can can achieve homeownership and the idealized middle-class lifestyle in most parts of the country making a salary just under or above six figures.

In San Francisco’s land of $2 million fixer-uppers, the income needed to reach this status is obviously more. But how much more?

S.F.-based finance expert Sam Dogen pinned that number at $300,000, after surveying dozens of readers on his Financial Samurai blog and asking about their incomes and expenses living in the notoriously high-priced coastal cities.

With their feedback, Dogen broke down the budget of a couple with one to two children in San Francisco, Seattle or New York. He found $300,000 is the income necessary to put something away for retirement, save for your child’s education, own a three-bedroom home, take three weeks of vacation a year and retire by a reasonable age.

have at least one car, have a kid or two. There are no private jets in this budget.”

Dogen has put together a detailed blog post where you’ll find analysis and explanation on each expense, but here are a few points to note: