On August 11th, 2017, Tesla (TSLA) issued its inaugural unsecured high yield debt issuance. The $1.8B issue was priced to yield 5.3% and mature in eight years in August 2025. At this point, Tesla has paid just one semi-annual coupon, paying investors in April 2018 $26.50 on every $1000 invested. This paltry payment has been dwarfed by the $125 in market value the bonds have fallen in the interim as seen in the price graph below. 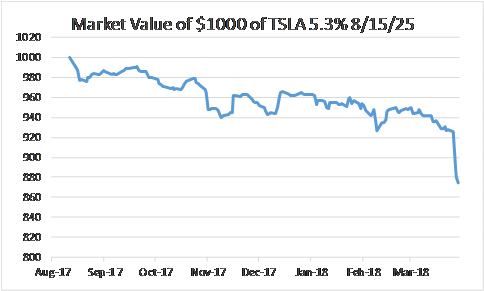 (Prices and figures in this article are as of last week’s close before Monday’s continued sell-off).

The market has re-priced the creditworthiness of Tesla over the past 7 months. Investors will not only pay around $875 to earn that 5.3% of annual interest payments, producing a yield of roughly 7.5%. Moody’s (MCO) has also re-assessed its view of the creditworthiness of Telsa, downgrading the bonds from B3 to Caa1 with a negative outlook last week. Moody’s cited “the likelihood that Tesla will have to undertake a large, near-term capital raise in order to refund maturing obligations”. The rating agency sees a near-term cash need exceeding $2 billion, an amount greater than the totality of the initial debt issuance.

I continue to find the Tesla bonds fascinating. Even though the company has shed $15B of market capitalization (roughly 25%) since the debt deal first printed last August, its current $45B market capitalization is still unique for the high yield corporate bond market. Companies with that type of equity market capitalization usually do not carry speculative grade ratings, and certainly not CCC ratings – the lowest ratings cohort in the junk universe.

There is still an ocean of equity underneath your debt, but investors in the equity should be wary of how the bond market is pricing default risk on these bonds. Since the debut debt issuance, performance has been poor. Delays in the ramp of the Model 3, resultant operational cash burn, a fatal crash involving a Tesla Model X SUV with Autopilot engaged, and the recent recall of 123,000 Model S sedans all have tempered optimism for the stock.

At a 5.3% yield at issuance, I wrote at the time that investors were not being compensated for the risk in this business. With the yield at 7.5%, it is still not intriguing enough to get me involved. The risk/return proposition for high yield bonds is inherently negatively convex. If things go well, you get paid your coupon and eventually get your principal back, perhaps at a small premium if the bond is called. If things go poorly, you could lose a substantial portion of your principal, a fact that the market is increasingly pricing into this bond issue. This particular bond deal is unique in that the company’s Gigafactory is not part of the collateral package, remaining unencumbered by the possibility that it could be pledged to secure future debt without securing these notes. This lack of security potentially makes the recovery worse in a distressed situation.

Not liking the debt does not automatically mean that you do not like the equity. Equityholders are not plagued by the negative convexity faced by bondholders. They own the upside, and the prospect of Tesla revolutionizing transportation and renewable energy markets is tantalizing. Shareholders, though, have already baked in tremendous growth and healthy operating cash flow into the share price. Even with the recent swoon, this company is still trading at a high price. It currently has the same market capitalization as Ford (F), but produced only 7% of the revenue over the trailing 12 months. Ford produced more EBITDA than Tesla produced revenue. The uniquely low ratings on the debt for a company with this large of an equity capitalization should give bullish shareholders at least a little pause. Despite the selloff for both the equity and debt, at current valuation levels, I cannot recommend either. The sell-off has not made Tesla’s debt cheap, it has highlighted how expensive it truly was at issuance.