Central Banks Now Own 33% of All Global Sovereign Debt

Because who else would buy it?
You can get trapped in a liquidity event even when you hold something very valuable if you need to sell with urgency and the market for what you hold is thin. What happens when what you hold is worthless and the market for what you hold is nil?
The total assets of all central banks hit $16.4 trillion plus (an all-time high) and these banks now, collectively, own 33 percent of all the world’s sovereign bonds (someone/something had to buy ‘em) up from 14 percent before the ’08 crisis.
On CNBC, Rick Santelli’s question to Jim Bianco was, if the aggregate size of the world’s central banks is at an all-time high, and these banks have purchased a third of all government paper, will these banks be able to “normalize in size” (shrink) without “going through a lot more stock market anguish?” Bianco’s response was a flat, “no.” 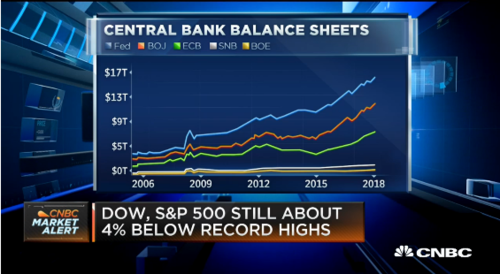 Surely central bankers aren’t just speculating with funds created from nowhere? However, the once “lenders of last resort” are now engaging in social policies, boosting the collective wealth effect, while keeping the under-capitalized, over-leveraged, and less than competent operators in business.

02/09/2018
Back in 2011, Standard & Poors’ shocked the world, and the Obama administration, when it dared to downgrade the US from its vaunted AAA rating, something that had never happened before (and led to the resignation of S&P’s CEO and a dramatic crackdown on the rating agency led by Tim Geithner).
Nearly seven years later, with the US on the verge of another government shutdown and debt ceiling breach (with the agreement reached only after the midnight hour, literally) this time it is Warren Buffett’s own rating agency, Moody’s, which on Friday morning warned Trump that he too should prepare for a downgrade form the one rater that kept quiet in 2011. The reason: Trump’s – and the Republicans and Democrats – aggressive fiscal policies which will sink the US even deeper into debt insolvency, while widening the budget deficit, resulting in “meaningful fiscal deterioration.”
In short: a US downgrade due to Trumponomics is inevitable. And incidentally, with today’s 2-year debt ceiling extension, it means that once total US debt resets at end of day – unburdened by the debt ceiling – it will be at or just shy of $21 trillion.