It pays to climb to the top of the corporate ladder. A lot.

There are two ways that companies compensate their CEOs: cash (including salaries, bonuses, restricted stock grants and other incentives) and stock options. Which method results in the highest total payout depends on a number of factors, including how the company’s stock price is doing at the time and if the boss cashes in the stock right away or decides to wait. We created a new timeline to understand how these last two factors have changed over the years. 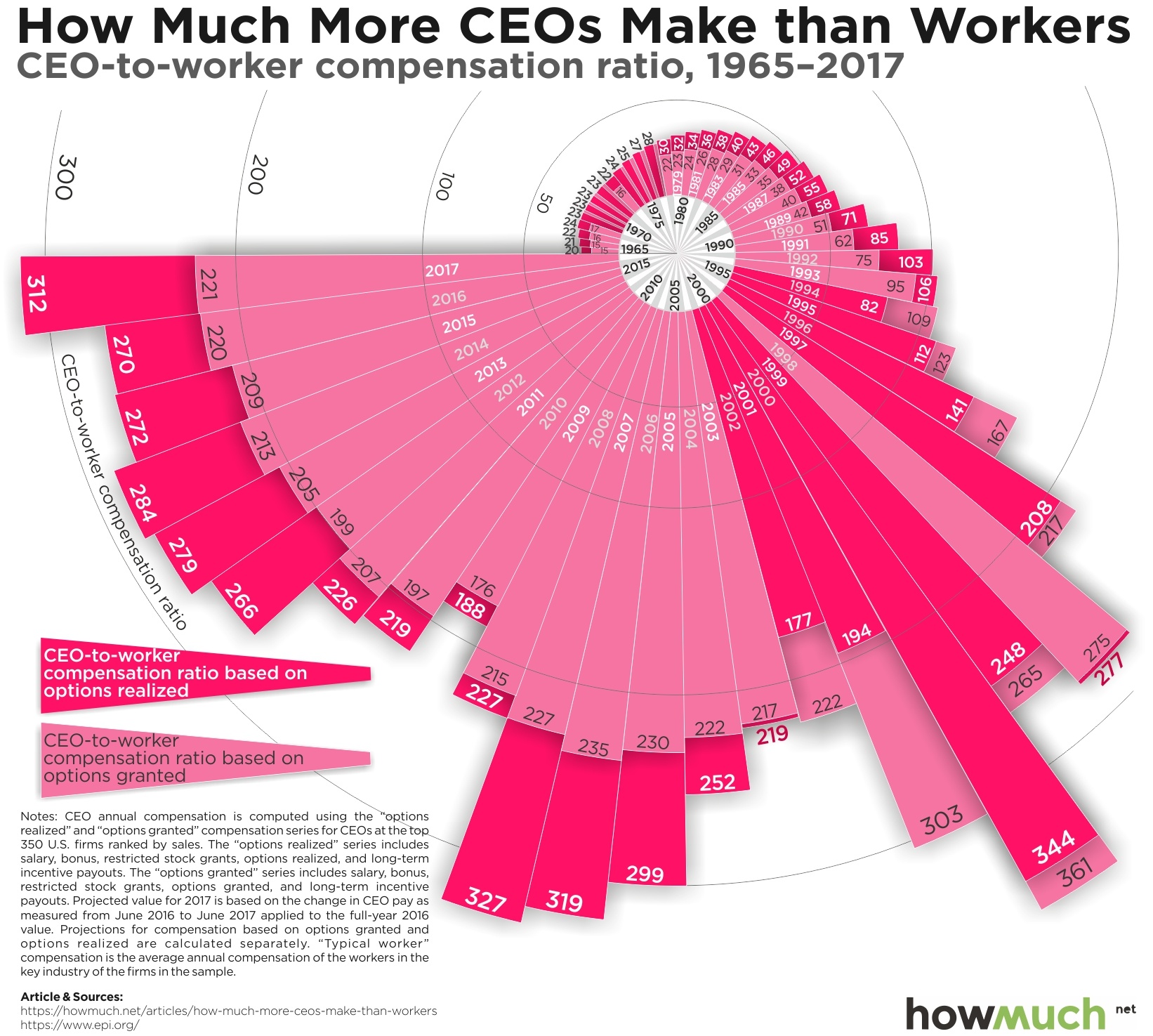 Think of our new visualization as a spiraling timeline. We gathered CEO-to-worker compensation ratios from the Economic Policy Institute (EPI), a non-profit think tank focused on promoting the needs of low- and medium-income workers for public policy decisions. The EPI analyzed compensation figures for CEOs at 350 of the largest US companies based on sales from 1965 to 2017. They take into account the ratio as two numbers: as stock options realized (the dark red) and as options granted (the light pink).

Our visualization lets you easily and quickly see how both numbers have changed over the years as well as the overall pattern of exploding CEO compensation. No matter how you look at it, CEO’s have massively increased their compensation levels since 1965. Originally a mere 20x the pay of normal people, chief executives have enjoyed well over 200x almost every year since the 1990s. Somehow they are able to extract more money out of companies, whether measured as realized or gained stock options, while average workers are left with relatively little wage gains in comparison.

Despite the relentless upward trajectory of both numbers, there are a few interesting caveats. Look at the compensation numbers for 2009, the height of the Great Recession. CEO pay hit the lowest mark since 1996. Other years with economic recessions witnessed similar retreats, like after the dotcom bubble burst in 2000-01. We aren’t exactly shedding a tear for poor CEOs, however. They still took home well over 100 times more than the Average Joe.

See also  The Evergrande Situation really is Holy Moly - This is 20 times bigger than Archegos at the current levels - and looking to get much worse....

Perhaps the most interesting insight on our visualization is that CEO pay actually reached its highest level ever when compared to average workers in 2000. In other words, inequality used to be even worse that it is today. But consider this—the pay figures for the year 2000 seem quite anomalous and far out of line with previous years. By comparison, the numbers for 2017 seem relatively stable albeit higher than in years past. In other words, we suspect CEOs will continue to enjoy hefty incomes even if there’s a newrecession around the corner.