In an age of “unicorn” companies, which are private companies with billion-dollar valuations, and even trillion dollar companies, it can be difficult to mentally comprehendimportant financial metrics due to their enormity. Worldwide corporate profits are certainly one such measure, with many companies clearing hundreds of billions of dollars annually. 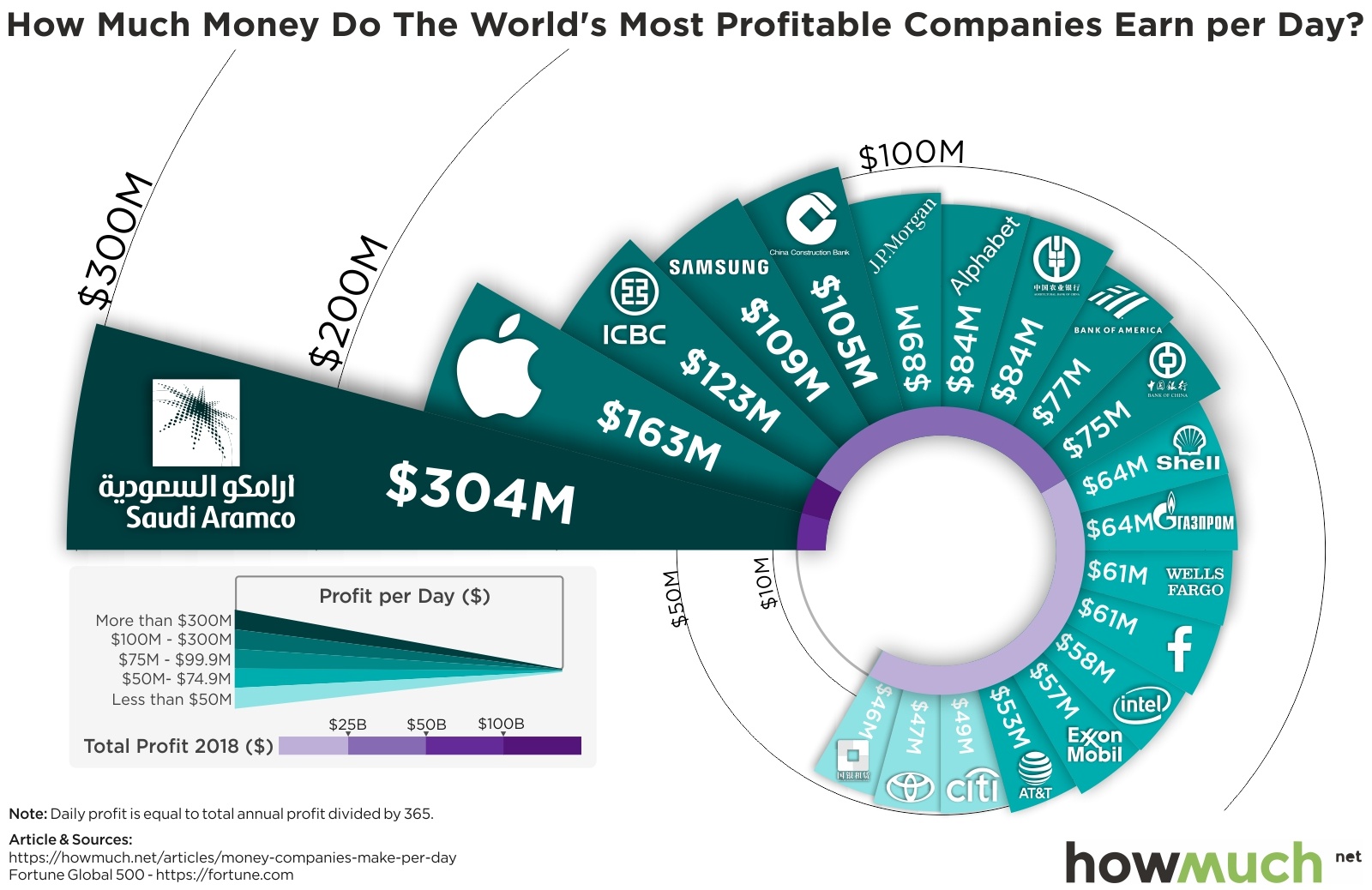 One way to make the enormity of annual profits more comprehensible is to instead measure daily profits, and we’ll take this strategy for our analysis. The data comes from the latest rankings of the Fortune Global 500. Our viz uses a radial stacked bar chart to compare the daily profits of the top twenty most profitable companies. A darker shade indicates a higher profit.

Daily Profits of the Ten Most Profitable Companies on Earth

To standardize the analysis of the world’s biggest corporate earnings, we’ve also calculated how long it takes each of the ten most profitable companies worldwide to earn $1 million in profits. It’s well under half an hour for each — by the time you’ve finished reading this article, you can count on tens of thousands more. Most of the top ten operate in either the banking or technology industries, with headquarters in the United States or Asia (namely, China).

The one exception: Saudi Aramco. The Saudi national energy company is the most profitable on earth, nearly doubling that of the second-place Apple. Saudi Aramco is going public in 2020, floating up to 10% of the company. This is planned in the face of recent attacks on its oil facilities and mounting tensions among Saudi Arabia, Iran and the United States, among other countries.

The Asian firms on the list, with the exception of Samsung, are state-owned Chinese banks. Amid the trade war with the United States, Chinese banks have been reluctant to lend. The Chinese central bank in response has left interest rates unchanged in the face of declining rates worldwide. These policies will have mixed effects on the profitability of these so-called “Big Four” Chinese banks.

Tech companies are also among the most profitable, and smartphones are key to two of the ten. Apple may be losing margins on phones as customers lean toward less expensive models. To counter this industry trend, Samsung is re-launching its $2,000 luxury foldable phone.

What surprises you about the data? Which is the most profitable company in your country? Did stating profits in terms of daily earnings help? Where are corporate earnings headed in the future? Let us know in the comments and share with your friends.