To say the coronavirus has taken a toll on the U.S. economy would be an understatement. At the end of 2019, the U.S. experienced the lowest unemployment levels in 50 years. But since COVID-19 swept the nation in mid-March, more than 47 million Americans have filed for unemployment and the country has entered a recession. How do today’s numbers compare to other major periods of unemployment? Our new visualization illustrates how unemployment rates have changed over time in relation to major events. 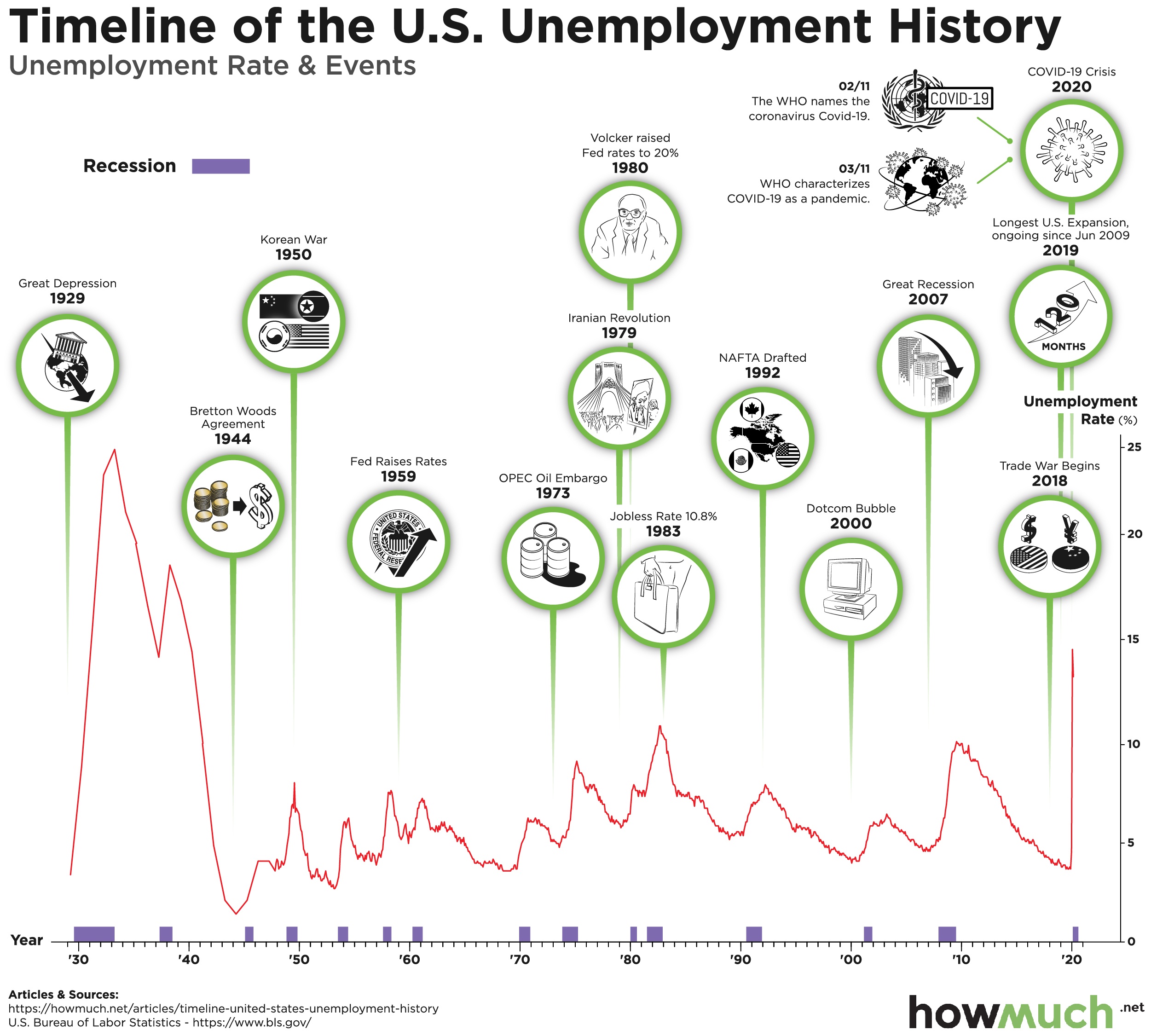 We gathered unemployment data over time from the Bureau of Labor Statistics, which is represented in the visualization by the red line graph. The horizontal axis represents the years 1929 – 2020, while the vertical access is the unemployment rate expressed as a percentage. We also included information about recessions, which are shown by the purple bars at the bottom of the graph to correspond with the years. To further situate unemployment rates in their historical context, we included major economic and political events that took place over the past 100 years. These are represented by the green circles above the line graph.

According to the Federal Reserve, the “natural rate of unemployment” (which accounts for the frictional, structural, and surplus unemployment that occurs in a healthy economy) is estimated to be between 3.5% – 4.5%. There will always be some unemployment because people are in-between jobs, or they are upskilling for new jobs because their old jobs are obsolete. However, the graph shows several noticeable periods when unemployment rates were much higher than the natural rate of unemployment. Not surprisingly, unemployment rates experienced a spike during depressions, recessions, and other major economic events such as the OPEC oil embargo in 1973, the Dotcom bubble in 2000, and most recently, the coronavirus outbreak in 2020.

Some states are bearing the brunt of COVID-19 losses more than others. According to CNN, Nevada is the hardest-hit state, with a 25.3% unemployment rate in May. Hospitality and tourism are significant drivers in Nevada’s economy, but these sectors have suffered as a result of stay-at-home orders around the country. By contrast, Nebraska had the lowest unemployment rate in May, at 5.2%.

Yet there is some hope on the horizon. Even though the nationwide unemployment rate reached 14.7% in April, it dropped to 13.3% in May. Furthermore, economists predict that the unemployment rate dipped even further in June, while also adding 3 million jobs. The coronavirus outbreak is still far from over, and further effects on the economy remain to be seen.

Want to read more of our coronavirus coverage? Check out our breakdown of coronavirus stimulus programs around the world and the impact of COVID-19 on the world’s major stock indexes.